From Infogalactic: the planetary knowledge core
(Redirected from Airbus A310-300)
Jump to: navigation, search
"A310" redirects here. For other uses, see A310 (disambiguation).

The Airbus A310 is a medium- to long-range twin-engined wide-body jet airliner that was developed and manufactured by Airbus. Released in 1983, it was the second aircraft to enter production by Airbus Industrie,Note 1 the consortium of European aerospace companies now a subsidiary of Airbus Group. The A310 is a derivative of the Airbus A300, the first twin-engined widebody airliner.

During the development of the original Airbus A300, a range of aircraft size and capacity were studied; the resulting Airbus A300B was one of the smaller options. When the A300B1 prototypes emerged, a number of airlines asked for greater capacity, which resulted in the initial production A300B2 version. As the A300 entered service, it became increasingly apparent that there was also a sizable market for a smaller aircraft; some operators did not have enough traffic to justify the relatively large A300, others wanted more frequency or lower aircraft-mile costs at the expense of higher seat-mile cost, (specifically Swissair and Lufthansa).[3]

Airbus reduced the Research & Development costs of a smaller A300 to a minimum, studying several early projects called A300B10MC (Minimum Change). Capacity was reduced to 220 passengers, which was then a desired capacity from many airlines. However, this would result in a small fuselage mated to a comparatively large wing and oversized undercarriage, which would make the aircraft burn unnecessarily more fuel as it carries more weight.

Another problem was the rate of inflation, which in the UK, during 1979–1980, was 35%. This would significantly raise the development costs, and thus the cost of the final product.[4] During the A300's development, Hawker Siddeley Aviation was the subcontractor for the aircraft's wing, after the British government withdrew from the newly formed venture in 1969. HSA subsequently merged with three other companies in 1977 to form British Aerospace (BAe), and by then, the British government had indicated its intentions to rejoin the programme. However, British Airways (BA) and Rolls-Royce did not relinquish their will to collaborate with the Americans, and, in BA's case, buy US aircraft. BA wanted to buy 7N7 and 7X7, which would develop into the Boeing 757 and Boeing 767, with the latter an intended rival to the upcoming A310, as well as the Boeing 747. The French government started talks in May 1976, saying that an order from BA was a condition for re-admission of the UK into Airbus Industrie as a full partner. As this went on, BAe held talks with Boeing and McDonnell Douglas to see if it (BAe) could participate in future programmes, although the company's chairman, Lord Beswick, publicly stated that the aim was really to collaborate in Europe.[5] At the 1978 Farnborough Air Show, Eric Varley, the British Secretary of State for Industry, announced that BAe wished to rejoin the Airbus Industrie as a full partner from 1 January 1979. This would mean BAe would be allocated 20% shareholding and would play "a full part in the development and manufacturing of the A310".[6] 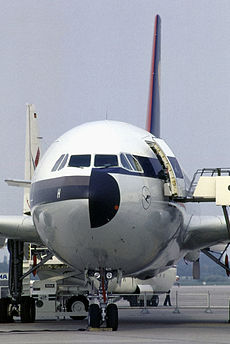 The prototype Airbus A310-200 at Düsseldorf Airport in 1982, featuring the liveries of Swissair (left) and Lufthansa (right), the first two airlines which had placed orders.[6]

From late 1977, before the Varley announcement BAe started work on the new wing at Hatfield. Simultaneously, Aérospatiale, MBB (Messerschmitt-Bölkow-Blohm) and VFW-Fokker held their individual studies into the new wing.[citation needed]

At the April 1978 Hanover Air Show, Airbus exhibited a model A310. Its wing area, at 219.25 m2 (2,360.0 sq ft) was slightly larger than that studied, at 209 square metres (2,250 sq ft); its passenger cabin was 12 frames shorter than the A300,Note 2 accommodating typical passenger loads of 195 in two-class, or 245 in economy.[6] However, during the next 12 months, almost every aspect was further refined. On 9 June 1978, Swissair and Lufthansa developed a joint specification for the aircraft, and within a month, announced that they would place the launch orders. On 15 March, Swissair became the first airline to place a firm order for the type, announcing that it would acquire 10 with a further 10 under option to replace its McDonnell Douglas DC-9s on its major intra-European routes. Lufthansa quickly placed a $240 million 10-aircraft order. Air France and Iberia shortly followed.[6]

The range of the A310 exceeds that of the A300 series with the exception of the A300-600R, which surpasses that of the A310-200. The A310's greater range has led to the aircraft being used extensively on transatlantic routes. The A300 and A310 introduced the concept of commonality: A300-600 and A310 pilots can cross-qualify for the other aircraft with one day of training.[citation needed]

Sales of the A310 continued and by the time the prototype A310-200 aircraft made its first flight on 3 April 1982, orders and options for 181 aircraft had been placed by 15 airlines worldwide, a somewhat better start than that of the original A300. It was clear that the longer-range series −200 aircraft was the more popular aircraft and Airbus decided in 1979 to stop offering the low gross weight series A310-100 (originally proposed for Lufthansa), none of which were built.[7]

Demand for the aircraft began to slacken and there were no new A310 passenger orders during the late 1990s, due to the introduction of the advanced technology Airbus A330; the last A310 delivery was in June 1998. The A310 (along with the A300) officially ceased production in July 2007, though an order from Iraqi Airways for five A310s remained on the books until July 2008. The remaining freighter sales were to be fulfilled by the new A330-200F derivative.[10]

The A310 was marketed as an introduction to widebody operations for developing airlines. The A310 was replaced in Airbus' lineup by the highly successful A330-200, which shares its fuselage cross-section. Between 1983 and the last aircraft produced in 1998, 255 A310s were delivered.[2]

The A300 and A310 established Airbus as a competitor to Boeing and allowed it to go ahead with the more ambitious A320 and A330/A340 families.[citation needed]

As of July 2015, 62 A310s remained in commercial service. Major operators were Fedex Express with 20 aircraft; Air Transat (9); Mahan Air (8); Pakistan International Airlines (5); and SATA International with 3 aircraft. Another 11 airlines operate 17 aircraft between them.[11] 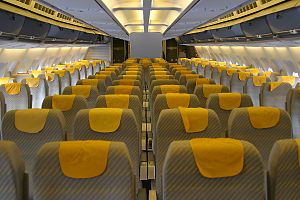 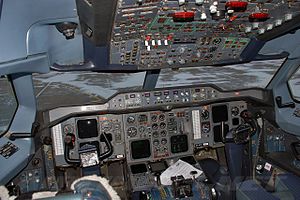 The A310 was a development of the A300; the aircraft was initially designated the A300B10. Essentially a shortened A300, the main differences in the two aircraft are:

The aircraft has a two crew "glass" cockpit as standard using CRT displays in place of the more traditional instrumentation, and modern electronic systems. The A310 flight deck was incorporated into the A300-600 enabling a dual type rating to be achieved. The flight deck has provisions for third and fourth crew seats. 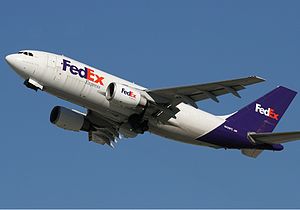 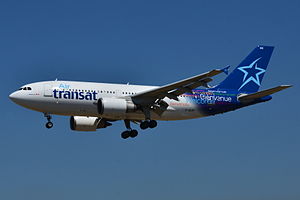 A310-200
The first A310, the 162nd Airbus off the production line, made its maiden flight on 3 April 1982 powered by the earlier Pratt & Whitney JT9D-7R4D1 engines. The −200 entered service with Swissair and Lufthansa a year later. Late series −200 also featured wing fences identical to those of the −300. The first three A310s were initially fitted with outboard ailerons; they were later removed once testing showed them to be unnecessary.[13]

A310-200C
A convertible version, the seats can be removed and cargo placed on the main deck.

A310-200F / -300F
The freight version available as a new build or as a conversion of the existing wide-bodied aircraft. The A310-200F freighter can carry 39t of freight for 5,950 km.[14] No production freighters of the A310 were produced. Operators such as FedEx Express acquired modified ex-passenger A310s, usually starting with the −300 version.

A310-300
First flown on 8 July 1985, the −300 is dimensionally identical to the −200, although it provides an increased Maximum Take-Off Weight (MTOW) and an increase in range, provided by additional centre and horizontal stabilizer (trim-tank) fuel tanks. This model also introduced wingtip fences to improve aerodynamic efficiency, a feature that has since been retrofitted to some −200s. The aircraft entered service in 1986 with Swissair. The aircraft incorporates a computerised fuel distribution system which allows it to be trimmed in flight resulting in less drag and therefore reduced fuel burn.

A310-300C
A convertible passenger/cargo version, the seats can be removed and cargo placed on the main deck.

The A310 has been operated by many of the world's air forces as a pure transport (A310-300 MRT), however several have now been converted to the "Multi Role Tanker Transport" configuration by EADS, providing an aerial refueling capability. At least six have been ordered; four by the German Air Force and two by the Canadian Forces. Deliveries began in 2004. Three were converted at EADS EFW in Dresden, Germany; the other three at Lufthansa Technik in Hamburg, Germany. The Chilean Air Force purchased two second-hand A310s to replace its aging 707–320 'Aguila' tanker transports. The first was received in October 2007. 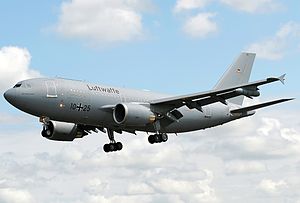 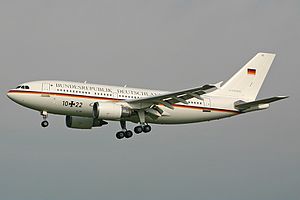 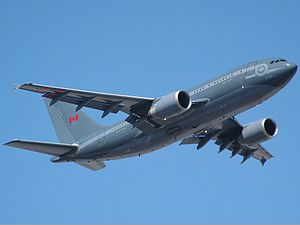 The A310 has been used by the armed forces of the following countries:

By the end of production a total of 255 A310s had been ordered and delivered.[2] 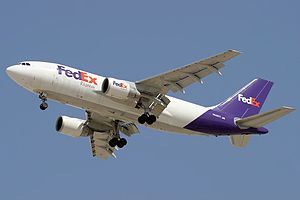 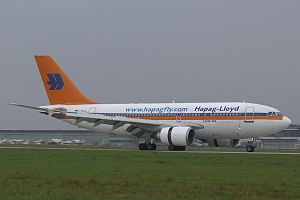 Hapagfly A310-304 landing at Stuttgart Airport, note deployed thrust reversers on the engines

Media related to Airbus A310 at Wikimedia Commons