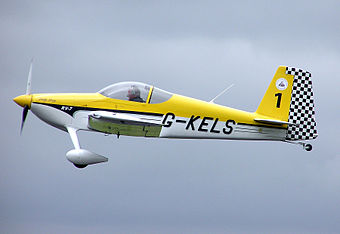 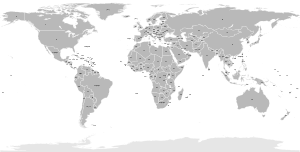 In accordance with the Convention on International Civil Aviation (also known as the Chicago Convention), all civil aircraft must be registered with a national aviation authority (NAA) using procedures set by each country. Every country, even those not party to the Chicago Convention, has a NAA whose functions include the registration of civil aircraft. An aircraft can only be registered once, in the one jurisdiction. The NAA allocates a unique alphanumeric string to identify the aircraft, which also indicates the nationality (i.e., country of registration[1]) of the aircraft, and provides a legal document called a Certificate of Registration, one of the documents which must be carried when the aircraft is in operation.[2]

Although each aircraft registration identifier is unique, some countries allow it to be re-used when the aircraft has been sold, destroyed or retired. For example, N3794N is assigned to a Mooney M20F.[5] It had been previously assigned to a Beechcraft Bonanza (specifically, the aircraft in which Buddy Holly was killed). Also note that an individual aircraft may be assigned different registrations during its existence. This can be because the aircraft changes ownership, jurisdiction of registration, or in some cases for vanity reasons. 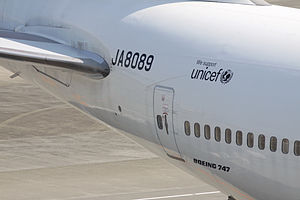 The first use of aircraft registrations was based on the radio callsigns allocated at the London International Radiotelegraphic Conference in 1913. The format was a single letter prefix followed by four other letters (like A-BCDE).[6] The major nations operating aircraft were allocated a single letter prefix but minor countries had to share a single letter prefix but were allocated exclusive use of the first letter of the suffix.[6] This was modified by agreement by the International Bureau at Berne and published on April 23, 1913. Although initial allocations were not specifically for aircraft but for any radio user, the International Air Navigation Convention held in Paris in 1919 (Paris Convention of 1919) made allocations specifically for aircraft registrations, based on the 1913 callsign list. The agreement stipulated that the nationality marks were to be followed by a hyphen then a group of four letters that must include a vowel (and for the convention Y was considered to be a vowel). This system operated until the adoption of the revised system in 1928.

The International Radiotelegraph Convention at Washington in 1927 revised the list of markings. These were adopted from 1928 and are the basis of the currently used registrations. The markings have been amended and added to over the years, and the allocations and standards have since 1947 been managed by the International Civil Aviation Organization (ICAO).

Article 20 of the Convention on International Civil Aviation (Chicago Convention), signed in 1944, requires that all aircraft engaged in international air navigation bears its appropriate nationality and registration marks. Upon registration, the aircraft receives its unique "registration", which must be displayed prominently on the aircraft. 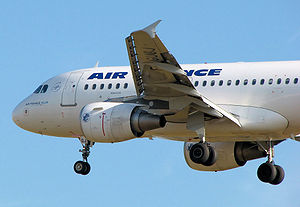 Air France Airbus A318 displaying registration F-GUGJ on the wing undersurface and the last two letters of the registration, GJ, on the nose wheel doors. 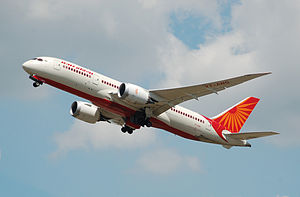 A Boeing 787-8 Dreamliner displaying Air India registration VT-ANG on the wing undersurface, on the nose wheel doors and on the rear fuselage.

When painted on the fuselage, the prefix and suffix are usually separated by a dash (for example, YR-BMA). When entered in a flight plan, the dash is omitted (for example, YRBMA). In some countries that use a number suffix rather than letters, like the United States (N), South Korea (HL), and Japan (JA), the prefix and suffix are connected without a dash. Aircraft flying privately usually use their registration as their radio callsign, but many aircraft flying in commercial operations (especially charter, cargo, and airlines) use the ICAO airline designator or a company callsign. In some instances, it may be sufficient to simply display the suffix letters, with the country prefix omitted. For example, gliders registered in Australia would omit the VH prefix and simply display the suffix. Obviously, this is only suitable where the aircraft does not fly in the airspace of another country.

Even if the suffix usually consists of alphabetical characters in a certain country, gliders and ultralights may sometimes use digits instead. For example, in Germany, D-ABCD will be a powered airplane while D-1234 is a glider. In Australia, early glider registration suffixes began with the letters "G-AU", and it is not uncommon to find such gliders only displaying the last two letters of the suffix, as they lacked the range to travel internationally. For example, VH-GIQ would simply be displayed as IQ.

Different countries have different registration prefixes: Canadian registrations start with C, British with G, German with D, and so forth. A comprehensive list is tabulated below.

In the United States, the registration number is commonly referred to as an "N" number, because all aircraft registered there have a number starting with the letter N. An alphanumeric system is used because of the large numbers of aircraft registered in the United States. An N-number may only consist of one to five characters, must start with a digit other than zero, and cannot end in a run of more than two letters. In addition, N-numbers may not contain the letters I or O, due to their similarities with the numerals 1 and 0.[7]

Each alphabetic character in the suffix can have one of 24 discrete values, while each numeric digit can be one of 10, except the first, which can take on only nine values. This yields a total of 915,399 possible registration numbers in the namespace, though certain combinations are reserved either for government use or for other special purposes.[7] With so many possible calls, radio shortcuts are used. Normally when flying entirely within the United States, an aircraft would not identify itself starting with "N", since that is assumed. Also, after initial contact is made with an aircraft control site, only the last two or three characters are typically used.

The following are the combinations that could be used: 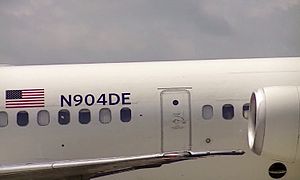 An older aircraft (registered before 31 December 1948) may have a second letter in its identifier, identifying the category of aircraft. This additional letter is not actually part of the aircraft identification (e.g. NC12345 is the same registration as N12345). Aircraft category letters have not been included on any registration numbers issued since 1 January 1949, but they still appear on antique aircraft for authenticity purposes. The categories were:

For example, N-X-211, the Ryan NYP aircraft flown by Charles Lindbergh as the Spirit of St. Louis, was registered in the experimental category.

There is a unique overlap in the United States with aircraft having a single number followed by two letters and radio call signs issued by the Federal Communications Commission to Amateur Radio operators holding the Amateur Extra class license. For example, N4YZ is, on the one hand, a Cessna 206 registered to a private individual in California, while N4YZ is also issued to an Amateur Radio operator in North Carolina.

The impact of decolonisation and independence on aircraft registration schemes has varied from place to place. Most countries, upon independence, have had a new allocation granted, taken from either an existing ITU allocation or the former country's ITU allocation. For example, after partition in 1947, India retained the VT designation used by the British Raj, while Pakistan adopted the AP designation from the newly allocated ITU callsigns APA-ASZ. Hong Kong, which formerly used the VR-H designation, had the "VR" replaced with the Chinese "B" upon the 1997 Handover to China, resulting in aircraft designations with only four letters in total (as opposed to the international norm of five letters).

Registration prefixes and patterns by countries