Airport policing in the United Kingdom

Airport policing in the United Kingdom has taken many forms since the rise of scheduled airline services in the post-war period. Policing at major civilian airports was the responsibility of specialist constabularies operated by three central government departments until 1974, when the rise in international terrorism saw armed police from territorial police forces deployed to major airports under the provisions of the Policing of Airports Act. As more minor airports grew in size, they too switched to armed police provided by local police forces. However, the funding agreements for the provision of such services varied wildly from airport to airport, leading to disagreements between airport operators and Chief Constables. A new regime, the Airport Security Planning Framework, came into force in January 2010, and brought airport operators, airlines and police forces together to develop joint security and policing plans for all passenger airports.

Civilian airports in the United Kingdom were originally under the control of the Air Ministry, which was mainly concerned with the operation of the Royal Air Force, but was also responsible for non-military aviation. During this time, airfields and aerodromes were policed by the Air Ministry Constabulary, who were sworn in as special constables under section 3 of the Special Constables Act 1923.[1] In 1946, F. J. May OBE was appointed as the first Chief Constable, and Squadron Leader D. F. Grierson MBE was appointed as Deputy Chief Constable.[2] 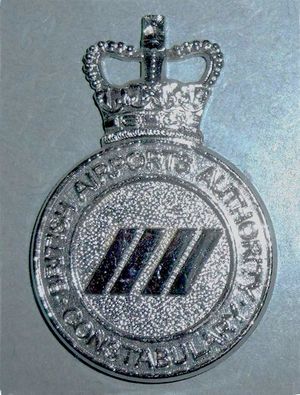 A cap badge of the British Airports Authority Constabulary.

The British Airports Authority was established in 1965 by the Airport Authority Act 1965, and on 1 April 1966 the new British Airports Authority Constabulary (BAAC) took on responsibility for operating London Heathrow, London Gatwick and London Stansted airport.[6][7] The change of administration was seen as an opportunity to partially reform old working methods, and then-novel innovations were introduced, such as report forms with tick-boxes, an index card system and dictation machines for detectives.[6] In December of that year, the strength of the force stood at 201.[6] In 1969 the Chief Constable, Major W. Ronnie, was awarded the Queen's Police Medal.[8] BAA took on Edinburgh Airport in 1971, and Aberdeen Airport and Glasgow International Airport in 1975.[9] By mid-1970, the strength of the BAAC stood at 326, of which 28 were women.[6]

BAAC constables were sworn in under section 10 of the Airport Authority Act 1965.[10] They were attested before a Justice of the Peace (or a sheriff in Scotland), and had "the powers and privileges and [were] liable to the duties and responsibilities of a constable" on all the aerodromes owned or managed by BAA.[10] They also enjoyed their powers when following (pursuing) a person from such an aerodrome, if they could have arrested them on the aerodrome.[10] BAA had the power to sack or suspend constables, and were vicariously liable for their actions.[10] In April 1971, RM Carson was appointed as Chief Constable of the BAAC.[11]

Members of all the police forces had full police powers whilst on the airport (in the case of Birmingham Airport Police, their powers extended when in pursuit of a person from the airport as with BAAC).[15]

Liverpool Airport Police were effectively disbanded in 1974, when political change at the City Council saw Liverpool Parks Police merged with the airport police into a civilian "Liverpool City Security Force".[12]

Designation under the Policing of Airports Act

In 1974, a terrorist alert at Heathrow airport caused the army to be deployed in an immediate response. Although the exact circumstances of their deployment are still unclear, the effect was that the armed officers from the Metropolitan Police were, for the first time, permanently deployed to Heathrow airport.[19] The BAA, being a public corporation (but not under the direct control of the government), could not arm its officers, and nor could the municipally-controlled police forces at Birmingham or Manchester.

As a response, the government introduced the Policing of Airports Act 1974, which gave them the power to "designate" airports for the purposes of policing. Designation of a particular airport caused policing at that airport to become the responsibility of the local territorial police force for the airport (who could deploy armed officers), and the airport operator reimbursed the police force accordingly.

The designated airports were those owned by BAA at the time (Heathrow,[D 1] Stansted,[D 2] Gatwick,[D 3] Aberdeen,[D 4] Edinburgh,[D 5] Glasgow (International)[D 6] and (Glasgow) Prestwick[D 7]) and Birmingham[D 8] and Manchester[D 9] airports, then under the control of their respective local authorities. Consequently, the BAAC[D 10] and the Glasgow,[D 11] Birmingham[D 12] and Manchester [D 13] airport police forces were disbanded on 1st Nov 1974 and its members absorbed within the ranks of the respective territorial police forces.

Although the designation system allowed territorial police forces to recover the additional costs of providing extra police officers for airports in their police area, it had some limitations. There was no effective means of arbitration between an airport operator and the police force - the Secretary of State for Transport could "determine" what the payment would be, but could not adjudicate on what level of service should be provided. At Luton Airport, which was not designated, Bedfordshire Police provided armed police under their statutory duty to provide "effective and efficient policing", but the airport operator refused to pay for the service.[20]

2006 Independent Review of Policing at Airports

In 2006, Stephen Boys Smith was tasked by the Department for Transport and the Home Office to carry out a review of airport policing. His report recommended that partnership working be enhanced and that the system of "designations" be discontinued.[21] The Policing and Crime Act 2009 introduced a new statutory framework, the Airport Security Planning Framework, which applies to airports designated by direction of the Department of Transport Transport Security and Contingencies Directorate (see below). Under this framework, two groups are established at each airport: a Risk Advisory Group and a Security Executive Group. The Risk Advisory Group assess the security risks to the airport and issues Risk Reports. The Risk Reports feed into the Security Executive Group, who draw up an Aerodrome Security Plan (ASP). The ASP covers the measures in place at the airport, who is responsible for the measures and how those measures will be monitored.[21][22]

If the ASP includes the provision of police services, then a Police Services Agreement (PSA) is also made. A PSA includes the level of policing that will be provided, how it will be paid for, and what facilities will be provided by the airport operator to the police force. PSAs do not cover responses to emergencies (both day-to-day emergencies and those covered by the Civil Contingencies Act 2004), extra police provision for hijack designated airports, border control work or protection against man-portable air-defense systems. The new Framework also includes expanded powers of dispute resolution for the Secretary of State for Transport, and provides for recourse to judicial review by the High Court.[21][22]

The following airports are covered by the Single Consolidated Direction 2010, and are subject to the Airport Security Planning Framework as outlined above.[23]

The designation orders, and the Acts listed below marked *, are only publicly available at the Parliamentary Archives.