From Infogalactic: the planetary knowledge core
Jump to: navigation, search
This article is about the French department. For other uses, see Aisne (disambiguation).

Aisne (French pronunciation: ​[ɛːn]) is a French department in the Nord-Pas-de-Calais-Picardie region of northern France. It is named after the river Aisne.

The landscape is dominated by masses of rock which often have steep flanks. These rocks appear all over the region, but the most impressive examples are at Laon and the Chemin des Dames ridge.

The principal cities in Aisne are :

See also: List of the communes of the Aisne department and Brie.

The Scheldt (which takes its source near Le Catelet), the Aisne, the Marne, the Ourcq, the Vesle, the Somme (which rises in Fonsommes), the Oise, and the Serre. In the south of the department, there is the Surmelin, the Verdonnelle, and the Dhuys (this river is channeled into the Dhuis Aqueduct, 131 km long, to supply drinking water to Paris since 1 October 1865 and also more recently the Leisure Park of Marne-la-Vallée).

The department is also crossed by numerous canals (e.g. the Canal of Saint-Quentin, 93 km).

There is an average of 500 to 750 mm precipitation annually.

Aisne is one of the original 83 departments created during the French Revolution on 4 March 1790. It was created from parts of the former provinces of Île-de-France (Laon, Soissons, Noyon,and Valois), Picardy (Thiérache Vermandois), and Champagne (Brie,and Omois).

Most of the old growth forests in the area were destroyed during battles in World War I. The French offensive against the Chemin des Dames in spring 1917 is sometimes referred to as the Second Battle of the Aisne.

Agriculture dominates the economy, especially cereal crops. Beet sugar is one of the most important industrial crops of the area. Silk, cotton, and wool weaving flourish in Saint-Quentin and other towns. Saint-Gobain is known for its production of mirrors, which started in the 17th century. Guise is the agricultural centre of the northern area of Aisne.

The department is a mixture of rural areas and working-class towns. As a place of residence for some families working in Paris or Île-de-France, Aisne was for many years a department rather oriented to the left, with a majority on the General Council on the left since 1998, and the same for the majority of parliamentary seats representing the department in the National Assembly.

The smaller cities of the northern department such as Guise, Hirson, Vervins and the railway city of Tergnier are sources of support for left-wing parties.

The President of the General Council is the Socialist Yves Daudigny.

Aisne is divided into five arrondissements and 21 cantons. The department has 816 communes and five parliamentary constituencies. 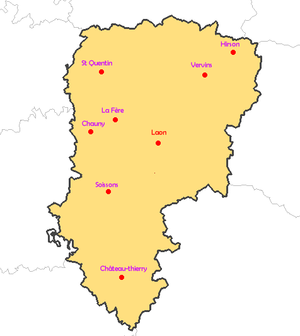 The main cities of the department

The department of Aisne includes one medium-sized city (Saint-Quentin) and three small cities (Laon, Soissons and Château-Thierry) to which may be added the conglomeration formed by Chauny and Tergnier. There are many other agglomerations of an urban character because Aisne has been densely populated since before the 19th century. The villages are numerous and rather small.

Aisne lost some of its population in the second half of the 19th century, due to the rural exodus but this was limited by the industrial development in the north of the department (Saint-Quentin, Chaunois, Thiérache).

Greatly affected by the First World War, the department has seen its population grow slightly to the same level as in 1900. For thirty years, the industrial decline has caused stagnation of the population (526,346 in 1968, 535,489 in 1999). Only the south-west of the department, close to the Paris conurbation, has seen much population growth. 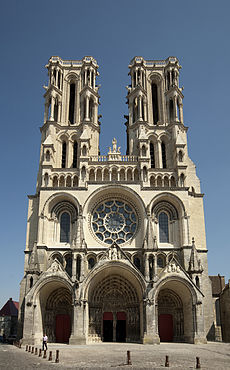 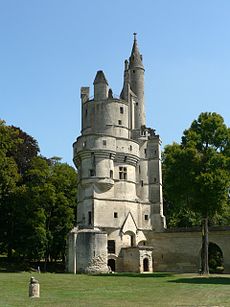 The keep of the castle of Septmonts 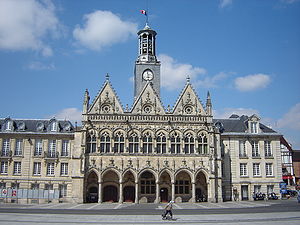 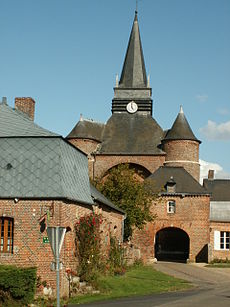 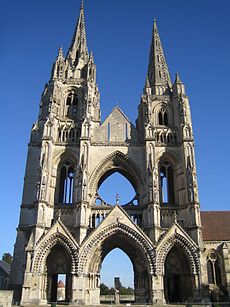 Ruins of the Abbey of St. Jean des Vignes in Soissons

The boat tours relates in part to the Canal de Saint-Quentin with its electric towage and two tunnels (Lesdins and Riqueval/Vendhuile).

In 2007, a large infrastructure for tourist accommodation, the Center Parcs, was built on the Lake of Ailette, close to many tourist attractions such as the Cathedral of Laon, the Chemin des Dames and the Château de Coucy.

Among the many places to explore are:

During World War I a number of significant architectural monuments were destroyed. Of the buildings that survived, the medieval churches in Laon, Braine, and Urcel are the most significant. The ruined castle of La Ferté-Milon escaped further damage during the war. Of the castles that survived, some were used as prisons, such as the Castle of Vadancourt, near Saint-Quentin (500 prisoners).[4]

It is thought that the Aisne River was the birthplace of the trench warfare seen in the First World War. The British Expeditionary Force (BEF) had initial early successes driving the Germans back to the Aisne River; the German troops dug in and managed to hold out against both British and French attacks. This German entrenchment was to mould the entire face of World War One as both sides began digging in and fortifying their positions. Thus began the stalemate that became a significant feature of the First World War.

This linguistic variance probably explains the difficulty for residents south of Aisne to identify themselves as belonging to the Picardy region.

Notable people linked to the department

In 2008, the department had 4.1% of second homes. This table shows the main communes of Aisne that have second homes which occasionally exceed 10% of total housing.