From Infogalactic: the planetary knowledge core
Jump to: navigation, search
This article is about Santorini's prehistoric city. For the city of classical antiquity, see Ancient Thera. For the modern nearby village, see Akrotiri, Santorini. For other uses, see Akrotiri (disambiguation).

Akrotiri (Greek: Ακρωτήρι, pronounced Greek: [akroˈtiri]) is a Minoan Bronze Age settlement on the volcanic Greek island of Santorini (Thera). The settlement was destroyed in the Theran eruption about 1627 BC and buried in volcanic ash, which preserved the remains of fine Frescoes and many objects and artworks. The settlement has been suggested as a possible inspiration for Plato's story of Atlantis. The site has been excavated since 1967.

The earliest evidence for human habitation of Akrotiri can be traced back as early as the fifth millennium BC, when it was a small fishing and farming village. By the end of the third millennium, this community developed and expanded significantly. One factor for Akrotiri’s growth may be the trade relations it established with other cultures in the Aegean, as evidenced in fragments of foreign pottery at the site. Akrotiri’s strategic position on the primary sailing route between Cyprus and Minoan Crete[1] also made it an important point for the copper trade, thus allowing them to become an important center for processing copper, as proven by the discovery of molds and crucibles there.

Akrotiri’s prosperity continued for about another 500 years; paved streets, an extensive drainage system, the production of high quality pottery, and further craft specialization all point to the level of sophistication achieved by the settlement. This all came to an end, however, in the late 17th century BC with the volcanic eruption of Thera.

The Akrotiri excavation site is of a Minoan Bronze Age settlement on the Greek island of Santorini, associated with the Minoan civilization due to inscriptions in Linear A, and close similarities in artifact and fresco styles.[2] The excavation is named for a modern village situated on a hill nearby. The name of the site in antiquity is unknown. 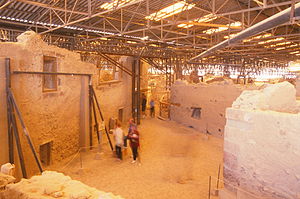 A view down onto Triangle Square in front of the West House in Akrotiri, Greece. Taken in 2001, 4 years before the roof collapsed. 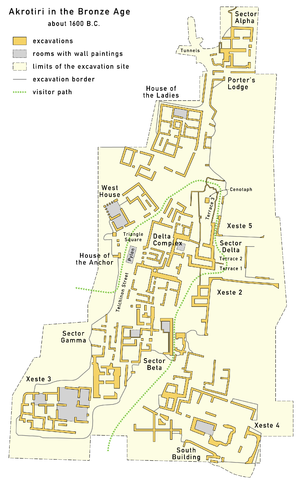 Layout map of Akrotiri in the Bronze Age.

Akrotiri was buried by the massive Theran eruption in the middle of the second millennium BC[3] (during the Late Minoan IA period); as a result, like the Roman ruins of Pompeii after it, it is remarkably well-preserved. Frescoes,[4] pottery, furniture, advanced drainage systems and three-story buildings have been discovered at the site.[5]

The earliest excavations on Santorini were conducted by French geologist F. Fouque in 1867, after some local people found old artifacts at a quarry. Later, in 1895-1900, the digs by German archeologist Baron Friedrich Hiller von Gaertringen revealed the ruins of ancient Thera on Mesa Vouno.[6] Also, a little later, R. Zahn excavated in the locality of Potamos, near Akrotiri, under the auspices of the German Archaeological Institute at Athens.

Extensive modern excavation was started in 1967 by Spyridon Marinatos, and revealed the full value of this site. Spyridon Marinatos choice of site proved to be correct, and just a few hours into the excavation, the remains of the buried city began to be discovered.[7] The next step was to determine the extent of the city, to which it took two whole seasons devoted to the site in 1967 and 1968. In the early years of the excavation, a great deal of attention was paid towards the organization of proper facilities for the dig, including substantial workshops, laboratories built for storage, repair and treatment, and areas for examination of archaeological finds.[7] Because of the site being preserved in thick, volcanic debris, Marinatos noted that many of the buildings were preserved to a height of more than a single story, creating unique challenges for excavation. He experimented with tunneling into the pumice, but this technique was later abandoned.

Some historians hold that this settlement, as well as the disaster that left it unknown to most of history, as the inspiration behind Plato's story of Atlantis, as mentioned in his dialogues Timaeus and Critias. Excavated artifacts have been installed in a museum distant from the site (Museum of Prehistoric Thera), with many objects and artworks presented. Only a single gold object has been found, hidden beneath flooring, and no uninterred human skeletal remains have been found. This indicates that an orderly evacuation was performed with little or no loss of life.

An ambitious modern roof structure, meant to protect the site, collapsed just prior to its completion in 2005, killing one visitor.[8][9] No damage was caused to the antiquities.[10] As a result, the site was closed to visitors until April 2012.[11][9]

Fresco ship procession or flotilla. Frieze from the West House 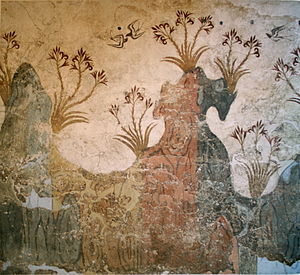 All of the pigments used by the artists at Akrotiri for painting the frescoes look as though they are all mineral based, and thus have resulted in the great preservation of the pieces. The colors used in Theran painting includes white, yellow, red, brown, blue, and black. The technique used is not true fresco except for a few isolated instances, and instead appears as though the painting was began while the plaster was still wet, but as though the artist made no effort in keeping it wet, and seemed content to complete the work on a dry surface. As a result, often on the same fresco, the paint has penetrated the plaster in some area but flake off easily in others.[7]

Specialized techniques were required when it was discovered early on in the excavation process that the site contained numerous well preserved fresco wall paintings. Tassos Margaritoff, one of the leading restorers of Byzantine frescoes, is currently the supervisor of the Akrotiri project.[7] The first fragments of fresco were discovered in 1968 in Sector Alpha, and depict the head of an African, the head of a blue monkey and some large flying blue birds. Though their fragmentation condition is perhaps, at first, off putting, these frescoes revealed that a great art had flourished at Akrotiri. 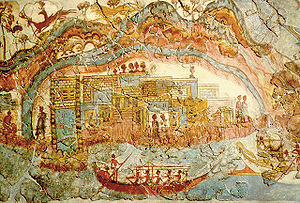 In 1969, the fresco of the Blue Monkeys in Room Beta 6 was discovered, and created increased excitement at the site.[7] The rocky landscape which the monkeys are depicted climbing upon mimics the similar volcanic rocks near the site presently.

In 1970, the Spring Fresco was uncovered in Room Delta 2, and is the first fresco to have been found perfectly preserved and still standing in its original, installed position.[7] The supporting wall of the fresco was not in the best condition and thus, the fresco had to be removed immediately in order to preserve it. Rescuing the fresco was a delicate procedure and allowed the archaeologists and restorers to develop invaluable experience.

A few other frescoes including The Fisherman, and Lady from the House of Ladies have been found standing, though detached from the wall.

Gallery of museum objects on Santorini

Most of the images here have been color corrected by the Picture Workshop of the German Wikipedia. The yellow light (without the energetic blue wavelengths) used in the museum greatly reduces the fading of colors. Differences in technical approach and guesses at appropriate coloration have led to variations in color rendering.

The excavations at Akrotiri have produced a large variety of artifacts revealing numerous varieties of Late Cycladic pottery from the area. Being the most common and most enduring commodity in the culture of majority of ancient societies, and thus, is of great importance to archaeologists in interpreting Ancient Greek societies. At Akrotiri, pottery is particularly abundant because of the circumstances surrounding the demise of the town in that its sudden evacuation means that inhabitants were only able to take their most valuable possessions with them.[7]

Serving a multitude of purposes, pottery can tell a great deal about the society in which they were produced. Large jars were used as containers for storage of goods, while others like stirrup jars were designed for the transportation of certain commodities. As well, there were also vessels for preparing and cooking food, for eating and drinking and many other diverse activities including bath-tubs, braziers, oil lamps, bee-hives, flower pots, etc. Most evidently, the shape, size, and perhaps even the decoration of the vases were closely related to their use in the Ancient world.[7]

In regards to furniture, the volcanic ash which engulfed the city often penetrated into the houses in large quantities, and in these layers of fine volcanic dust, produced negatives of the disintegrated wooden objects. Using these negatives as molds, liquid Plaster-of-Paris can be poured in and produce casts of parts or even entire pieces of furniture such as beds, tables, chairs, or stools. Offering tables are one of the most common finds in Akrotiri, and were either made of clay or coated with plaster, decorated in the same technique as the wall paintings, and only consisted of three highly decorated legs and a top.[7]

Connecting the old excavation site to the town of Akrotiri, there is a path descending from the first houses of the small city to the parking lot of the excavations of Akrotiri. The path has been both signaled and reopened (on September 2012) now regularly undergoing maintenance thanks to international volunteers responding to Citizens in Action call. The local population has been the first supporter of this initiative and in charge of the keeping of the path as been involved working along with the volunteers. The path is suitable for mountain biking, hiking, and many other activities. If a right deviation is taken along the walking of the path you might reach the Red Beach area.