Salamiyah (Arabic: سلمية‎‎ Salamīya) is a city and district in western Syria, in the Hama Governorate. It is located 33 km southeast of Hama, 45 km northeast of Homs. The city is nicknamed the "mother of Cairo" because it was the birthplace of the second Fatimid Caliph Muhammad al-Qaim Bi-Amrillah, whose dynasty would eventually establish the city of Cairo, and the early headquarters of his father Ubayd Allah al-Mahdi Billah who founded the Fatimid Caliphate. The city is an important center of the Shiite Nizari Ismaili sect and also the birthplace of poet Muhammad al-Maghut. The population of the city is 66,724 (2004 census).[1]

Salamiyah is an ancient city which was first known during Babylonian times in 3500 BC. It was the dwelled in by Sumerians at around 3000 BC, the Amorites around 2400 BC, the Aramaeans around 1500 BC, and the Nabateans around 500 BC. The city was destroyed for the first time by the Assyrians in the year 720 BC. After being rebuilt, the city was part of the Roman Empire and ruled by the Royal family of Emesa, a Roman Client Kingdom of Ancient Rome where they built the famous Chmemis Castle on the remains of a former volcano, 5 km northwest of Salamiyah.

During the Byzantine Empire, Salamiyah existed as a Christian center with its own autocephalic Archbishop, until the city was destroyed for a second time during the Persian invasion of Syria of 637 during the Byzantine-Sassanid Wars by commander Kisra Ibrawiz who raised the city to the ground. The city was rebuilt again in the Islamic era by Abdullah ibn Saleh ibn Ali al-Abassi, the Abbasid governor of southern and center Syria, in 754 and was settled by some Hashimites during the Abbasid era, and al-Abbasi's son Muhammad ibn Abdullah ibn Saleh transformed the city into an important commercial center.[2]

According to Isma'ili Muslims, their Imam, Isma'il ibn Jafar died and was buried in the city after going into hiding during the eighth century. The city became the secret headquarters of the Isma'ili movement from the early ninth century until 902, it was from there that missionaries were originally sent for propagating the Isma'ili teachings in different regions. It was from Salamiyah, that the Isma'ili Imams secretly guided the activities of their followers from North Africa to Persia, Azerbaijan, and Central Asia. According to conflicting histories, the Isma'ili Imam, and first Fatimid Caliph, Ubayd Allah al-Mahdi Billah was either born in Salamiyah or came to the city in 882 from Khuzistan, in modern day Iran where he was raised by his uncle Abul Shalaghlagh the Hujjah (also called Lahiq) or leader of the Isma'ilis of Salamiyah, one of the twelve Isma'ili communities at the time. Ubayd Allah's son Muhammad al-Qa'im Bi-Amrillah, an Ismaili Imam and the second Fatimid Caliph, was born in Salamiyah in the late ninth century, and both left the city to establish the Fatimid state in northern Africa in the early tenth century.

After the death of Abul Shalaghlagh in 899, a dispute arose between Salamiyah Isma'ilis due to the fact that he left no male descendants and apparently had designated his nephew Ubayd Allah as his spiritual successor and leader of the Salamiyah Isma'ili movement. Thereafter, a schism split the movement, provoked by Ubayd Allah's claims on the imamate for himself and his descendants. Hamdan Qarmat and 'Abdan, who may have previously drifted slightly away from the doctrine propagated by the leadership, broke off their support. Qarmat's followers would eventually be known as the Qarmatians, and after Ubayd Allah fled from Salamiyah to found the Fatimid Isma'ili state in North Africa in 899, the Qarmatis would reject the legitimacy of the Fatamids. In 903, Salamiyah was destroyed for the third time by an invasion from the rebel Qarmatians under Yahya ibn Zikrawayh.

Salamiyah is mentioned by historians as a very small town with limited rural settlement consequent to the Qarmatian invasion until the early Ottoman period wherein it was apparently deserted due to lack of protection from Bedouin attacks. Salamiyah was rebuilt when permission by the Ottoman Sultan Abdul Hamid II through a firman in July 1849 gave permission for the emigration of Isma'ilis led by Ismail bin Muhammad, the Isma'ili amir of Qadmus in northern Syria. Isma'ilis from Qadmus and Masyaf amongst other smaller towns and villages emigrated to the newly rebuilt city which was first occupied by only sixteen families and by 1861, Salamiyah became an agricultural village. The final major Isma'ili immigration to Salamiyah occurred in 1919.

Salamiyah is currently the largest population center of Isma'ili Muslims in the Arab world. The remains of Prince Aly Khan, the father of the current Nizari Isma'ili Imam Aga Khan IV, are buried in the city. The headquarters of the Isma'ili Shia Higher Council of Syria are in the city, as are dozens of Jama'at Khana. During the mid-twentieth century, Salamiyah saw a growth of religious diversity with the building of the first Sunni mosque, and now the city is home to almost a dozen Sunni mosques and a Ja'fari Shia mosque in the city's Qadmusite Quarter which is home to most of the city's Ithna Ashari Shia which migrated to the city after ethnic and religious clashes in their hometown of Qadmus in the early twentieth century. Currently, a little more than half of the city's residents are Ismaili.[3]

In 1934, Muhammad Maghut, the poet credit for being the father of free verse Arab poetry, was born in Salamiyah. In 1991, visitors from the Dawoodi Bohra sect of Ismaili Shia Islam in Yemen built the Mosque of Imam Ismail adjacent to the grave of the Ismaili Imam Ismail. The mosque was built by order of their leader the Da'i al-Mutlaq Mohammed Burhanuddin according to an inscription on the mosque's wall. Although currently used for worship by Sunni Muslims, the mosque and mausoleum are visited in religious pilgrimages by Dawoodi Bohra worldwide. 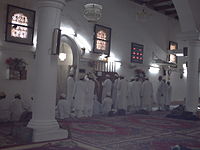 As per Ismaili.net[4] residence history of Salamia is as follows:

"The Ismaili dais in search of a new residence for their Imam came to Salamia and inspected the town and approached the owner, Muhammad bin Abdullah bin Saleh, who had transformed the town into a flourishing commercial centre. They told him that there was a Hashimite merchant from Basra who was desirous of settling in the town. He readily accepted and pointed out to them a site along the main street in the market, where existed a house belonging to a certain Abu Farha. The Ismaili dais bought it for their Imam and informed him about it. Wafi Ahmad arrived to his new residence as an ordinary merchant. He soon pulled down the old building and had new ones built in its place; and also built a new wall around it. He also built a tunnel inside his house, leading to the desert, whose length was about 12 miles. Money and treasures were carried on camels to the door of that tunnel at night. The door opened and the camels entered with their loads inside the house."

Photo placed here shows the mousoleum of the Imam. Near his kabra mubarak ("blessed grave"), the tunnel opening still exists.

The city is an agricultural center, with a largely agriculture based economy. Mate is extremely popular in Salamiyah and a drink of major cultural importance in social gatherings.