Al Arabiya (Arabic: العربية‎‎, transliterated: al-ʿArabiyyah or al-ʻArabīyah; the name means: "The Arabic One" or "The Arab One"[n 1]) is a Saudi-owned pan-Arab[6] television news channel broadcast in Modern Standard Arabic.

Launched on 3 March 2003,[7][8] The channel is based in Dubai Media City, United Arab Emirates, and is owned by Saudi broadcaster Middle East Broadcasting Center (MBC).

The former general manager of Al Arabiya is Abdulrahman Al Rashed.[9] He was replaced in the post by Adel Al Toraifi on 22 November 2014.[10]

A free-to-air channel, Al Arabiya carries news, current affairs, business and financial markets, sports, talk shows, and documentaries. It is rated by the BBC among the top pan-Arab stations by Middle East audiences.[11] The channel has been criticized for having a "pro-Saudi agenda",[12] and it was once banned in Iraq by the US-installed Governing Council for "incitement to murder" for broadcasting audio tapes of Saddam Hussein.[11]

Some[according to whom?] believe that Al Arabiya was created to be a direct competitor of the Qatar-based Al Jazeera.[11] As a response to Al Jazeera's criticism of the Saudi royal family throughout the 1990s, relatives of the Saudi royal family established Al Arabiya in Dubai in 2002.[14][15][16] According to a 2008 New York Times profile of Al Arabiya director Abdul Rahman Al Rashed, the channel works "to cure Arab television of its penchant for radical politics and violence", with Al Jazeera as its main target. Al Arabiya is said to be the second most frequently watched channel after Al Jazeera in Saudi Arabia.[17]

Al Arabiya broadcast the email messages of Syrian president Bashar Assad in 2012 that were leaked by opposition hackers.[18] The channel's English language website also obtained emails which revealed[19] that PR agency BLJ were behind the infamous positive profile of the Syrian first lady, Asma Assad, in Vogue magazine while her husband's regime was responsible for the crushing of peaceful demonstrations in 2011.[20] 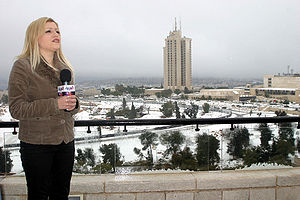 Special Mission is Al Arabiya's longest-running investigative journalism/current affairs television program. It broadcasts on the Al Arabiya Pan Arab Channel based in Dubai. Premiered on 19 October 2003 it is still running. The Special Mission Team Founding the program did much to set the ongoing tone of the program.

Based on the investigative Panorama concept, the program addresses a single issue in depth each week, showing either a locally produced program or a relevant documentary stories from many areas in the world. The program has won many awards for investigative journalism, and broken many high-profile stories. A notable early example of this was the show's exposé on the appalling living conditions endured by many children living in rural Africa, East Asia etc.

Special Mission is presented in a form of journalism in which reporters deeply investigate a single topic of interest, often involving crime, political corruption, or corporate wrongdoing. Special Mission is an investigative program that aims to uncover the truth about puzzling topics which are unclear to the public, by taking them step by step into the investigative process, and build the momentum accordingly. Issues like politics, economy, and even religion are addressed. The atmosphere of secrecy and caution builds the intensity of the program. Presented by Correspondents and Reporters.

According to unconfirmed reports, the original investment in Al Arabiya was $300 million by the Middle East Broadcasting Center (MBC), Lebanon's Hariri Group, and other investors from Saudi Arabia, Kuwait, and the Persian Gulf states.[11] Through MBC, Abdulaziz bin Fahd and his maternal uncle Waleed bin Ibrahim al Ibrahim own and have control over Al Arabiya.[17]

In March 2012, the channel launched a new channel, Al-Hadath which focuses exclusively on prolonged extensive coverage of political news.[23]

Al Arabiya was started in response to Qatar's pan-Arab satellite channel Al Jazeera, but has languished behind in audience popularity surveys, according to reports by University of Maryland professor Shibley Telhami.[24][25] Al Arabiya has been criticized for being an arm of Saudi foreign policy, or what the United States would term public diplomacy, as it is seen as being part of "a concerted Saudi attempt to dominate the world of cable and satellite television media in the Arab world and steal the thunder of Egypt".[26][27]

Over the past couple of years several journalists and editors have been dismissed because of their coverage; In 2011, Al Arabiya fired Hafez Al Mirazi for criticizing the channel's coverage of the Egyptian uprising[28] while in 2009 Courtney C. Radsch claimed to have lost her job the day after publishing an article about safety problems on the national Emirates airline.[29]

Al Arabiya had been banned from reporting from Iraq by the country's interim government in November 2004 after it broadcast an audio tape on November 16 purportedly made by the deposed Iraqi President Saddam Hussein.[11] The Iraqi government had also banned the channel on 7 September 2006 for one month for what it called "imprecise coverage". Al Arabiya journalists and staff have come under constant pressure from Iraqi officials to report stories as dictated to and in 2014, PM Nouri Maliki threatened again to ban Al Arabiya in Iraq, shut down its offices and websites. For his part, Al Arabiya’s General Manager at the time Abdulrahman al-Rashed vowed[30] in a statement that the news channel and its sister channel al-Hadath will continue reporting the story in Iraq despite Maliki’s threats as well as other threats from the likes of ISIS.

“Our two channels, Al Arabiya and Al Hadath have caused much embarrassment to Nouri al-Maliki after they aired a large number of videos and eyewitness accounts following the rapid collapse of his forces in Mosul and Tikrit over the past few days, prompting wide criticism against his government,” said al-Rashed in his statement.[31] On 14 February 2005, Al Arabiya was the first news satellite channel to air news of the assassination of Rafik Hariri,[32] one of its early investors. On 9 October 2008, the Al Arabiya website was hacked.[33]

On 2 September 2008, Iran expelled Al Arabiya's Tehran bureau chief Hassan Fahs, the third Al Arabiya correspondent expelled from Iran since the network opened an Iran office.[34] On 14 June 2009, the Iranian government ordered the Al Arabiya office in Tehran to be closed for a week for "unfair reporting" of the Iranian presidential election. Seven days later, amid the 2009 Iranian election protests, the network's office was "closed indefinitely" by the government.[35]

In a column published[citation needed] on Al Arabiya's English website,[citation needed] Hassan Fahs set the record straight in his own words[citation needed] as to why he has left Iran, revealing that he has received direct threats of arrest and killing from senior Iranian officials as well as alarming attempts to censor and control the channel's coverage.[36]

Despite some making accusations that Al Arabiya is tied to the Saudi government, some of the channel's harshest critics are in Saudi Arabia, mostly attacking the channel's critical coverage of religious hardliners and other social issues in the Kingdom. Al Arabiya is reported to be referred to as "Al Abriya" (proper transliteration: al-ʻibrīyah) by Saudi religious conservatives, which means "the Hebrew [one]" in Arabic.[17]

In September 2003, Al Arabiya reporter Mazen al-Tumeizi was killed on camera in Iraq when a U.S. helicopter fired on a crowd in Haifa Street in Baghdad.[37]

In February 2006, three Al Arabiya reporters were abducted and murdered while covering the aftermath of the bombing of a mosque in Samarra, Iraq. Among them was correspondent Atwar Bahjat, an Iraqi national. In 2012, Al Arabiya's Asia correspondent Bakir Atyani was abducted in the Philippines by an armed militia. He was released[38] after 18 months[39]

On 26 January 2009, President of the United States Barack Obama gave his first formal interview as president to Al Arabiya,[40] delivering the message to the Muslim world that "Americans are not your enemy", while also reiterating that "Israel is a strong ally of the United States" and that they "will not stop being a strong ally of the United States".[13] The White House contacted Al Arabiya's Washington Bureau chief, Hisham Melhem, directly just hours before the interview and asked him not to announce it until an official announcement was made by the administration.[40]

The Al Arabiya internet news service (alarabiya.net) was launched in 2004 initially in Arabic, and was joined by an English-language service in 2007, and Persian and Urdu services in 2008. The channel also operates a business website that covers financial news and market data from the Middle East in Arabic (alaswaq.net). The Al Arabiya News Channel is available live online on JumpTV and Livestation. The English website of Al Arabiya[citation needed] was relaunched in 2013 and now features automated subtitles of the news and programs that appear on the channel.[41]

The Al Arabiya website was plagued with numerous technical difficulties during the Egyptian protests at the end of January 2011. The site very often went offline with error messages as such as the following: "The website is down due to the heavy traffic to follow up with the Egyptian crisis and it will be back within three hours (Time of message: 11GMT)".