From Infogalactic: the planetary knowledge core
Jump to: navigation, search
For other uses, see Alabaster (disambiguation).

Alabaster is a name applied to varieties of two distinct minerals, when used as a material: gypsum (a hydrous sulfate of calcium) and calcite, a carbonate of calcium, also known as onyx-marble, Egyptian alabaster or Oriental alabaster. In geological terms alabaster is "a stalagmitic limestone marked with patterns of swirling bands of cream and brown".[1] In general, but not always, ancient alabaster in Egypt and the Near & Middle East is calcite. Alabaster in medieval Europe is gypsum. Modern alabaster is probably calcite, but may be either. Both are easy to 'work' and as both are slightly water-soluble, have been used for making a variety of indoor artworks and carvings, as they will not survive long outdoors.

The two kinds are readily distinguished from each other by differences in their relative hardness. The gypsum kind is so soft as to be readily scratched with a fingernail (Mohs hardness 1.5 to 2), while the calcite kind is too hard to be scratched in this way (Mohs hardness 3), although it does yield readily to a knife. Moreover, the calcite alabaster, being a carbonate, effervesces upon being touched with hydrochloric acid, whereas the gypsum alabaster, when thus treated, remains practically unaffected.

The characteristic color of white alabaster has lent its name as a common description of white things, particularly "alabaster skin", which means very light and quite translucent, and possibly derives from the use of alabaster for tomb effigies.[citation needed]

The origin of the word alabaster is in Middle English, through Old French alabastre, in turn derived from the Latin alabaster and that from Greek ἀλάβαστρος (alabastros) or ἀλάβαστος (alabastos). The latter was a term used to identify a vase made of alabaster.[2]

This name may derive further from the Ancient Egyptian word a-labaste, which refers to vessels of the Egyptian goddess Bast. She was represented as a lioness and frequently depicted as such in figures placed atop these alabaster vessels.[3][4] Other suggestions include derivation from the town of Alabastron in Egypt.[5]

This substance, the "alabaster" of the Ancient Egyptians and Bible, often is termed Oriental alabaster, since the early examples came from the Far East. The Greek name alabastrites is said to be derived from the town of Alabastron, in Egypt, where the stone was quarried. The locality probably owed its name to the mineral; the origin of the mineral name is obscure (though see above).

The "Oriental" alabaster was highly esteemed for making small perfume bottles or ointment vases called alabastra; the vessel name has been suggested as a possible source of the mineral name. In Egypt craftsmen used alabaster for canopic jars and various other sacred and sepulchral objects. A sarcophagus, sculptured in a single block of translucent calcite alabaster from Alabastron, is in the Sir John Soane's Museum, London. This was discovered by Giovanni Belzoni in 1817 in the tomb of Seti I near Thebes. It was purchased by Sir John Soane.

When cut in thin sheets, alabaster is translucent enough to be used for small windows. It was used for this purpose in medieval churches, especially in Italy. Large alabaster sheets are used extensively in the contemporary Cathedral of Our Lady of the Angels, which was dedicated in 2002 by the Los Angeles, California Archdiocese. The cathedral incorporates special cooling to prevent the panes from overheating and turning opaque.

Calcite alabaster is found as either a stalagmitic deposit, from the floor and walls of limestone caverns, or as a kind of travertine, similarly deposited in springs of calcareous water. Its deposition in successive layers gives rise to the banded appearance that the marble often shows on cross-section, from which it derives its name: onyx-marble or alabaster-onyx, or sometimes simply as onyx. The latter term should be restricted to siliceous minerals, however.

Egyptian alabaster has been worked extensively near Suez and Assiut. Many ancient quarries are found in the hills overlooking the plain of Tell el Amarna.

Algerian onyx-marble has been quarried largely in the province of Oran. In Mexico, there are famous deposits of a delicate green variety at La Pedrara, in the district of Tecali, near Puebla. Onyx-marble occurs also in the district of Tehuacán and at several localities in California, Arizona, Utah, Colorado, and Virginia. 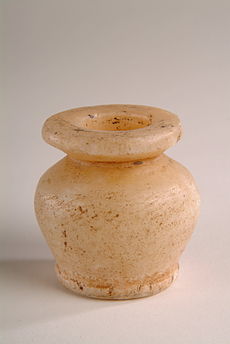 Gypsum alabaster was very widely used for small sculpture for indoor use in the ancient world, especially in Ancient Egypt and Mesopotamia. Fine detail could be obtained in a material with an attractive finish without iron or steel tools. Alabaster was used for vessels dedicated for use in the cult of the deity Bast in the culture of the Ancient Egyptians, and thousands of gypsum alabaster artifacts dating to the late 4th millennium BC also have been found in Tell Brak (present day Nagar), in Syria.[6] In Mesopotamia, gypsum alabaster was the typical material for figures of deities and devotees from temples, as in a figure believed to represent the deity, Abu, dating to the first half of the 3rd millennium BC in New York.[7]

Gypsum alabaster is a common mineral, which occurs in England in the Keuper marls of the Midlands, especially at Chellaston in Derbyshire, at Fauld in Staffordshire, and near Newark in Nottinghamshire. Deposits at all of these localities have been worked extensively. In the 14th and 15th centuries its carving into small statues and sets of relief panels for altarpieces was a valuable local industry in Nottingham, as well as a major English export. These were usually painted, or partly painted. It was also used for the effigies, often life size, on tomb monuments, as the typical recumbent position suited the material's lack of strength, and it was cheaper and easier to work than good marble. Besides examples of these carvings still in Britain (especially at the Nottingham Castle Museum, British Museum, and Victoria and Albert Museum), trade in mineral alabaster (rather than just the antiques trade) has scattered examples in the material that may be found as far afield as the Musée de Cluny, Spain, and Scandinavia.

Much of the world’s alabaster extraction is performed in the centre of the Ebro Valley in Aragon, Spain. Elsewhere, it has either been depleted, or its extraction is so difficult that it has almost been abandoned or is carried out at a very high cost. Aragon has the privilege of having the largest known exploitable deposits. There are two different sites, which are geographically separated, though both are located in Tertiary basins. The most important one corresponds to the Fuentes-Azaila area, in the Tertiary Ebro Basin. The other area where this resource is present is the Calatayud-Teruel Basin, which divides the Iberian Range in two main sectors (NW and SE). The abundance of Aragonese alabaster must have been crucial for its use in architecture, sculpture and decoration. There is no record of likely use by preRoman cultures, so perhaps the first ones to use alabaster in Aragon were the Romans, who produced vessels with alabaster following the Greek and Egyptian models. It seems that since the reconstruction of the Roman Wall in Zaragoza in the 3rd century AD with alabaster, the use of this material became common in building for centuries. Muslim Saraqusta (today, Zaragoza) was also called "Medina Albaida", the White City, due to the appearance of its alabaster walls and palaces, which stood out among gardens, groves and orchards by the Ebro and Huerva Rivers. The oldest remains in the Aljafería Palace, together with other interesting elements like capitals, reliefs and inscriptions, were made using alabaster. But it was during the artistic and economic blossoming of the Renaissance that Aragonese alabaster reached its Golden Age. In the 16th century sculptors in Aragon chose alabaster for their best works. They were adept at exploiting its lighting qualities and generally speaking the finished art pieces retained their natural color.[8]

Alabaster also is found, although in smaller quantity, at Watchet in Somerset, near Penarth in Glamorganshire, and elsewhere. In Cumbria it occurs largely in the New Red rocks, but at a lower geological horizon. The alabaster of Nottinghamshire and Derbyshire is found in thick nodular beds or "floors" in spheroidal masses known as "balls" or "bowls" and in smaller lenticular masses termed "cakes." At Chellaston, where the local alabaster is known as "Patrick," it has been worked into ornaments under the name of "Derbyshire spar"—a term more properly applied to fluorspar.

In Europe, the centre of the alabaster trade today is Florence, Italy. Tuscan alabaster occurs in nodular masses embedded in limestone, interstratified with marls of Miocene and Pliocene age. The mineral is worked largely by means of underground galleries, in the district of Volterra. Several varieties are recognized—veined, spotted, clouded, agatiform, and others. The finest kind, obtained principally from Castellina, is sent to Florence for figure-sculpture, while the common kinds are carved locally, into vases, lights, and various ornamental objects. These items are objects of extensive trade, especially in Florence, Pisa, and Livorno. Spain and many other countries have deposits which have been worked.

Black alabaster is a rare anhydrite form of the gypsum-based mineral. This black form is found in only three veins in the world, one each in Oklahoma, Italy, and China.

Alabaster Caverns State Park, near Freedom, Oklahoma is home to a natural gypsum cave in which much of the gypsum is in the form of alabaster. There are several types of alabaster found at the site, including pink, white, and the rare black alabaster.

The finer kinds of alabaster are employed largely as an ornamental stone, especially for ecclesiastical decoration and for the rails of staircases and halls. Its softness enables it to be carved readily into elaborate forms, but its solubility in water renders it unsuitable for outdoor work. If alabaster with a smooth, polished surface is washed with dishwashing liquid, it will become rough, dull and whiter, losing most of its translucency and lustre.

The purest alabaster is a snow-white material of fine uniform grain, but it often is associated with an oxide of iron, which produces brown clouding and veining in the stone. The coarser varieties of alabaster are converted by calcination into plaster of Paris, whence they sometimes are known as "plaster stone."

In order to diminish the translucency of the alabaster and to produce an opacity suggestive of true marble, the statues are immersed in a bath of water and heated gradually—nearly to the boiling-point—an operation requiring great care, for if the temperature is not regulated carefully, the stone acquires a dead-white, chalky appearance. The effect of heating appears to be a partial dehydration of the gypsum. If properly treated, it very closely resembles true marble and is known as marmo di Castellina.

Sulphate of lime (gypsum) also was used by the ancients. It was employed, for instance, in Assyrian sculpture. So some of the ancient alabaster is identical to the modern stone.

Alabaster may be stained to disguise it, by being heated in various pigmentary solutions. In this way a very misleading imitation of coral that is called alabaster coral is produced.