Alalakh (Hittite: Alalaḫ) was an ancient city-state, a late Bronze Age capital in the Amuq River valley of Turkey's Hatay Province. It was occupied from before 2000 BC, when the first palace was built, and likely destroyed in the 12th century BC and never reoccupied. The city contained palaces, temples, private houses and fortifications. Modern Antakya has developed near the site.

The remains of Alalakh have formed an extensive mound; the modern archaeological site is known as Tell Atchana. It was first excavated in the 1930s and 1940s by a British team. A team sponsored by the University of Chicago started surveys in the late 20th century, and has conducted excavations led by K. Aslihan Yener in the early 21st century. She is now leading work sponsored by Mustafa Kemal University and the Turkish government.

Alalakh was founded by the Amorites (in the territory of present-day Turkey) during the Middle Bronze Age in the 2nd millennium BC. The first palace was built c. 2000 BC, contemporary with the Third Dynasty of Ur.

The written history of the site may begin under the name Alakhtum, with tablets from Mari in the 18th century BC, when the city was part of the kingdom of Yamhad (modern Aleppo). A dossier of tablets records that King Sumu-Epuh sold the territory of Alakhtum to his son-in-law Zimri-Lim, king of Mari, retaining for himself overlordship. After the fall of Mari in 1765 BC, Alalakh seems to have come under the rule of Yamhad again. King Abba-El I of Aleppo bestowed it upon his brother Yarim-Lim, to replace the city of Irridu. Abba-El had destroyed the latter after it revolted against his brother Yarim-Lim.[1] A dynasty of Yarim-Lim's descendents was founded, under the hegemony of Aleppo, that lasted to the 16th century. According to the short chronology found at Mari, at that time Alalakh was destroyed, most likely by Hittite king Hattusili I, in the second year of his campaigns.

After a hiatus of less than a century, written records for Alalakh resume. At this time, it was again the seat of a local dynasty. Most of the information about the founding of this dynasty comes from a statue inscribed with what seems to be an autobiography of the dynasty's founding king.[2]

According to his inscription, in the 15th century BC, Idrimi, son of the king of Yamhad, may have fled his city for Emar, traveled to Alalakh, gained control of the city, and been recognized as a vassal by Barattarna. The inscription records Idrimi's vicissitudes: after his family had been forced to flee to Emar, he left them and joined the "Hapiru people" in "Ammija in the land of Canaan." The Hapiru recognized him as the "son of their overlord" and "gathered around him"; after living among them for seven years, he led his Habiru warriors in a successful attack by sea on Alalakh, where he became king.

However, according to the archeological site report, this statue was discovered in a level of occupation dating several centuries after the time that Idrimi lived. There has been much scholarly debate as to its historicity. Archeologically-dated tablets recount that Idrimi's son Niqmepuh was contemporaneous with the Mitanni king Saushtatar. This seems to support the inscription on the statue claiming that Idrimi was contemporaneous with Barattarna, Saushtatar's predecessor.[3]

The socio-economic history of Alalakh during the reign of Idrimi's son and grandson, Niqmepuh and Ilim-ilimma, is well documented by tablets excavated from the site. Idrimi is referred to rarely in these tablets.

In the mid-14th century BC, the Hittite Suppiluliuma I defeated king Tushratta of Mitanni and assumed control of northern Syria, then including Alalakh, which he incorporated into the Hittite Empire. A tablet records his grant of much of Mukish's land (that is, Alalakh's) to Ugarit, after the king of Ugarit alerted the Hittite king to a revolt by the kingdoms of Mukish, Nuhassa, and Niye. Alalakh was probably destroyed by the Sea People in the 12th century BC, as were many other cities of coastal Anatolia and the Levant. The site was never reoccupied, the port of Al Mina taking its place during the Iron Age. 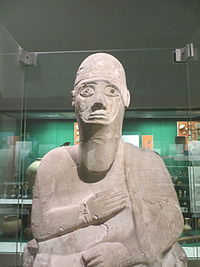 Statue of Idrimi in the British Museum

Tell Atchana was excavated by the British archaeologist Sir Leonard Woolley in the years 1937-1939 and 1946–1949. His team discovered palaces, temples, private houses and fortification walls, in 17 archaeological levels reaching from late Early Bronze Age (Level XVII, ca. 2200—2000 BC to Late Bronze Age (Level 0, 13th century BC). Among their finds was the inscribed statue of Idrimi, a king of Alalakh c.early 15th century BC. [4]

After several years' surveys in the late 20th century, the University of Chicago team had its first full season of excavation in 2003 directed by K. Aslihan Yener. In 2004, the team had a short excavation and study season in order to process finds.[5][6][7][8] In 2006 the project changed sponsorship and resumed excavations directed by Aslihan Yener under the Turkish Ministry of Culture and Tourism and Mustafa Kemal University in Antakya.

About five hundred cuneiform tablets were retrieved at Level VII, (Middle Bronze Age) and Level IV (Late Bronze Age). The inscribed statue of Idrimi, a king of Alalakh ca. early 15th century BC, has provided a unique autobiography of Idrimi's youth, his rise to power, and his military and other successes. The statue is now held in the British Museum. Akkadian texts from Alalakh primarily consist of juridical tablets, which record the ruling family's control over land and the income that followed, and administrative documents, which record the flow of commodities in and out of the palace. In addition, there are a few word lists, astrological omens and conjurations.