Alameda County is included in the San Francisco Bay Area, occupying much of the East Bay region.

The county was formed on March 25, 1853, from a large portion of Contra Costa County and a smaller portion of Santa Clara County.

The Spanish word alameda means "a place where poplar trees grow," a name originally given to the Arroyo de la Alameda (Poplar Grove Creek). The willow and sycamore trees along the banks of the river reminded the early explorers of a road lined with trees, also known as an alameda.[7][8]

The county seat at the time it was formed was located at Alvarado; it was moved to San Leandro in 1856 where the county courthouse was destroyed by the devastating 1868 quake on the Hayward Fault. The county seat was then re-established in the town of Brooklyn from 1872-1875. Brooklyn is now part of Oakland, which has been the county seat since 1873.

Much of what is now considered an intensively urban region, with major cities, was developed as a trolley car suburb of San Francisco in the late 19th and early 20th centuries. The historical progression from Native American tribal lands to Spanish, then Mexican ranches, then to farms, ranches, and orchards, then multiple city centers and suburbs, is shared with the adjacent and closely associated Contra Costa County.

The annual county fair is held at the Alameda County Fairgrounds in Pleasanton. The fair runs for three weekends from June to July. Attractions include horse racing, carnival rides, 4-H exhibits, and live bands. 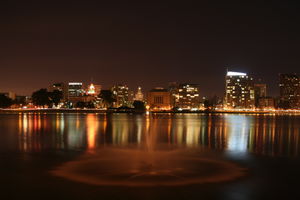 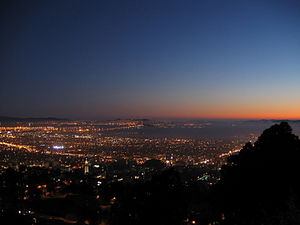 View of Berkeley and the San Francisco Bay at nightfall.

The reconstructed mission at Mission San José (located in Fremont).

The San Francisco Bay borders the county on the west, and the City and County of San Francisco, California has a small land border with the city of Alameda due to land filling.[10] The crest of the Berkeley Hills form part of the northeastern boundary, and reach into the center of the county. A coastal plain several miles wide lines the bay; and is Oakland's most populous region. Livermore Valley lies in the eastern part of the county.

The Hayward Fault, a major branch of the San Andreas Fault to the west, runs through the most populated parts of Alameda County, while the Calaveras Fault runs through the southeastern part of the county.

A 2014 analysis found Alameda County to be the 4th most racially diverse county in the United States.[11] 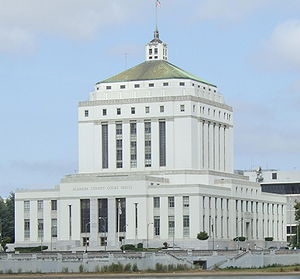 The Government of Alameda County is defined and authorized under the California Constitution, California law, and the Charter of the County of Alameda.[28] Much of the Government of California is in practice the responsibility of county governments such as the Government of Alameda County, while municipalities such as the city of Oakland and the city of Berkeley provide additional, often non-essential services. The County government provides countywide services such as elections and voter registration, law enforcement, jails, vital records, property records, tax collection, and public health. In addition it is the local government for all unincorporated areas, and provides services such as law enforcement to some incorporated cities under a contract arrangement.

It is composed of the elected five-member Alameda County Board of Supervisors (BOS) as the county legislature, several other elected offices and officers including the Sheriff, the District Attorney, Assessor, Auditor-Controller/County Clerk/Recorder, and Treasurer/Tax Collector, and numerous county departments and entities under the supervision of the County Administrator. In addition, several entities of the government of California have jurisdiction conterminous with Alameda County, such as the Alameda County Superior Court.

The current supervisors are:[29]

The Board elects a president who presides at all meetings of the Board and appoints committees to handle work involving the major programs of the county. If the president is absent for a meeting, the vice president shall be responsible. A Board election occurs every two years for these positions. Supervisor Miley is serving currently as president; Supervisor Carson is vice president.

The county's law enforcement is overseen by an elected Sheriff/Coroner and an elected District Attorney. The Sheriff supervises the deputies of the Alameda County Sheriff's Office, whose primary responsibilities include policing unincorporated areas of the county and cities within the county which contract with the Sheriff's Office for police services; providing security and law enforcement for county buildings including courthouses, the county jail and other county properties; providing support resources, such as a forensics laboratory and search and rescue capabilities, to other law enforcement agencies throughout the county; and serving the process of the county's Superior Court system. The District Attorney's office is responsible for prosecuting all criminal violations of the laws of the state of California, the county, or its constituent municipalities, in the Alameda County Superior Court. The current Sheriff is Gregory J. Ahern, who was elected in 2006, succeeding Charles Plummer, who had served in the post for 20 years. The Interim District Attorney is Nancy E. O'Malley, who was appointed to fill the position of retiring District Attorney Tom Orloff in September 2009. The Sheriff's Office operates two jails: Santa Rita Jail in Dublin, and Glenn E. Dyer Detention Facility in downtown Oakland.

The Alameda County Fire Department (ACFD)[30] was formed on July 1, 1993 as a dependent district, with the Board of Supervisors as its governing body. Municipal and specialized fire departments have been consolidated into the ACFD over the years. 1993 brought in the Castro Valley and Eden Consolidated FD, and the County Fire Patrol. San Leandro joined in 1995, Dublin in 1997, Lawrence Berkeley National Laboratory in 2002, Lawrence Livermore National Laboratory in 2007, The Alameda County Regional Emergency Communications Center in 2008, and Newark and Union City in 2010. Emeryville joined the ACFD in 2012.

Alameda County Superior Court operates in twelve separate locations throughout the county, with its central René C. Davidson Courthouse located in Oakland near Lake Merritt. Most major criminal trials and complex civil cases are heard at this location or in courtrooms within the County Administration Building across the street.

In the California State Assembly, Alameda County is split between five districts:

In the California State Senate, the county is split between three districts:

In the United States House of Representatives, the county is split between three districts:

Alameda County is a stronghold of the Democratic Party. It has not voted for a Republican presidential candidate since 1956, when Dwight Eisenhower carried the county. Historically, the county was Republican until the 1958 defeat of William F. Knowland. Even when Ronald Reagan won the national popular vote by an 18.3% margin in 1984, Walter Mondale won Alameda County by a slightly larger margin. In 2004 it voted for John Kerry by a margin of over 75%. Every city and town voted Democratic.[34]

On November 4, 2008 Alameda County voted 62.0% against Proposition 8, which won statewide, and which amended the California Constitution to ban same-sex marriage. The county garnered the sixth highest "no" vote, by percentage, of all California counties, and was the second largest county, by total voter turnout, to vote against it.[35]

The Alameda County Library operates libraries in the cities of Albany, Dublin, Fremont, Newark and Union City and the unincorporated communities of Castro Valley and San Lorenzo. The cities of Alameda, Berkeley, Hayward, Livermore, Oakland, San Leandro, and Pleasanton have their own library systems.

Other colleges and universities located within Alameda county include:

The Alameda County Arts Commission, a division of the county administration, under the California Arts Council, was created in 1965. Its fifteen appointed members act in an advisory capacity to the board of supervisors, in promoting the arts. The Oakland Museum of California has a substantial collection of California art works and historical artifacts.

There are more than 350 parks located within the county.[39] The East Bay Regional Park District operates within Alameda and neighboring Contra Costa County, with numerous parks within the county, including, Tilden Regional Park, Redwood Regional Park, and Anthony Chabot Regional Park. Eastshore State Park is located partially along the bay shore of northern Alameda County. The San Francisco Bay Trail, a project of the Association of Bay Area Governments, will run along the bay shore of the county.[40] The Hayward Area Recreation and Park District is the largest special park district in California. 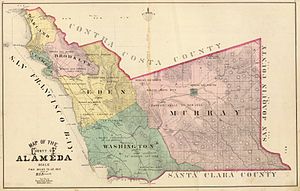