Alan Wolf Arkin (born March 26, 1934) is an Academy Award winning American actor, director, comedian, musician and singer. With a film career spanning nearly 60 years, Arkin is known for his performances in Wait Until Dark, The Russians Are Coming, the Russians Are Coming, The Heart is a Lonely Hunter, Catch-22, The In-Laws, Edward Scissorhands, Glengarry Glen Ross, Thirteen Conversations About One Thing, Little Miss Sunshine, and Argo.

Arkin was born in Brooklyn, New York City, the son of David I. Arkin, a painter and writer, and his wife, Beatrice (Wortis), a teacher.[1] He was raised in a Jewish family with "no emphasis on religion". His grandparents were immigrants from Ukraine, Russia, and Germany.[2][3] His parents moved to Los Angeles when Alan was 11,[2] but an eight-month Hollywood strike cost his father his job as a set designer. During the 1950s Red Scare, Arkin's parents were accused of being Communists, and his father was fired when he refused to answer questions about his political ideology. David Arkin challenged the dismissal, but he was vindicated only after his death.[4] 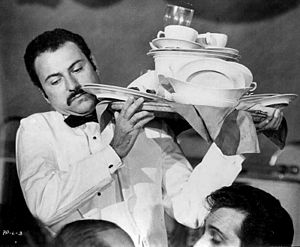 Arkin, who had been taking acting lessons since age 10, became a scholarship student at various drama academies, including one run by the Stanislavsky student Benjamin Zemach, who taught Arkin a psychological approach to acting.[5] Arkin attended Los Angeles City College from 1951 to 1953. He also attended Bennington College.[citation needed] With two friends, he formed the folk music group The Tarriers, in which Arkin sang and played guitar. The band members co-composed the group's 1956 hit "The Banana Boat Song", a reworking, with some new lyrics, of a traditional, Jamaican calypso folk song of the same name, combined with another titled "Hill and Gully Rider".[6] It reached #4 on the Billboard magazine chart the same year as Harry Belafonte's better-known hit version.[7] The group appeared in the 1957 Calypso-exploitation film Calypso Heat Wave, singing "Banana Boat Song" and "Choucoune".[citation needed]

From 1958 to 1968, Arkin performed and recorded with the children's folk group, The Baby Sitters.[8] He also performed the role of Dr. Pangloss in a concert staging of Leonard Bernstein's operetta Candide, alongside Madeline Kahn's Cunegonde. Arkin was an early member of The Second City comedy troupe in the 1960s.[9] 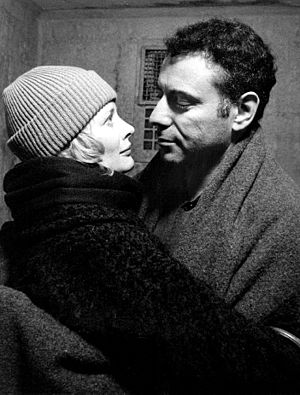 With Shirley Knight in TV special, The Defection of Simas Kudirka (1978)

In 1968, he appeared in the title role of Inspector Clouseau, after Peter Sellers disassociated himself from the role, but the film was not well received by Sellers' fans. Arkin and his second wife, Barbara Dana, appeared together on the 1970–71 season of Sesame Street as a comical couple named Larry and Phyllis who resolve their conflicts when they remember how to pronounce the word "cooperate."

His role in Little Miss Sunshine, as Grandfather Edwin, who was foul-mouthed and had a taste for heroin, won him the BAFTA Film Award for Best Actor in a Supporting Role and the Academy Award for Best Actor in a Supporting Role. On receiving his Academy Award on February 25, 2007, Arkin said, "More than anything, I'm deeply moved by the open-hearted appreciation our small film has received, which in these fragmented times speaks so openly of the possibility of innocence, growth and connection".[11] At 72 years old, Arkin was the sixth oldest winner of the Best Supporting Actor Oscar.

In 2006–07, Arkin was cast in supporting roles in Rendition as a US senator and The Santa Clause 3: The Escape Clause as Bud Newman (Carol's Dad), starring with Tim Allen, Martin Short, Elizabeth Mitchell, Judge Reinhold and Wendy Crewson.

On Broadway, Arkin starred in Enter Laughing, for which he won a Tony Award, and Luv. He also directed The Sunshine Boys, among others.

Arkin's directorial debut, in 1969, was a 12-minute children's film, People Soup, starring his sons Adam Arkin and Matthew Arkin. Based on a story of the same name he published in Galaxy Science Fiction in 1958, People Soup is a fantasy about two boys who experiment with various kitchen ingredients until they concoct a magical soup which transforms them into different animals and objects. 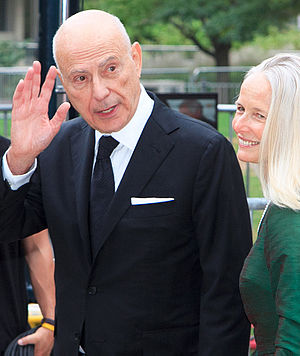 Arkin's most acclaimed directorial effort is Little Murders, released in 1971. Written by cartoonist Jules Feiffer, Little Murders is a black comedy film starring Elliott Gould and Marcia Rodd about a girl, Patsy (Rodd), who brings home her boyfriend, Alfred (Gould), to meet her severely dysfunctional family amidst a series of random shootings, garbage strikes and electrical outages ravaging the neighborhood. The film opened to a lukewarm review by Roger Greenspan,[12] and a more positive one by Vincent Canby[13] in the New York Times. Roger Ebert's review in the Chicago Sun Times was more enthusiastic, saying, "One of the reasons it works, and is indeed a definitive reflection of America's darker moods, is that it breaks audiences down into isolated individuals, vulnerable and uncertain."[14]

Arkin is the author of many books, including the children's stories Tony's Hard Work Day (illustrated by James Stevenson, 1972), The Lemming Condition (illustrated by Joan Sandin, 1976), Halfway Through the Door: An Actor's Journey Toward Self (1979) and The Clearing (1986 continuation of Lemming). In March 2011, he released his memoir, An Improvised Life.[15]