Sir Alan Arthur Bates, CBE (17 February 1934 – 27 December 2003) was an English actor who came to prominence in the 1960s, a time of high creativity in British cinema, when he appeared in films ranging from the popular children's story Whistle Down the Wind to the "kitchen sink" drama A Kind of Loving. He is also known for his performance with Anthony Quinn in Zorba the Greek, as well as his roles in King of Hearts, Georgy Girl, Far From the Madding Crowd, and The Fixer, in which he received an Academy Award nomination for Best Actor. In 1969, he starred in the Ken Russell film Women in Love with Oliver Reed and Glenda Jackson.

Bates went on to star in The Go-Between, An Unmarried Woman, Nijinsky, and The Rose with Bette Midler, as well as playing varied roles in television drama, including The Mayor of Casterbridge, Harold Pinter's The Collection, A Voyage Round My Father, An Englishman Abroad (as Guy Burgess), and Pack of Lies. He also continued to appear on the stage, notably in the plays of Simon Gray, such as Butley and Otherwise Engaged.

Bates was born at the Queen Mary Nursing Home,[1] Darley Abbey, Derby, England, on 17 February 1934, the eldest of three sons of Florence Mary (née Wheatcroft), a housewife and a pianist, and Harold Arthur Bates, an insurance broker and a cellist,[2] who lived in Allestree, Derby, at the time. The family briefly moved to Mickleover, then returned to Allestree. 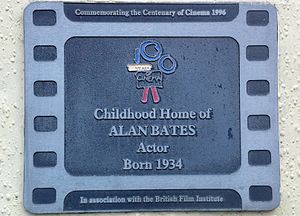 The Blue Plaque on Alan Bates's childhood home. In association with The British Film Institute

Both of his parents were amateur musicians, and encouraged him to pursue music, but by age 11, young Bates already had determined his life's course as an actor, and so they sent him for dramatic coaching instead.[3] He also saw productions at Derby's Little Theatre.

He was educated at the Herbert Strutt Grammar School, Derby Road, Belper, Derbyshire (now 'Strutts', a volunteer led Business & Community Centre) and later gained a scholarship to the Royal Academy of Dramatic Art in London, where he studied with Albert Finney and Peter O'Toole, before leaving to join the RAF for National Service at RAF Newton.

Bates's stage debut was in 1955, in You and Your Wife, in Coventry.[4] In 1956 he made his West End debut as Cliff in Look Back in Anger, a role he had originated at the Royal Court and which made him a star. He also played the role on television (for the ITV Playhouse) and on Broadway. In the late 1950s Bates appeared in several plays for television in Britain. In 1960 he appeared in The Entertainer opposite Laurence Olivier, his first film role. Bates worked for the Padded Wagon Moving Company in the early 1960s while acting at the Circle in the Square Theatre in New York City. Throughout the 1960s he starred in several major films including Whistle Down the Wind (1961), A Kind of Loving (1962), Zorba the Greek (1964), Philippe de Broca's King of Hearts (1966), Georgy Girl (1966), Far From the Madding Crowd (1967) and the Bernard Malamud film The Fixer (1968), which gave him an Academy Award nomination for Best Actor. In 1969 he starred in Women in Love.

Bates was handpicked by director John Schlesinger (with whom he had previously worked on A Kind of Loving and Far From The Madding Crowd) to star in the film Sunday Bloody Sunday (1971) to play Dr. Daniel Hirsh. Bates was held up filming The Go-Between (1971) for director Joseph Losey, and had also become a father around that time, and so he had to refuse the role. (The part then went first to Ian Bannen, who balked at kissing and simulating sex with another man, and then to Peter Finch who earned an Academy Award nomination for the role.)

Around this time he appeared as Col. Vershinin in the National Theatre's film of Three Sisters, directed by and co-starring Laurence Olivier.[5] He later worked with Olivier for television in the Laurence Olivier Presents version of Harold Pinter's The Collection (1976) and A Voyage Round My Father (1982).

Bates starred in such international films as An Unmarried Woman (1978) and Nijinsky (1980), and also played Bette Midler's ruthless business manager in the film The Rose (1979). On television, his parts included Michael Henchard, the ultimately-disgraced lead in The Mayor of Casterbridge - which he described as his favourite role - in the serial adaptation by Dennis Potter (1978). Two diametrically-opposed roles were in An Englishman Abroad (1983), as Guy Burgess, a member of the Cambridge spy ring by then exiled in Moscow, and Pack of Lies (1987), in which he played a British Secret Service agent tracking several Soviet spies. He continued working in film and television in the 1990s, including the role of Claudius in Mel Gibson's version of Hamlet (1990), though most of his roles in this era were more low-key.[citation needed]

In 2001 Bates joined an all-star cast in Robert Altman's critically acclaimed period drama Gosford Park, in which he played the butler Jennings. He later played Antonius Agrippa in the 2004 TV film Spartacus, but died before it debuted. The film was dedicated to his memory and that of writer Howard Fast, who wrote the original novel that inspired the film Spartacus by Stanley Kubrick.

On stage Bates had a particular association with the plays of Simon Gray, appearing in Butley, Otherwise Engaged, Stage Struck, Melon, Life Support and Simply Disconnected, as well as the film of Butley and Gray's TV series Unnatural Pursuits. In Otherwise Engaged, his co-star was Ian Charleson, who became a friend, and Bates later contributed a chapter to a 1990 book on his colleague after Charleson's early death.[6]

Bates was made a Commander of the Order of the British Empire (CBE) in 1996, and was knighted in 2003. He was an Associate Member of RADA and was a patron of The Actors Centre, Covent Garden, London, from 1994 until his death in 2003.[citation needed]

Bates was married to Victoria Ward from 1970 until her death in 1992, although they had separated many years earlier.[7][8] They had twin sons, born in November 1970, the actors Benedick Bates and Tristan Bates. Tristan died following an asthma attack in Tokyo in 1990.[9] Other sources report Tristan died of a heroin overdose in a public toilet.[10]

Bates had numerous homosexual relationships throughout his life, including those with actors Nickolas Grace and Peter Wyngarde and with Olympic skater John Curry.[11] In 1994 Curry died from AIDS in Bates' arms.[11] Even when homosexuality was partially decriminalised in Britain in 1967,[12] Bates rigorously avoided interviews and questions about his personal life, and even denied to his male lovers that there was a homosexual component in his nature.[11] While throughout his life Bates sought to be regarded as a ladies' man or at least as a man who, as an actor, could appear attractive to and attracted by women, he also chose to take on many roles with an aspect of homosexuality or bisexuality.[11] He let this part of his life appear as he played the role of the sexually-frustrated Rupert in the 1970 film Women in Love.

In the later years of his life, Bates had a relationship with the Welsh actress Angharad Rees[13] and in the last years, his companion was his lifelong friend, actress Joanna Pettet, his co-star in the 1964 Broadway play Poor Richard. They divided their time between New York and London.

Bates had undergone a hip replacement shortly before being diagnosed with inoperable pancreatic cancer in January 2003. He suffered a stroke later that year, and died in December after going into a coma.[14]

The posthumous publication of Donald Spoto's 2007 book, Otherwise Engaged: The Life of Alan Bates,[15] is the only authorised biography of Alan Bates. It was written with the full and complete cooperation of his son Benedick Bates and Bates's younger brother Martin, and includes more than one hundred interviews with people such as Michael Linnit and Rosalind Chatto.

Bates and his family set up the Tristan Bates Theatre, at the Actors' Centre in Covent Garden, in memory of his son, Tristan, who died at the age of 19.[16] Tristan's twin brother, Benedick, is a vice-director.[17]