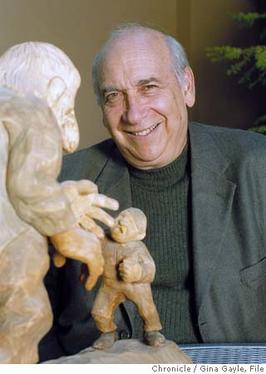 Alan Dundes (September 8, 1934 – March 30, 2005)[1] was a folklorist at the University of California, Berkeley. His work was said to have been central to establishing the study of folklore as an academic discipline.[citation needed] He wrote 12 books, both academic and popular, and edited or co-wrote two dozen more.[2] One of his most notable articles was called "Seeing is Believing" in which he indicated that Americans value the sense of sight more than the other senses.

He introduced the concept "allomotif" (coined in an analogy with "allomorph", to complement the concept of "motifeme" (cf. "morpheme") introduced by Kenneth L. Pike) as concept to be used in the analysis of the structures of folktales in terms of motifs identified in them.[3][4]

Dundes attended Yale University, where he studied English[1] and met his wife Carolyn. Sure that he would be drafted upon completion of his studies, Dundes joined the ROTC and trained to become a naval communications officer. When it turned out that the ship he was to be posted to, stationed in the Bay of Naples, already had a communications officer, Dundes asked what else that ship might need, not wanting to give up such a choice assignment. He then spent two years maintaining artillery guns on a ship in the Mediterranean. Upon completion of his service, Dundes attended Indiana University to pursue a Ph.D in folklore. At Indiana, he studied under the father of American Folklore, Richard Dorson.[1] He quickly established himself as a force to be reckoned with in the field of folkloristics. He completed his degree very quickly and went on to a teaching position at the University of Kansas where he stayed for only a year before being offered a position in the University of California, Berkeley anthropology department teaching folklore. Dundes held this position for 42 years, until his death in 2005.

Alan Dundes was an engaging lecturer, his Introduction to Folklore course attracting many students. In this course, students were introduced to the many various forms of folklore, from myth, legend, and folktale to proverbs and riddles to jokes, games, and folkspeech (slang), to folk belief and foodways. The final project for this course required that each student collect, identify, and analyze 40 items of folklore. All of this material (about 500,000 items) is housed and cataloged in the Berkeley Folklore Archives. Dundes also taught undergraduate courses in American folklore, and psychoanalytic approaches to folklore (his favorite approach) in addition to graduate seminars on the history of folkloristics, from an international perspective, and the history and progression of folklore theory.

Dundes was also a great supporter of the New Student Orientation Program at UC Berkeley (CalSO). He frequently gave the opening address during summer orientation programs, whetting students' appetites about the type of instruction they might receive at the University. These addresses were littered with jokes and stories which were a trademark of Dundes' lectures in his popular anthropology class and were a favorite of both in-coming students and the orientation staff alike.[citation needed]

Strongly opinionated, Dundes was not at all averse to the controversy that his theories often generated. He dealt frequently with folklore as an expression of unconscious desires and anxieties and was of the opinion that if people reacted strongly to what he had to say, he had probably hit a nerve and was probably on to something. Some of his more controversial work involved examining the New Testament and the Qur'an as folklore.[5] However, of all his articles, the one that earned him death threats was "Into the Endzone for a Touchdown", an exploration of the homoerotic subtext inherent in the terminology and rituals surrounding American football.[6] In 1980, Dundes was invited to give the presidential address at the American Folklore Society annual meeting.[7] His presentation, later published as a monograph titled "Life is Like a Chicken Coop Ladder", uses folkspeech, customs, material culture, and so forth seeking to demonstrate an anal-erotic fixation of German national character.[6] Reaction to this paper was incredibly strong[6] and because of it, Dundes declined to attend the AFS annual meeting for the next 20 years.[citation needed] When he finally did attend again, in 2004, he again gave a plenary address, this time taking his fellow folklorists to task for being weak on theory. In his opinion, the presentation of data, no matter how thorough, is useless without the development and application of theory to that data. It is not enough to simply collect, one must do something with what one has collected.[8] In 2012, linguist Anatol Stefanowitsch credited Dundes with having given rise to a still prevalent "stereotype about Germany as a culture enamored with excretion", but called his monograph "unstructured, poorly argued and flimsily sourced" and "methodologically flawed because he only looked for evidence supporting his theory, and not – as even a folklorist should – for evidence against his theory".[9]

Endowment of a professorship

Dundes fiercely defended the importance of the discipline of folkloristics throughout his career. Towards the end of his life, he received an envelope containing a check from a former student, which he asked his wife to open. She read the figure out as $1,000. In fact, the check was for $1,000,000. This money allowed Dundes to endow the university with a Distinguished Professorship in Folkloristics, thereby ensuring that upon his retirement folklore would not be abandoned in the department.[10]

The former student and benefactor wished to remain anonymous. Apparently he or she called the university prior to the donation to find out if Dundes was still teaching, or as Dundes told it, "to see if I was still alive." The student mentioned that he or she intended to send a check, but Dundes said he was not sure the student would follow through.

The check was made out to the university, Dundes said, but with instructions that he could use it in any manner he saw fit.

"I could just take all my students to Fiji and have one hell of a party," he said.

The professor instead decided to invest it in the study of folklore. The money funds a Distinguished Professorship of Folkloristics and helps fund the university's folklore archives and provides grants for folklore students.[11]

Shortly before his death, Dundes was interviewed by filmmaker Brian Flemming for his documentary, The God Who Wasn't There. He prominently recounted Lord Raglan's 22-point scale from his 1936 book The Hero, in which he ranks figures possessing similar divine attributions.[12] An extended interview[13] is on the DVD version of the documentary.

Dundes collapsed and died while giving a graduate seminar.[2]