Alan Arthur Johnson (born 17 May 1950) is a British Labour Party politician who served as Home Secretary from June 2009 to May 2010. Before that, he filled a wide variety of cabinet positions in both the Blair and Brown governments, including Health Secretary and Education Secretary. Until 20 January 2011 he was Shadow Chancellor of the Exchequer. Johnson has been the Member of Parliament for Hull West and Hessle since the 1997 general election.

Born in London on 17 May 1950, the son of Stephen and Lillian Johnson,[1] he was orphaned at the age of 12 when his mother died. Johnson was then in effect brought up by his older sister Linda when the two were assigned a council flat by their child welfare officer.[2][3][4] Linda, then herself only 16, has since been recognised as the hero of Johnson's poignant 2013 memoir This Boy: A Memoir of a Childhood.[5] He passed the 11 plus exam and attended Sloane Grammar school in Chelsea, now part of Pimlico Academy, and left school at the age of 15.[3] He then stacked shelves at Tesco before becoming a postman at 18.[2] He was interested in music and joined two pop music bands.[3] Johnson joined the Union of Communication Workers, becoming a branch official. He joined the Labour Party in 1971, although he considered himself a Marxist ideologically aligned with the Communist Party of Great Britain.[6] A full-time union official from 1987, he became General Secretary of the union in 1992. By this time, however, as his memoir makes clear, he was more inclined towards the right wing of the Labour Party.

Before entering parliament Johnson was a member of Labour's National Executive Committee. During this time he was the only major union leader to support the abolition of Clause IV.

Just three weeks before the 1997 general election, Johnson was selected to stand for parliament in the safe Labour seat of Hull West and Hessle when the previous incumbent, Stuart Randall, stood down suddenly. Randall was subsequently elevated to the House of Lords.

He was appointed Parliamentary Private Secretary to Dawn Primarolo in 1997 and achieved his first ministerial post at the Department of Trade and Industry (DTI) in 1999. He was moved to the Department for Education and Skills in 2003 as Minister for Higher Education though he had left school at 15.

Johnson, along with other ministers in Tony Blair's government, and many other MPs, attracted much criticism for voting on 18 March 2003 for the Iraq war: "to use all means necessary to ensure the disarmament of Iraq's weapons of mass destruction" leading to the UK joining the US invasion of Iraq two days later.[7] He responded to such criticism on 21 February 2007 by saying "The whole cabinet believed the intelligence we were presented [with] and we made our case to the British people based on it in good faith. As we all now know, that intelligence was wholly wrong. We will be judged historically as to whether getting rid of Saddam Hussein, despite all the consequences, was a positive thing or that the consequences outweigh the positives of getting rid of a brutal tyrant."[8]

During his time as education secretary, Johnson brought in new ideas and proposals, including encouraging parents to spend more time with their children in a bid to help them progress with their literacy and numeracy skills.[10] Johnson has also previously expressed some concerns over diplomas,[11] and has opened up debate in parliament on the subject of what parental situation is best. He stated that in his view, it is the parents themselves who make the difference, not their marital situation.[12] Johnson looked at improving pay and working conditions for teachers during his tenure as Education Secretary.[13]

Johnson became Secretary of State for Health on 28 June 2007, succeeding Patricia Hewitt in Prime Minister Gordon Brown's first Cabinet. He later criticised breast cancer patient Debbie Hirst because she attempted to buy the cancer drug Avastin, which the NHS had denied her. Johnson told Parliament, patients "cannot, in one episode of treatment, be treated on the NHS and then allowed, as part of the same episode and the same treatment, to pay money for more drugs. That way lies the end of the founding principles of the NHS".[14]

When there was a problem with C.difficile at hospitals managed by the Maidstone & Tunbridge Wells NHS Trust, they dismissed their "blameless" chief executive "both unlawfully ... and unfairly" and agreed to pay her £250,000, much less than the sum that they were told that defending a case for unfair dismissal would cost.[15] When the proposed payment became known, Johnson intervened and the Department of Health ordered the trust to withhold more than two-thirds of the severance payment, although its director general of finance, performance and operations said that "it was 'not unfair'" that she should receive the money.[16] When the case came to the Court of Appeal, the payment was restored in a judgement that was highly critical of the Department, including quoting her complaint that Johnson had made "personal comments made about me ... without any reference to the Trust, or informing me, ... regarding my severance value and its non-payment".[17]

On 5 June 2009, he was appointed to the position of Home Secretary during a reshuffle, replacing the first female holder of the post, Jacqui Smith.[18]

In October 2009 Alan Johnson sacked the Chairman of the Advisory Council on the Misuse of Drugs (ACMD), Professor David Nutt. Nutt had accused the government of "distorting" and "devaluing" research evidence in the debate over illicit drugs,[19] criticising it for making political decisions with regard to drug classifications in rejecting the scientific advice to downgrade MDMA (Ecstasy) from a class A drug,[20] and rejecting the scientific advice not to reclassify cannabis from class C to class B drug. Alan Johnson wrote to the professor, "It is important that the government's messages on drugs are clear and as an advisor you do nothing to undermine public understanding of them. I cannot have public confusion between scientific advice and policy and have therefore lost confidence in your ability to advise me as Chair of the ACMD."[21] In January 2010, Professor Nutt established the Independent Scientific Committee on Drugs, with the aim of publishing honest drug information.[22] By 2 April 2010, seven members of the ACMD had resigned.[23]

In February 2010, it came out in court that MI5 had known that Binyam Mohamed, a former Guantanamo Bay detainee, had been tortured or mistreated by the American services, despite earlier statements to the contrary.

In response, Johnson insisted that the media coverage of the torture had been "baseless, groundless accusations".[24] He also claimed that Government lawyers had not forced the judiciary to water down criticism of MI5, despite an earlier, draft ruling by Lord Neuberger, the Master of the Rolls that the Security Service had failed to respect human rights, deliberately misled parliament, and had a "culture of suppression" that undermined government assurances about its conduct.[25]

Johnson publicly stated in May 2006 he expected to stand for the post of Deputy Leader of the Labour Party when John Prescott stepped down. Johnson told the BBC in an interview on 9 November 2006[26] that he would in fact be supporting Brown and standing as deputy leader. He was successfully nominated onto the ballot paper for Labour Deputy leader with most number of nominations. On 24 June 2007,[27] Johnson was narrowly beaten for the deputy leadership by Harriet Harman. He led in rounds 2 to 4 of the voting, until he was overtaken by Harman in the last round, eventually finishing with 49.56% of the vote.

Having been touted in the media as a possible successor to outgoing Labour leader Gordon Brown, Johnson officially announced to the BBC on 12 May 2010 that he would not be standing in the forthcoming leadership contest, and would instead be backing David Miliband.[28]

In November 2014, amid criticism within the party of its leader Ed Miliband, Johnson again denied speculation that he was a potential leadership candidate.[29] 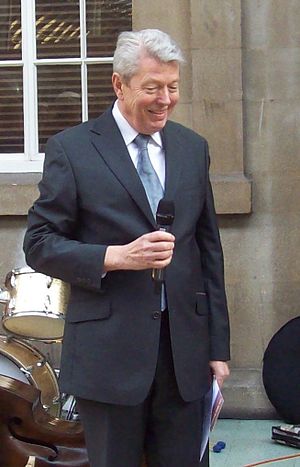 In 2010, there was much speculation that Johnson was going to stand as a candidate for the London Mayoral election after announcing that he was not going to contest the leadership. Many of Johnson's close allies encouraged him to stand for the Mayoralty and he was thought to have been considering it.[30][31] However, Johnson decided not to stand for the Labour Party selection for Mayor and instead backed Oona King for the candidacy, but she lost to Ken Livingstone. In 2011, there was speculation that Livingstone could be deselected as the Labour candidate in favour of Johnson but that did not happen.[32] In 2012, after Livingstone's defeat by Boris Johnson, many Labour members said that Johnson should have been the Labour candidate. Johnson then revealed that he did consider standing for Mayor of London but he felt that his allegiance was to Hull. However, he said that he would not stand for Mayor of London in the 2016 elections as he wants to stay on as an MP.[33]

Johnson is a strong supporter of electoral reform, advocating the Alternative Vote Plus (AV+) system as recommended by the Jenkins Commission.[34] He indicated that he would seek support within the Labour Party for an amendment to the government's Bill on Electoral Reform, to add AV+ as an additional choice in the referendum. In 2010, it was rumoured that he would step down as an MP to trigger a by-election in Hull, to stand on a Proportional representation ticket.[35] He supported the Yes! to Fairer Votes campaign in the referendum on 5 May 2011. He appeared as one of the main Labour supporters of the Yes! campaign at a London event on 3 May 2011, at which Ed Miliband also appeared.

Johnson was chosen as Shadow Chancellor in Ed Miliband's first shadow cabinet, appointed on 8 October 2010.[36] His first major speech was the Opposition response to the comprehensive spending review.[37] The BBC reported that he had made several "gaffes" in his role as Shadow Chancellor and "in an interview he appeared not to know the rate of National Insurance paid by employers, and he was also reported to have clashed with his party leader over the policy of introducing a graduate tax to replace university tuition fees.[citation needed] He resigned as Shadow Chancellor on 20 January 2011 after three and a half months in the job, citing personal reasons.[38] He was replaced by Ed Balls.[39]

Johnson is campaigning for Britain to remain in the European Union in the 2016 referendum.[40]

Johnson has been married twice. His first marriage was to Judith Elizabeth Cox, with whom he has one son and two daughters.[1] After his divorce he married Laura Jane Patient in 1991, with whom he has a son born in 2000.[41] The couple divorced in February 2014.[42]

His memoir of childhood, This Boy: A Memoir of a Childhood, was published in 2013. It won the Royal Society of Literature Ondaatje Prize (2014),[44] and the Orwell Prize, Britain's top political writing award.[45]

His second volume of memoirs, Please, Mr Postman, was published in September 2014.[46] It won the Specsavers National Book Awards "Autobiography of the Year".[47]