Republicans hold two U.S. Senate seats and have held Alaska's At-large congressional district in the U.S. House of Representatives for over 40 years. The Alaska Republican Party has also greatly helped GOP presidential candidates in the state and has transformed the Last Frontier into one of the most staunchly Republican states in the nation. All Republican presidential nominees have won Alaska in recent elections; the last (and only) Democrat to carry Alaska was Lyndon B. Johnson in 1964.[2]

Republican John McCain won Alaska in 2008 with 59.42% of the total statewide vote over Democrat Barack Obama who received 37.89%, a 21.53-percent margin of victory for the senior U.S. Senator from Arizona.[3]

Alaska Republicans as a party organization can trace their origin to Alaska's first legislature in 1913.[5]

The 2014 Alaska Republican Party Platform is divided into 7 separate planks, and is prefaced with a mission statement and a statement of principles.

"The mission of the Alaska Republican Party is to promote the principles upon which our country and State were founded; advocate fiscally-sound, common sense solutions to the unique challenges facing Alaska; defend the family; and serve as Alaska's leading grassroots political organization. We also seek to elect and appoint to public office Alaskans with integrity committed to enacting solutions consistent with these principles."

"The United States of America and State of Alaska were founded on the fundamental principles of life, liberty and freedom. Governments must preserve individual freedom by protecting constitutional rights and observing their own constitutional limitations. Our country, people and constitutions must be honored, respected and defended. We are strengthened by family, faith, personal responsibility and accountability. We honor the sanctity of human life. Our national defense should be second to none. Our education system must be competitive, accessible and accountable at all levels. We support the primary right of parents to control and direct their children's education. Free enterprise is the best system to deliver economic opportunity. It should not be burdened by excessive governmental regulations. Wise stewardship of Alaska's resources supports responsible, environmentally-sound development. We expect ethical conduct, transparency and accountability from our elected and appointed officials."

Jobs and the economy

A. We believe in a strong, diversified economy based on the free market, low taxes, a balanced budget with responsible government spending. We support new business investment and responsible resource development in Alaska. We support reducing government laws and regulations.

B. We support a simplified tax system that taxes all citizens fairly, and does not have the effect of government redistribution of wealth.

C. The Alaska Republican Party supports repeal of the Sixteenth Amendment and replacing it with a tax system based on consumption in a free market.

D. We support Alaska as a right to work state, allowing equal access for all qualified contractors to all State- issued contracts.

E. We support expansion and improvement of Alaska's transportation infrastructure to encourage development and better access to more areas of the State.

A. We support the federal government living up to its contractual obligation under the Alaska Statehood Act.

B. We support and defend active management, access to, and reasonable incentives for the responsible development and utilization of Alaska's natural resources, as guaranteed in the Alaska Constitution—bringing natural resource decisionmaking back to Alaska.

C. We support the responsible development of onshore and offshore oil and gas resources and equitable sharing of federal offshore royalties with the state, for the maximum benefit of all Alaskans.

D. We support and defend access to Alaska's fish and game resources and their management on the sustained yield principle. We support subsistence harvesting and the rights of all Alaskans to hunt and fish.

E. We support the continued prohibition of farmed salmon and halibut.

F. We support the transfer of land into private ownership.

G. We support the use of alternative, sustainable energy sources such as geothermal, hydro, solar, tidal, and wind, when they are economically viable.

H. We support the rejection and repeal of reporting, taxation and regulation of carbon dioxide emissions.

I. We support limiting government regulation.

A. Alaska's students deserve access to a quality education, based on the principles of parental choice and sustainability with the objective of providing multiple education and career options for our youth.

B. We support competition, accountability and local control of public education, provided these do not limit parental choice.

C. We support active promotion of patriotism in our schools, the teaching of the historical Judeo-Christian foundation of our country, and of American and Alaska history, cultures and geography.

A. Man is made in the image of God; therefore, we embrace the sanctity of life from the moment of conception until natural death.

B. We affirm the family, defined as people living together related by blood, marriage or adoption, as the foundational unit of society. We embrace the definition of marriage in our State constitution as the union of one man and one woman and support reserving marriage benefits to this union alone.

C. We support policies that minimize government intervention and control of the family. Parents have primary responsibility for their children. They have the right and duty to appropriately discipline, and require active, informed prior consent for all medical care, including access to abortion, psychological testing and counseling.

D. Recognizing that Alaska law already protects all Alaskans, we oppose the insertion of "sexual orientation" and "transgender identity" in the list of protected classes under anti-discrimination laws for the State and its political subdivisions.

F. We emphatically support the repeal of the Affordable Care and Patient Act of 2010, better known as ObamaCare. We support health care reforms to address spiraling costs, quality, availability and number of uninsured people. Our solutions are consumer choice, personal responsibility, health savings accounts, reduction of unnecessary regulation, and limits on defensive medicine and liability costs through tort reforms.

A. We believe in a judicial system that supports a strict, literal interpretation of the United States and Alaska Constitutions and recognizes the sovereignty of our laws and state's rights without references to foreign precedent or authority.

B. We support capital punishment for heinous crimes. We further support strong mandatory minimum prison sentences for all persons, including minors, convicted of committing crimes with deadly weapons or force.

C. We support strong mandatory minimum penalties for all violent felony crimes, including sex offences. We support public registration of persons convicted of child molestation, and vigorous enforcement of laws to prohibit production, sale, and distribution of child pornography.

D. We support the principle that criminals, regardless of age, make restitution to their victims. We support sentencing convicted criminals to work as part of their obligation to provide restitution.

E. We support punishment proportionate to the crime and believe rehabilitation is a viable alternative to incarceration for non-violent crimes.

F. On the matter of jurisdiction, people of Alaska are exclusively subject to Federal Alaska Constitution, laws and courts.

A. We support peace through strength, believing that a strong military helps ensure a free United States. We support all who serve or have served our country and commit to support them and their families.

B. We support an active, aggressive war against those terrorists or other groups directly responsible for the planning and/or attacks on the United States, her citizens, or her interests.

D. We support the operation and further development of the Ground-based Midcourse Defense System in Alaska as part of a layered ballistic missile defense that protects all 50 states and Canada.

E. We strongly believe in the readiness of our homeland defense and recognize that every citizen has the responsibility to support and defend our liberties. We support securing our national borders as an essential component of our national defense.

F. We support developing, producing, deploying and using weapons and equipment advanced through active research and development so our military forces will be properly equipped and protected.

G. We believe compensation and conditions for our armed forces in place at the time military service is initiated should be sufficient to attract and retain quality men and women as we honor our promises and commitments to veterans, retirees, and their families. These shall continue and not be reduced or otherwise diminished while in service or upon separation or retirement.

H. No longer will the United States engage in foreign conflicts under the policy (rules of engagement) of "proportional response," but the policy of the U.S. in these conflicts shall be left to the discretion of the theater commander.

I. We oppose granting the same legal protections to non-U.S. citizens committing acts of war as are inherent to U.S. citizens.

J. We request the Department of Defense use existing world-class facilities, infrastructure, and workforce readily available in Alaska before expanding to other locations.

K. We support the immediate repeal of any or all portions of NDAA 2012 that are or may be in violation of the U.S. Constitution.

A. The right to life, liberty, and property is bestowed by our Creator. Every human being deserves protection under the law from the moment of conception until natural death. We support the right of due process before any execution or incarceration of U. S. citizens.

B. The Second Amendment to the U.S. Constitution guarantees the right of the people to keep and bear arms. The Alaska Constitution does the same, underscoring this as an individual right. We oppose federal, State, and local laws that infringe upon this right for law-abiding citizens, including registration or licensing of firearms or firearm owners.

C. The Ninth and Tenth Amendments to the U.S. Constitution reserve to the states and to the people all rights not expressly granted to the federal government. This reservation gives the State of Alaska sovereignty and management authority over all land, navigable waters and resources within its boundaries. We oppose all federal laws, regulations, mandates, actions, and executive orders that infringe on the rights reserved to the people and the states.

D. We support and defend equal access to development and utilization of natural resources for the maximum benefit of all Alaskans, as guaranteed in Alaska's constitution.

E. We support the state legislatures utilizing their Article V power to propose amendments to the U.S. Constitution in a convention of the states, limited to restoring federalism.

F. We support the preservation of private property rights, including the rights of owners to access their property.

H. We support the right of Alaska's citizens to own subsurface mineral rights. 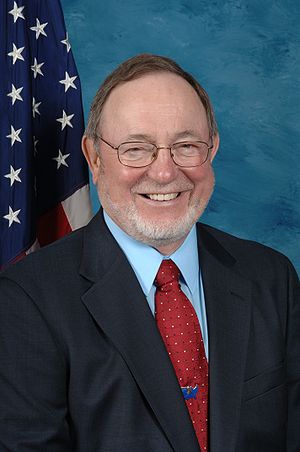 Don Young has served Alaska as a Republican since 1973.

Sarah Palin is one of Alaska's most recognizable Republicans. She was elected governor in 2006[10] and was John McCain's running-mate in the 2008 Presidential Election.[11]