The Albanian Armed Forces (Albanian: Forcat e Armatosura të Republikës së Shqipërisë (FARSH)) are the military of Albania and were formed after the declaration of independence in 1912. Today, it consists of: the General Staff, the Albanian Land Force, Albanian Air Force and the Albanian Naval Force.

According to the Albanian Constitution, the Albanian Armed Forces are charged to: protect the territorial integrity of the country, be present in areas incurring menace, assist the population in case of natural and industrial disasters and warn the dangers of military and non military nature, protect the constitutional order as it is determined by law and participate in international operations in composition of multinational forces.

On 4 December 1912, the Albanian Prime Minister, Ismail Qemali and his government, formed the Albanian National Army. Its first Chief in Command was Lieutenant Colonel Ali Shefqet Shkupi[9] By 1923, the Albanian Armed Forces fielded 10,691 active troops, including military police forces. At that time, Albania did not have a navy.[10]

In 1927, the Albanian Armed Forces numbered approximately 8.000. These troops were organized into three groups, based in Tirana, Shkodër to the north and Berat to the south. Each group was organized into three battalions of 500. A guards battalion of 350 was organized in Tirana. Four frontier battalions of mountaineers were held on reserve, as well as tanks and armored cars. Additionally, a cadet school, a machine-gun school, and a bombing school were housed in the capital. Italian involvement in the Albanian Armed Forces was significant, with an Italian Colonel attached to each of the three main troop groups and an Italian officer attached to each battalion and battery and to each medical, veterinary, and transportation unit. In 1927 alone, the Albanian military ordered 20,000 rifles, 40 mountain guns, 120 machine guns, and other supplies from Italy.[11]

Albanian soldiers in April 1939, during the Italian invasion of Albania.

The Royal Albanian Army (Albanian: Ushtria Mbretërore Shqiptare) was the army of King Zogu from 1928 until 1939. Its commander-in-chief was himself; its commander General Xhemal Aranitasi; its Chief of Staff was General Gustav von Myrdacz. The army was mainly financed by Italy.[12] On 7 April 1939, Italian troops invaded the country, and captured it in six days after fierce resistance by the overwhelmed Albanian army.

After the Second World War, Albania became a Soviet-aligned country. The ranks and the structure of the Albanian Armed Forces were organized based on the Soviet concepts, thus increasing the political control of the State-Party over the Armed Forces. One of the defining characteristics of civilian-military relations during this period was the effort of the civilian leadership to ensure the loyalty of the military to the communist system's values and institutions.

Like all other branches of the state, the military was subjugated to Communist Party control. All high-ranking military officers and most of the lower and middle ranks were members of the Communist Party—and had loyalties to it. The system was re-enforced by the establishment of Party cells within the military and extensive communist political education alongside soldiers’ military training, by the political commissars. To further increase its political control, the Albanian Communist Party enlarged the conscription system, thus enlisting in the Armed Forces personnel dedicated to the military career from the Albanian rural areas.

The State and Party went even further, starting from 1 May 1966, military ranks were abolished following the example of the Chinese People's Liberation Army, heavily influenced by Maoism during the years of the Cultural Revolution, and thus adopting strategic concepts related to forms of guerrilla war (Vietnam War doctrine). The military were still organized during this period into their basic structure forms, but the role of the military commander was insignificant with respect to the commanding role of the political commissars. In 1991 the rank system was reestablished under President Ramiz Alia.[13]

During all these years, Sigurimi which was the Albanian secret service during that period and was formed upon the KGB structure, was responsible for the execution, the imprisonment and deportation of more than 600 Officers from the Armed Forces, by completely neutralizing the Armed Forces ability to start a coup d'état. Initially the communist purge concentrated on the military personnel graduated by the Western Military Academies (mainly from Italy 1927–1939), extended later on to the officers graduated in Soviet Union (after the Albanian abandon of the Warsaw Pact in 1968). As the communist regime collapsed in Albania during 1990, there was a real fear that the armed forces might intervene to halt the collapse of communism by force. In the event, the armed forces stood by as the regime of which they had been a part disintegrated.

During the 1980s, Albania had reduced the number of infantry brigades from eight to four. It had shifted to fully manned units from its prior reliance on the mobilisation of reserve soldiers to flesh out a larger number of units manned at a lower level. Each brigade had three infantry battalions and one lightly equipped artillery battalion. Armoured forces consisted of one tank brigade. Artillery forces were increased from one to three regiments during the 1980s, and six battalions of coastal artillery were maintained at strategic points along the Adriatic Sea littoral.

An Albanian T-59 tank during the Albania-Yugoslav border incident in May 1999.

In 1992, the Library of Congress estimated that the ground forces had about 35,000 men, or about three-quarters of all armed forces personnel.[14] Because the strength of the ground forces was sufficient to man only about two divisions, brigades of approximately 3,000 soldiers became the largest army formation. In 1991 four infantry brigades constituted the bulk of combat units in the ground forces.

During the civilian riots in 1997, the political attempts by the government to use the Armed Forces to crush the rebellion were soon demonstrated to be a failure, following a total disintegration of the Armed Forces and the looting of the military facilities by the civilian population.[15]

Albania sheltered many thousands of Kosovar refugees during the 1999 conflict, and allowed NATO to provide logistical assistance for Kosovo Force (KFOR) troops through Communications Zone West headquartered in Durrës.[16] Albania was part of the International Stabilization Force (SFOR) serving in Bosnia (then EU mission ALTHEA), and Albanian peacekeepers are part of the International Security Assistance Force in Afghanistan, ISAF and the international stabilization force in Iraq. Albania has been a steadfast supporter of U.S. policy in Iraq, and one of only four nations to contribute troops to the combat phase of Operation Enduring Freedom.[17] Increasing the military budget was one of the most important conditions for NATO integration. Military spending has generally been lower than 1.5% since 1996 only to peak in 2009 at 2% and fall again to 1.5%.[18]

Albanian soldiers conduct a joint patrol with U.S. soldiers in Iraq on January 13, 2005.

There was an incident in 2002 in Albania where it was discovered, in a cluster of mountain bunkers, 16 tons[19] of primitive, undocumented chemical weapon agents that Albania had forgotten about.[20]

In December 2006, the Armed Forces adopted a new structure based on the Joint warfare concept. It had three main Commands: the Joint Forces Command, the Joint Support Command and the Training and Doctrine Command. The Albanian Joint Forces Command (AJFC) consists of the Rapid Reaction Brigade, the Commando Regiment, the Navy Brigade, the Air Brigade and the Area Support Brigade. The Albanian Joint Support Command provides support and logistical functions to all AAF units. The Albanian Training and Doctrine Command was established as the main educational and training provider for the Albanian Armed Forces. The final number of personnel will be 13,800 (including 2,000 civilians). However this new structure lasted a little more than 3 years and on April 2010 returned to its classic and current form.[21]

In March 2008 the problem of massive amounts of excess ammunition stockpiled in Albania became known to the public through the tragic consequences of the explosion of an ammunition depot (the 2008 Tirana explosions).[22]

The Albanian Navy performs mainly Coast Guard duties, and recently the Albanian parliament has approved some amendments to the articles of the actual Law on the Coast Guard in Albania, in order to improve the necessary legal framework due to efforts at European Union-NATO integration. Since February 2008, Albania participates officially in NATO's Operation Active Endeavor in the Mediterranean.[23] Albania became a full member of the North Atlantic Treaty Organization on 1 April 2009.[24] It hosts an international fair on security and defense called the Albanian Military Exhibition (ALMEX) where different security industries can present their products and services for the regional market.[25]

After several major re-equipment programs, in 2001 the Albanian Armed Forces launched a 10-year reform program to become technologically advanced and fully professional by 2011. The new armed forces consists of about 14,500 troops including 2,000 civilians, trained to NATO standards.[26] The same radical reform is being implemented on surplus equipment, including airplanes, tanks, helicopters, artillery equipment, navy vessels, SALW and ammunition. Albania started an ambitious destruction program. However, Albania is still dealing with a huge amount of surplus and obsolete ammunition, a direct result of the country's long isolation and ethnic tensions in the area. The Albanian Ministry of Defense estimates such quantity up to 85,000 tons, but it is expected to increase up to 104,000 tons due to the ongoing downsizing process of the AAF.

In 2004 U.S. President George W. Bush authorized the use of Nunn-Lugar Cooperative Threat Reduction program funds for projects in Albania, marking the first time such funds were authorized for use outside the former Soviet Union. With this funding the U.S. assisted the Government of Albania with the destruction of a stockpile of chemical warfare agents left over from the communist regime (Category 1, Total amount 16.7 tons).[27] The final cost of the project was US$48 million and was officially completed on 10 July 2007.

Albania has recently acquired 4 Eurocopter AS532 Cougar helicopters and has 2 more EC 145 on order as of 2015. Also, since 2008 four Damen Stan 4207 patrol vessels have been commissioned in the Navy, 3 of them have been constructed in Albania.

On 16 July 2014, The Albanian Defense Minister declared that within 2014 the Albanian Motorized Infantry Battalion will be fully combat ready and also equipped with modern NATO equipment. This will be the first unit in the Albanian Armed Forces to not have the AK 47 in its inventory. Instead the M4 carbine will act as its standard battle rifle.[29] 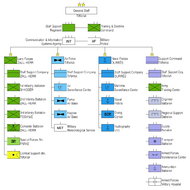 Structure of the Albanian Armed Forces (click to enlarge)