The Albanian Byzantine Catholic Church is an autonomous (in Latin, sui iuris) Byzantine Rite particular Church in communion with Rome, whose members live in Albania. It is not to be confused with the Italo-Albanian Catholic Church. 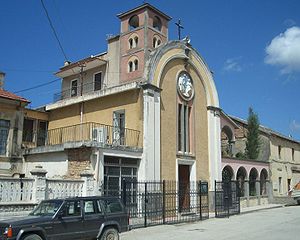 The conversion to Christianity of Albania took place under Latin influence in the north, under Greek in the south, and Christianity was the first and the oldest monotheistic religion of Albanian people. After the fifteenth-century Turkish conquest, some two thirds of the population accepted Islam. In 1967, Communist-ruled Albania was officially declared an atheist state.

Though the Greek liturgical rite was used in many of its churches, Albania was part of the patriarchate of Rome until 731, when Byzantine Emperor Leo III, in reprisal for the opposition of Pope Saint Gregory III to the emperor's iconoclast policy, attached the whole of eastern Illyricum to the patriarchate of Constantinople.

Catholics, of Latin Rite, were long established in the north of the country. A Catholic mission worked in the south between 1660, when the Orthodox Archbishop joined the Catholic Church, to 1765, when the effort was abandoned because of obstacles placed by the Turkish rulers. In 1895 a group of villages in Mali Shpati, southeast of Elbasan in central Albania, decided to become Catholic and demanded a Catholic bishop of their own rite, a proposal to which the consular representatives of Russia and Montenegro raised objections with the civil authorities. At about the same time, another group of Greek-Catholics arose, centred on an archimandrite who was a nephew of the Orthodox metropolitan. Numbers grew only to a small extent, but enough for southern Albania to become in 1939 a separate ecclesiastical jurisdiction in the care of an Apostolic Administrator. However, after less than seven years, the Administrator was expelled, and contact seemed lost with the Byzantine faithful, who found themselves under strict Communist rule.

Only in 1992 was it possible to appoint a new Apostolic Administrator. At first the post was given to the Holy See's diplomatic representative in Tirana, Archbishop Ivan Dias, who later became Archbishop of Mumbai and a cardinal. Archbishop Dias's successor as Apostolic Administrator of Southern Albania, not as Nuncio, is the Croatian-born Byzantine-Rite Franciscan Bishop Hil Kabashi, who was appointed in 1996.

The Apostolic Administratorship of Southern Albania has 3,200 Catholics in 9 parishes, with 11 churches, and is served by 4 diocesan and 10 religious priests, 10 male and 97 female religious, who administer 10 schools and 20 charitable institutions. The great majority of these are of Latin, not Byzantine, Rite.