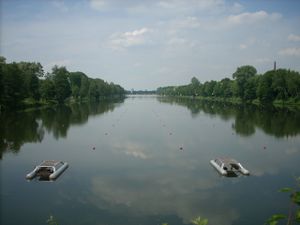 The Albano lane system in use at Duisburg regatta course.

The Albano lane system is a method of marking kayak, canoe and rowing race courses using lines of buoys. It was first used internationally in the 1960 Summer Olympic Games held on Lake Albano, Italy. It has since become an international standard for most FISA events and is used in Olympic rowing events.

The marked course is typically straight and 2000 metres long. The buoy system is usually six adjacent 13.5 metre-wide lanes made of 7 lines of small, spherical buoys 10 or 15 metres apart. The buoys are red for the first and last 100 metres, the rest being white.[1] The six lanes are for racing and there may also be a separate channel for boats moving from the end of the course to the start line (the up channel). Some courses have as many as 8 racing lanes.[2] Distances along the course are marked at intervals, usually every 250 metres, with prominent numbered signs.

The lane buoys remain in place in most water and weather conditions due to longitudinal wires that are suspended from the buoys at a depth of about 1.5 metres. Depending on local conditions, cross links between the longitudinal wires are attached every 500 metres along the course.[3] The system is anchored at intervals and tensioned with weights. This allows the entire system to ride up and down with varying water levels.