The Albatros D.II was a German fighter aircraft used during World War I. After a successful combat career in the early Jagdstaffeln, it was gradually superseded by the Albatros D.III.

Albatros designers Thelen, Schubert and Gnädig produced the D.II in response to pilot complaints about poor upward vision in the Albatros D.I. The solution was to reposition the upper wing 36 cm (14 in) closer to the fuselage and stagger it forward slightly. Rearrangement of the cabane struts also improved forward view. The D.II otherwise retained the same fuselage, engine installation and armament as the D.I.[1] Basic performance was unchanged. The Idflieg (Inspektion der Fliegertruppen - Inspectorate of Flying Troops), ordered an initial batch of 100 D.II aircraft in August 1916.

In November 1916, Idflieg banned Windhoff "ear" radiators in operational aircraft because they were at a lower level than the crankcase of the engine they were cooling, and a shot into either radiator was likely to drain the cooling system. Late production D.IIs switched to using a Teves und Braun "airfoil shape" radiator (the Teves company still exists in the 21st century), in the center section of the upper wing. This also proved to be a problematic as a leaking or battle damaged radiator could scald the pilot's face. On later Albatros fighters (late models of the D.III, and the D.V) the radiator was moved to the right of the centre section to alleviate this problem. 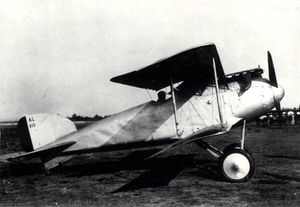 Albatros built 200 D.II aircraft. LVG (Luft-Verkehrs-Gesellschaft) produced another 75 under license. Service numbers peaked in January 1917, when 214 machines were in service. The D.II operated well into 1917. As late as 30 June 1917, 72 aircraft were in the frontline inventory, and even in November 11 D.IIs and 9 D.Is were still in service, alongside the by now far more numerous D.IIIs and D.Vs.[2]

Oeffag (Oesterreichische Flugzeugfabrik AG) also built the D.II under license, as the Oeffag Va.53 / Oeffag series 53, for the Luftfahrtruppen. The Austrian machines used a 138 kW (185 hp) Austro-Daimler engine, and were fitted with a Teves und Braun-style wing mounted radiator. Oeffag produced only 16 examples before production shifted to the Albatros D.III.

Manfred von Richthofen was flying an Albatros DII on 23 November 1916 when he was engaged in a prolonged dogfight with the RFC's Lanoe Hawker VC. Hawker's DH.2 pusher engined fighter had a better turning circle but the Albatros DII had twin guns, was faster and could maintain height in a turn better. After firing some 900 rounds von Richthofen shot Hawker in the head and killed him. Hawker's machine crashed and von Richthofen claimed Hawker's Lewis gun for his growing collection of trophies.

Template:World War I Aircraft of the Central Powers