Alberobello (Italian: [ˌalberoˈbɛllo]; literally "beautiful tree") is a small town and comune of the Metropolitan City of Bari, Apulia, southern Italy. It has about 11,000 inhabitants and is famous for its unique trulli buildings. The Trulli of Alberobello have been designated as a UNESCO World Heritage site since 1996. 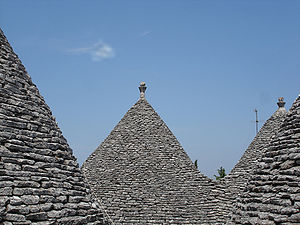 The roofs of Alberobello's trulli

Alberobello was first mentioned in the early sixteenth century when the first 40 families got land to farm in the area. The abundance of calcareous sedimentary material in the area lead to the building of houses with dry stone without the use of mortar. These houses were the first trulli which contributed to the expansion of the settlement. Building the houses of dry stone was a requirement of Count Giangirolamo II as this way it was avoidable to pay taxes on them. Alberobello was feud of the Acquaviva of Aragon until May 27, 1797, when King Ferdinand IV of Bourbon received Alberobello and issued a decree that elevated the small village to a royal city, freeing them from feudal serfdom.

Alberobello is twinned with: