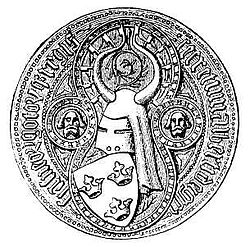 Royal Seal of Albert of Sweden

He was the second son of Duke Albert II of Mecklenburg and Euphemia Eriksdotter, the daughter of duke Erik Magnusson of Södermanland and the sister of King Magnus IV of Sweden. He married Richardis of Schwerin, daughter of count Otto of Schwerin; she died in 1377 and is today buried in Stockholm.[1]

In 1384 he inherited the ducal title of Mecklenburg and united it with Sweden in a personal union. Albert based his claims on the Swedish crown upon two family ties with the Swedish House of Sverker, both through Albert's mother, through whom he was granted the first place in the Swedish succession order, and through Kristina Sverkersdotter, a daughter of Sverker II of Sweden, also known as Sverker the Young. Sverker II had been the king of Sweden between 1196 and 1208.

In 1363, members of the Swedish Council of Aristocracy, led by Bo Jonsson Grip, arrived in the court of Mecklenburg. They had been banished from the country after a revolt against king Magnus Eriksson, who was unpopular among the nobility. At the nobles' request, Albert launched an invasion of Sweden supported by several German dukes and counts. Several Hanseatic cities and dukes in Northern Germany expressed support of the new king. Stockholm and Kalmar, with large Hanseatic populations, and also welcomed the intervention.

Albert was proclaimed King of Sweden and officially crowned on 18 February 1364. The coronation took place at the Stones of Mora. A fragment still remains of the stone commemorating the occasion, the Three Crowns stone. This is the earliest known example of the use of the three crowns as a national symbol for Sweden.

The arrival of Albert led to eight years of civil war in Sweden between Albert's and Magnus' supporters. In a battle near Enköping in 1365 between Albert's German forces and king Magnus Eriksson's forces, supported by king Haakon VI of Norway (Magnus' son), Magnus was defeated and taken prisoner by Albert. After the initial defeat, Valdemar IV of Denmark intervened on Magnus and Haakon's behalf, and Valdemar's forces were joined by Swedish peasants who supported Magnus. Apart from German strongholds like Stockholm, Albert was unpopular among Swedes who were discontent with Albert's policy of appointing Germans as officials in all the Swedish provinces.

With the help of Danish and Swedish allies, Haakon managed to temporarily beat back Albert and lay siege to Stockholm in 1371. However, the siege was short-lived; with military help from the Swedish nobility in Stockholm, Albert was able beat back the Norwegians and the Danes. A peace agreement was signed, with the condition that Magnus be released and allowed to freely travel back to Norway (where he spent the rest of his life). Albert had secured the Swedish crown, but was also forced to make a belated coronation oath in which he agreed to extensive concessions to the Swedish nobility in the regency council. Bo Jonsson (Grip) used this power to personally usurp 1,500 farms and he soon became Sweden's largest landowner, controlling a third of the entirety of the Swedish territory and possessing the largest non-royal wealth in the country. 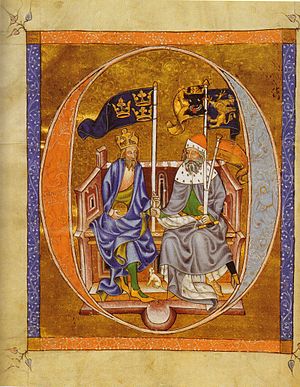 Albert kept the crown of Sweden for another 19 years, but most of western Sweden did not support his reign. However, it was only when he attempted to introduce reduction of the large estates of the Swedish nobility that he lost his support in Stockholm. In 1389, facing a loss of landholdings and wealth, the Swedish regency council turned to Margaret I of Denmark to plead for help in getting rid of Albert. Margaret sent troops and in February 1389, the Danes defeated Albert at the Battle of Åsle (slaget vid Åsle). Albert was captured, deposed and sent to Lindholmen Castle in Scania, where he spent the next six years imprisoned. He was released after 16 days of peace negotiations in 1395, during which he agreed to either give up Stockholm within three years, or pay large sums in retribution to Margaret. When the three years were up, Albert chose to give up Stockholm rather than pay the fine, and in 1398 the agreement came into force, granting Margaret possession of Stockholm.

Albert died in 1412 and is buried in the monastery of Doberan, Mecklenburg.

In 1359 Albert married Richardis of Schwerin in a marriage contracted in Wismar on 12 October 1352. The King and Queen had two children: