Albert Abraham Michelson (surname pronunciation anglicized as "Michael-son", December 19, 1852 – May 9, 1931) was an American physicist known for his work on the measurement of the speed of light and especially for the Michelson–Morley experiment. In 1907 he received the Nobel Prize in Physics. He became the first American to receive the Nobel Prize in sciences.

Michelson was born in Strzelno, Province of Posen in the Prussian Partition (sometimes called the Prussian Poland), the former territories of the Polish–Lithuanian Commonwealth (now and before, Poland) into a Jewish family.[2] He moved to the US with his parents in 1855, at the age of two. He grew up in the mining towns of Murphy's Camp, California and Virginia City, Nevada, where his father was a merchant. His family was Jewish by birth but non-religious, and Michelson himself was a lifelong agnostic.[3][4][5] He spent his high school years in San Francisco in the home of his aunt, Henriette Levy (née Michelson), who was the mother of author Harriet Lane Levy.[6]

President Ulysses S. Grant awarded Michelson a special appointment to the U.S. Naval Academy in 1869.[7] During his four years as a midshipman at the Academy, Michelson excelled in optics, heat, climatology and drawing. After graduating in 1873 and two years at sea, he returned to the Naval Academy in 1875 to become an instructor in physics and chemistry until 1879. In 1879, he was posted to the Nautical Almanac Office, Washington (part of the United States Naval Observatory[8][9][10]), to work with Simon Newcomb. In the following year he obtained leave of absence to continue his studies in Europe. He visited the Universities of Berlin and Heidelberg, and the Collège de France and École Polytechnique in Paris.

In 1877, he married Margaret Hemingway, daughter of a wealthy New York stockbroker and lawyer. They had two sons and a daughter.[11]

Michelson was fascinated with the sciences, and the problem of measuring the speed of light in particular. While at Annapolis, he conducted his first experiments of the speed of light, as part of a class demonstration in 1877. His Annapolis experiment was refined, and in 1879, he measured the speed of light in air to be 299,864 ± 51 kilometres per second, and estimated the speed of light in vacuum as 299,940 km/s, or 186,380 mi/s.[12][13][14] After two years of studies in Europe, he resigned from the Navy in 1881. In 1883 he accepted a position as professor of physics at the Case School of Applied Science in Cleveland, Ohio and concentrated on developing an improved interferometer. In 1887 he and Edward Morley carried out the famous Michelson–Morley experiment which seemed to rule out the existence of the aether. He later moved on to use astronomical interferometers in the measurement of stellar diameters and in measuring the separations of binary stars.

In 1889 Michelson became a professor at Clark University at Worcester, Massachusetts and in 1892 was appointed professor and the first head of the department of physics at the newly organized University of Chicago.

In 1899, he married Edna Stanton. They raised one son and three daughters.

In 1907, Michelson had the honor of being the first American to receive a Nobel Prize in Physics "for his optical precision instruments and the spectroscopic and metrological investigations carried out with their aid". He also won the Copley Medal in 1907, the Henry Draper Medal in 1916 and the Gold Medal of the Royal Astronomical Society in 1923. A crater on the Moon is named after him.

Michelson died in Pasadena, California at the age of 78. The University of Chicago Residence Halls remembered Michelson and his achievements by dedicating 'Michelson House' in his honor. Case Western Reserve has dedicated a Michelson House to him, and Michelson Hall (an academic building of science classrooms, laboratories and offices) at the United States Naval Academy also bears his name. Clark University named a theatre after him.[15] Michelson Laboratory at Naval Air Weapons Station China Lake in Ridgecrest, California is named for him. There is a display in the publicly accessible area of the Lab which includes facsimiles of Michelson's Nobel Prize medal, the prize document, and examples of his diffraction gratings. 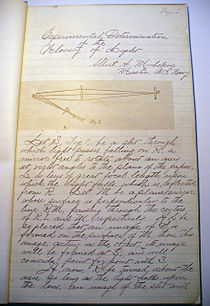 As early as 1869, while still serving as an officer in the United States Navy, Michelson started planning a refinement of the rotating-mirror method of Léon Foucault for measuring the speed of light, using improved optics and a longer baseline. He conducted some preliminary measurements using largely improvised equipment in 1878, about the same time that his work came to the attention of Simon Newcomb, director of the Nautical Almanac Office who was already advanced in planning his own study. Michelson published his result of 299,910 ± 50 km/s in 1879 before joining Newcomb in Washington DC to assist with his measurements there. Thus began a long professional collaboration and friendship between the two.

Simon Newcomb, with his more adequately funded project, obtained a value of 299,860 ± 30 km/s, just at the extreme edge of consistency with Michelson's. Michelson continued to "refine" his method and in 1883 published a measurement of 299,853 ± 60 km/s, rather closer to that of his mentor. 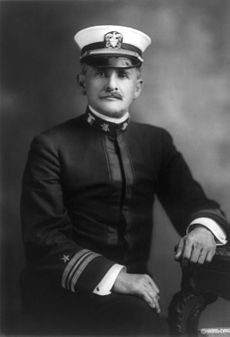 Lt. Cmdr. Albert A. Michelson while serving in the U.S. Navy. He rejoined the U.S. Navy in World War I,[16] when this portrait was taken.

In 1906, a novel electrical method was used by E. B. Rosa and N. E. Dorsey of the National Bureau of Standards to obtain a value for the speed of light of 299,781 ± 10 km/s. Though this result has subsequently been shown to be severely biased by the poor electrical standards in use at the time, it seems to have set a fashion for rather lower measured values.

From 1920, Michelson started planning a definitive measurement from the Mount Wilson Observatory, using a baseline to Lookout Mountain, a prominent bump on the south ridge of Mount San Antonio ("Old Baldy"), some 22 miles distant.

In 1922, the U.S. Coast and Geodetic Survey began two years of painstaking measurement of the baseline using the recently available invar tapes. With the baseline length established in 1924, measurements were carried out over the next two years to obtain the published value of 299,796 ± 4 km/s.[17]

Famous as the measurement is, it was beset by problems, not least of which was the haze created by the smoke from forest fires which blurred the mirror image. It is also probable that the intensively detailed work of the geodetic survey, with an estimated error of less than one part in 1 million, was compromised by a shift in the baseline arising from the Santa Barbara earthquake of June 29, 1925, which was an estimated magnitude of 6.3 on the Richter scale.

The period after 1927 marked the advent of new measurements of the speed of light using novel electro-optic devices, all substantially lower than Michelson's 1926 value.

Michelson sought another measurement, but this time in an evacuated tube to avoid difficulties in interpreting the image owing to atmospheric effects. In 1930, he began a collaboration with Francis G. Pease and Fred Pearson to perform a measurement in a 1.6 km tube at Pasadena, California. Michelson died with only 36 of the 233 measurement series completed and the experiment was subsequently beset by geological instability and condensation problems before the result of 299,774 ± 11 km/s, consistent with the prevailing electro-optic values, was published posthumously in 1935.

In 1887 he collaborated with colleague Edward Williams Morley of Western Reserve University, now part of Case Western Reserve University, in the Michelson–Morley experiment. Their experiment for the expected motion of the Earth relative to the aether, the hypothetical medium in which light was supposed to travel, resulted in a null result. Surprised, Michelson repeated the experiment with greater and greater precision over the next years, but continued to find no ability to measure the aether. The Michelson-Morley results were immensely influential in the physics community, leading Hendrik Lorentz to devise his now-famous Lorentz contraction equations as a means of explaining the null result.

There has been some historical controversy over whether Albert Einstein was aware of the Michelson–Morley results when he developed his theory of special relativity, which pronounced the aether to be "superfluous." In a later interview, Einstein said of the Michelson–Morley experiment, "I was not conscious it had influenced me directly... I guess I just took it for granted that it was true."[18] Regardless of Einstein's specific knowledge, the experiment is today considered the canonical experiment in regards to showing the lack of a detectable aether.[19][20]

From 1920 and into 1921 Michelson and Francis G. Pease became the first individuals to measure the diameter of a star other than the Sun. They used an astronomical interferometer at the Mount Wilson Observatory to measure the diameter of the super-giant star Betelgeuse. A periscope arrangement was used to obtain a densified pupil in the interferometer, a method later investigated in detail by Antoine Émile Henry Labeyrie for use in "Hypertelescopes". The measurement of stellar diameters and the separations of binary stars took up an increasing amount of Michelson's life after this.

A century later, the specific interferometer instrumentation design produced by Albert Michelson has become the principal means to conduct astronomical interferometry. The "Michelson Interferometer" design is found on modern operational observatories such as VLTI, CHARA and the U.S. Navy's NPOI.

In an episode of the television series Bonanza ("Look to the Stars", broadcast March 18, 1962), Ben Cartwright (Lorne Greene) helps the 16-year-old Michelson (portrayed by 25-year-old Douglas Lambert (1936–1986)) obtain an appointment to the U.S. Naval Academy, despite the opposition of the bigoted town schoolteacher (played by William Schallert). Bonanza was set in and around Virginia City, Nevada, where Michelson lived with his parents prior to leaving for the Naval Academy. In a voice-over at the end of the episode, Greene mentions Michelson's 1907 Nobel Prize.

The home in which Michelson lived as a child in Murphys Camp, California is now a tasting room for Hovey Wine.

New Beast Theater Works in collaboration with High Concept Laboratories produced a 'semi-opera' about Michelson, his obsessive working style and its effect on his family life. The production ran from February 11 to February 26, 2011 in Chicago at The Building Stage. Michelson was portrayed by Jon Stutzman. The play was directed by David Maral with music composed by Joshua Dumas.[citation needed]

Norman Fitzroy Maclean wrote an essay "Billiards is a Good Game"; published in The Norman Maclean Reader (ed. O. Alan Weltzien, 2008), it is an appreciation of Michelson from Maclean's vantage point as a graduate student regularly watching him play billiards. 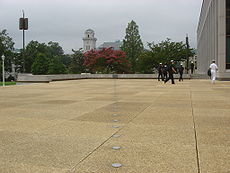 A monument at United States Naval Academy marks the path of Michelson's experiments measuring the speed of light.

Michelson was a member of the Royal Society, the National Academy of Sciences, the American Physical Society and the American Association for the Advancement of Science.

The Computer Measurement Group gives an annual A. A. Michelson Award.