Albert I, Prince of Monaco

Albert I (13 November 1848 – 26 June 1922) was Prince of Monaco and Duke of Valentinois from 10 September 1889 until his death. He devoted much of his life to oceanography. Alongside his expeditions, Albert I made reforms on political, economic and social levels, bestowing a constitution on the Principality in 1911.

As a young man, Prince Albert served in the Spanish Navy, during the Franco-Prussian War, he joined the French Navy where he was awarded the Legion of Honor. In addition to his interest in oceanographic studies, Albert had a keen interest in the origins of man and in Paris, he founded the "Institute for Human Paleontology" that was responsible for a number of archeological digs. The "Grimaldi Man" found in the Baousse-Rousse cave was named in his honour. Albert's intellectual achievements gained him worldwide recognition and in 1909, the British Academy of Science made him a member.

File:Albert1Monaco HamiltonMary.png
Prince Albert with his first wife shortly after their wedding

On 21 September 1869 at the Château de Marchais (which is still in the possession of the Grimaldi family today) in Champagne, Prince Albert was married to Lady Mary Victoria Hamilton (1850–1922), of Lanarkshire, Scotland, a daughter of the 11th Duke of Hamilton and his wife, Princess Marie of Baden. The couple met for the first time in August 1869 at a ball hosted by the Emperor and Empress of France; their marriage had been arranged by Albert's grandmother Caroline.

Caroline had tried to make a match between Albert and Princess Mary Adelaide of Cambridge, the first cousin of Queen Victoria, and sought the help of Napoléon III (Louis-Napoléon Bonaparte) and his wife, Empress Eugénie. The Emperor convinced Caroline that Queen Victoria would never allow a relative of hers to marry into a family who were making a living out of gambling. He then suggested Mary, his third cousin and sister of his good friend, the 12th Duke of Hamilton, as a suitable alternative. Mary was not royalty, but the Hamiltons, the premier ducal house of Scotland, were seen as noble, ancient and rich enough for a marriage with any royal house in Europe. She was a granddaughter of the rich Charles, Grand Duke of Baden and related by blood to the French Imperial family through her maternal grandmother Stéphanie de Beauharnais, Emperor Napoléon I's adopted daughter and second cousin of Napoléon III's mother, Hortense de Beauharnais.[1] The Hamiltons were well-aware of the extent of Monaco's estate, which was no bigger than theirs, but were sufficiently impressed by its status as an independent state. The couple married at Château de Marchais on 21 September 1869.

Within a year of their marriage, the couple's only child (Louis) was born, but Mary, from the hills of Scotland, disliked Monaco and everything Mediterranean. While Albert was away fighting in the Franco-Prussian war, she left Monaco permanently. The couple divorced and their marriage was annulled by the Church on 3 January 1880, although a special provision was made by the Vatican to allow Louis to remain legitimate in the eyes of the Church. Civilly, the marriage was dissolved on 28 July 1880 by the Order of Prince Charles III. That same year, the former Princess of Monaco remarried in Florence, Italy, to a Hungarian nobleman, Prince Tassilo Festetics von Tolna. 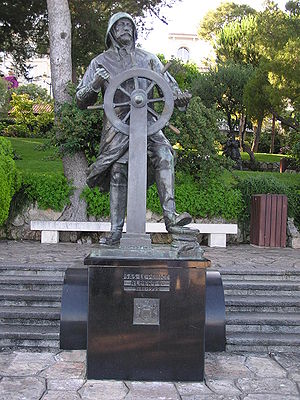 A statue of Albert as a seafarer in Monaco-Ville's St Martin Gardens.

On 10 September 1889, Albert ascended the throne of Monaco on the death of his father. That same year in Paris, on 30 October, he married the Dowager Duchess de Richelieu, née Marie Alice Heine (1858–1925). The American daughter of a New Orleans building contractor of German-Jewish descent, Alice Heine had married the Duc de Richelieu but had been widowed by age 21 and left with a young son, Armand. Her marriage to Prince Albert proved an equal blessing for him and the tiny principality of Monaco, since Alice brought a strong business acumen, well in advance of her youth. Having helped put her husband's principality on a sound financial footing, she would devote her energies to making Monaco one of Europe's great cultural centers, with an opera, theater, and a ballet under the direction of the famed Russian impresario Serge Diaghilev.

Despite the initial success of the marriage of Prince Albert and Princess Alice, in 1902, they separated legally, without issue, though did not divorce. According to Anne Edwards' book The Grimaldis of Monaco, this was due to the Princess's friendship with the composer Isidore de Lara. By the same token, the courtesan Caroline Otero, La Belle Otero, who had served him as a high class prostitute between 1893 and 1897, recalled Albert fondly in her memoirs and claimed that he was not a virile man and suffered from erection difficulty. Princess Alice had La Belle Otero banned from the province in 1897 for being seen with her husband.

In March 1910, there were mass protests against his rule. The Monegasque demanded a constitution and a parliament to rein in the absolute monarch or else they would overthrow him and establish a republic. They were dissatisfied about French domination of the principality's politics and economy. There was severe unemployment as the country lacked factories and farmland and the casinos did not allow citizens to work there. On 5 January 1911, Prince Albert I granted Monaco a constitution, but the document had little real meaning in terms of reducing autocratic rule and was soon suspended by the Prince when World War I broke out. Also in 1911, Prince Albert created the Monte Carlo Rally, an automobile race designed to draw tourists to Monaco and the Casino.

Despite his military service, or perhaps because of it, the Prince became a pacifist, establishing the International Institute of Peace in Monaco as a place to develop a peaceful settlement for conflict through arbitration. In the tension-filled times leading up to World War I, Prince Albert made numerous attempts to dissuade Germany's Kaiser Wilhelm II from war.

When war came, Prince Albert could not avoid becoming involved. In one incident, he even wrote personally to the Kaiser in an effort to ameliorate the consequences of Gen. Karl von Bülow's wrath. Without the Prince's intervention, the French villages of Sissonne and Marchais would have been destroyed.[2] In the "Great War to End All Wars," Monaco declared its neutrality, but in fact, provided the Allied forces with hospitals, convalescent centers, and soldiers, including Prince Albert's only son, Louis.

Prince Albert I of Monaco died on 26 June 1922 in Paris, France and was succeeded by his son, Louis II.

Prince Albert I of Monaco devoted much of his life to the study of the sea and oceans. At only 22 years old, he embarked on a career in the then relatively new science of oceanography. Understanding the importance of the relationship between living creatures and their environment, he devised a number of techniques and instruments for measurement and exploration. Albert I was also the “instigator and promulgator” of the oceanographic science he contributed to create. He founded the Oceanographic Institute Foundation Albert I, Prince of Monaco is a private foundation recognized of public utility, established in 1906. It has two buildings: The Oceanographic Institute of Paris, now renamed Ocean House. and what became the world-renowned Oceanographic Museum of Monaco.[3] This includes an aquarium, a museum, and a library, with research facilities in Paris. 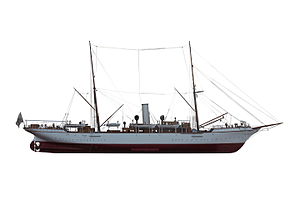 Scale model of Hirondelle II. On display at the Oceanographic Museum.

He owned four, increasingly impressive research yachts, Hirondelle, Princesse Alice, Princesse Alice II and Hirondelle II.[4] Accompanied by some of the world's leading marine scientists, he travelled the length and breadth of the Mediterranean,[5] recording numerous oceanographic studies, maps and charts. In 1896, on an oceanographic survey of the Azores, he discovered the Princess Alice Bank. 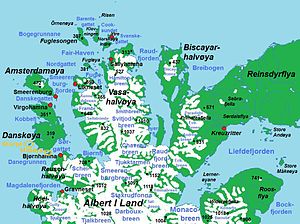 Map of the northern part of Albert I Land.

From an early age, Prince Albert I of Monaco evidenced a strong fascination for the polar regions. In the years 1898-1907 he made four scientific cruises to Svalbard on his yacht Princesse Alice. His efforts are honored by the later naming of Albert I Land on Spitsbergen.

The first cruise in the summer of 1898 was an oceanographical and zoological reconnaissance, aimed mainly at adding to the collections of the Oceanographic Museum of Monaco, for which the construction had just started.

The second expedition, in 1899, the focus was on the hydrography and topography of Raudfjorden, on the north-western tip of Spitsbergen, of which a map was published. His efforts are acknowledged by the later naming of Albert I Land, which comprises the part of Spitsbergen west of Raudfjorden.

The third trip, in 1906, meteorology was added to the range of observations and surveys were pursued. The Prince also provided support for two other expeditions, that of the Scotsman, William Bruce, to Prins Karls Forland, and that of the Norwegian, Gunnar Isachsen, to northwestern Spitsbergen. His funding of the latter lead to regular Norwegian scientific expeditions on Svalbard, and in 1928 the foundation of the Norwegian Polar Institute.

The Prince's fourth expedition in 1907, was aimed at completing the results from the previous summer. Prince Albert also lent his support, either financially, or through gifts or loans of oceanographic instruments, to numerous Arctic and Antarctic explorers. Finally, he showed a keen interest in environmental protection, especially in Svalbard. This is demonstrated by his responses to a questionnaire that Hugo Conwentz, a German botanist sent him in 1912.

In 1918, the US National Academy of Sciences awarded Prince Albert its Alexander Agassiz Medal for his achievements. The Explorers Club elected Albert I to its highest category of membership — Honorary Member — in 1921. He was also awarded the Cullum Geographical Medal of the American Geographical Society. Prince Rainier of Monaco and the International Association for the Physical Sciences of the Oceans established the Prince Albert I Medal in the physical and chemical sciences of the oceans in his honor.

Albert I constituted a collection of postage stamps that was later continued by Louis II and finally remain part of the postal museum Rainier III created in 1950.