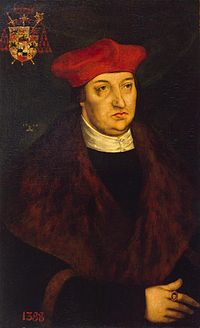 Albert of Mainz, painted by Lucas Cranach the Elder in 1526

Born in Kölln, Albert was the younger son of John Cicero, Elector of Brandenburg and Margaret of Thuringia.

After their father's death, Albert and his older brother Joachim I Nestor became margraves of Brandenburg in 1499, but only his older brother held the title of an elector of Brandenburg. Having studied at the university of Frankfurt (Oder), Albert entered the ecclesiastical profession, and in 1513 became archbishop of Magdeburg at the age of 23 and administrator of the Diocese of Halberstadt.

In 1514 he obtained the Electorate of Mainz, and in 1518 was made a cardinal at the age of 28. To pay for the pallium of the see of Mainz and to discharge the other expenses of his elevation, Albert had borrowed 21,000 ducats from Jakob Fugger, [Fugger article says 48,000 ducats] and had obtained permission from Pope Leo X to conduct the sale of indulgences in his diocese to obtain funds to repay this loan, as long as half of the collection was forwarded to the Papacy. An agent of the Fuggers subsequently traveled in the Cardinal's retinue in charge of the cashbox. He procured the services of John Tetzel to sell the indulgences.

This so infuriated Martin Luther that he was driven to write his famous 95 Theses which led to the Reformation. Luther sent these to Albert on 31 October 1517 and according to tradition nailed them to the door of Castle Church in Wittenberg. Albert forwarded the theses to Rome, suspecting them of heresy. When the imperial election of 1519 drew near, the elector's vote was eagerly solicited by the partisans of soon to be Charles V and by those of Francis I, King of France, and Albert appears to have received a large amount of money for his vote, which he cast eventually for Charles. 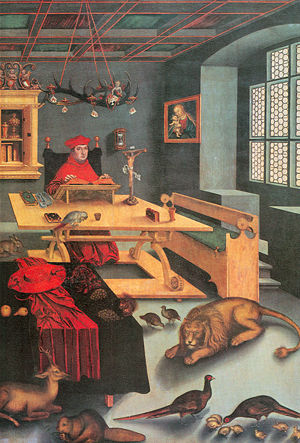 Cardinal Albert, Archbishop of Mainz, by Lucas Cranach the Elder, 1526

Albert's large and liberal ideas, his friendship with Ulrich von Hutten, and his political ambitions, appear to have raised hopes that he could be won over to Protestantism; but after the German Peasants' War of 1525 he ranged himself definitely among the supporters of Catholicism, and was among the princes who met at Dessau in July 1525.

Cardinal Albert needed a prestigious church that met his expectations at a central location in his Residenz town. Albert feared for his peace of mind in heaven, and collected more than 8,100 relics and 42 holy skeletons which needed to be stored. These precious treasures known as "Hallesches Heilthum" and indirectly related to the sale of indulgences had triggered the Reformation a few years before. Then the cardinal and the Roman Catholic members of the town council wanted to repress the growing influence of the Reformation by holding far grander masses and services in a new church dedicated solely to Saint Mary. 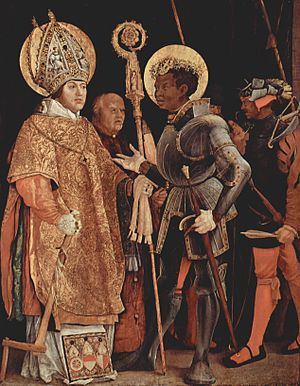 Meeting of Saint Erasmus of Formiae and Saint Maurice, by Matthias Grünewald, between 1517 and 1523. Grünewald used Albert of Mainz, who commissioned the painting, as the model for St. Erasmus (left).

His hostility towards the reformers, however, was not so extreme as that of his brother Joachim I, Elector of Brandenburg; and he appears to have exerted himself towards peace, although he was a member of the League of Nuremberg, formed in 1538 as a counterpoise to the League of Schmalkalden. The new doctrines nevertheless made considerable progress in his dominions, and he was compelled to grant religious liberty to the inhabitants of Magdeburg in return for 500,000 florins. During his latter years showed more intolerance towards the Protestants, and favoured the teaching of the Jesuits in his dominions.

Market Church of Our Lady

The Market Church of Our Lady in Halle, which had been built to defend against the spread of Reformation sympathies, was the very spot where Justus Jonas officially introduced the Reformation into Halle with his Good Friday sermon in 1541. The service must have been at least partly conducted in the open air, because at that time construction had only been finished at the eastern end of the nave. Jonas began a successful preaching crusade and attracted so many people the church overflowed. Cardinal Albert left the town for good, after the estates (Stände) in the city had announced that they would take over his enormous debt at the bank of Jacob Fugger. Halle became Protestant and in 1542 Jonas was appointed as priest to St. Mary's and in 1544 bishop over the city.

Albert adorned the collegiate church (Stiftskirche) at Halle (Saale) and the cathedral at Mainz in sumptuous fashion, and took as his motto the words Domine, dilexi decorem domus tuae (Latin for: "Lord, I admired the adornment of your house."). A generous patron of art and learning, he counted Erasmus among his friends.