Albert was the only son of Otto, Count of Ballenstedt, and Eilika, daughter of Magnus Billung, Duke of Saxony. He inherited the valuable estates in northern Saxony of his father in 1123, and on his mother's death, in 1142, succeeded to one-half of the lands of the house of Billung. Albert was a loyal vassal of his relation, Lothar I, Duke of Saxony, from whom, about 1123, he received the Margraviate of Lusatia, to the east; after Lothar became King of the Germans, he accompanied him on a disastrous expedition to Bohemia in 1126, when he suffered a short imprisonment.

Albert's entanglements in Saxony stemmed from his desire to expand his inherited estates there. After the death of his brother-in-law, Henry II, margrave of a small area on the Elbe called the Saxon Northern March, in 1128, Albert, disappointed at not receiving this fief himself, attacked Udo, the heir, and was consequently deprived of Lusatia by Lothar. In spite of this, he went to Italy in 1132 in the train of the king, and his services there were rewarded in 1134 by the investiture of the Northern March, which was again without a ruler.

Once he was firmly established in the Northern March, Albert's covetous eye lay also on the thinly populated lands to the north and east. For three years he was occupied in campaigns against the Slavic Wends, who as pagans were considered fair game, and whose subjugation to Christianity was the aim of the Wendish Crusade of 1147 in which Albert took part. Diplomatic measures were more successful, and by an arrangement made with the last of the Wendish princes of Brandenburg, Pribislav of the Hevelli, Albert secured this district when the prince died in 1150. Taking the title "Margrave of Brandenburg", he pressed the "crusade" against the Wends, extended the area of his mark, encouraged German migration, established bishoprics under his protection, and so became the founder of the Margraviate of Brandenburg in 1157, which his heirs — the House of Ascania — held until the line died out in 1320. 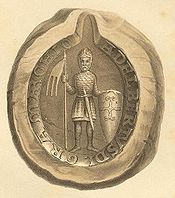 The seal of Albert the Bear.

In 1137 Conrad III, the Hohenstaufen King of the Germans, deprived Albert's cousin and nemesis, Henry the Proud of his Saxon duchy, which was awarded to Albert if he could take it. After some initial success in his efforts to take possession, Albert was driven from Saxony, and also from his Northern march by Henry, and compelled to take refuge in south Germany. When peace was made with Henry in 1142, Albert renounced the Saxon duchy and received the counties of Weimar and Orlamünde. It was possibly at this time that Albert was made Archchamberlain of the Empire, an office which afterwards gave the Margraves of Brandenburg the rights of a prince-elector.

In 1158 a feud with Henry's son, Henry the Lion, Duke of Saxony, was interrupted by a pilgrimage to the Holy Land. On his return in 1160, he, with the consent of his sons; Siegfried not being mentioned, donated land to the Knights of Saint John in memory of his wife, Sofia, at Werben at the Elbe.[1][2][3] In 1162 Albert accompanied Emperor Frederick Barbarossa to Italy, where he distinguished himself at the storming of Milan.

In 1164 Albert joined a league of princes formed against Henry the Lion, and peace being made in 1169, Albert divided his territories among his six sons. He died on 13 November 1170, possibly in Stendal, and was buried at Ballenstedt. 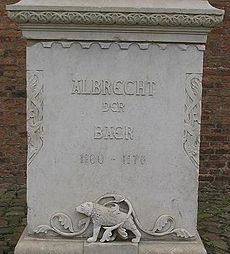 Foundation of the memorial to Albert at Spandau Citadel.

Albert's personal qualities won for him the cognomen of the Bear, "not from his looks or qualities, for he was a tall handsome man, but from the cognisance on his shield, an able man, had a quick eye as well as a strong hand, and could pick what way was straightest among crooked things, was the shining figure and the great man of the North in his day, got much in the North and kept it, got Brandenburg for one there, a conspicuous country ever since," says Carlyle, who called Albert "a restless, much-managing, wide-warring man." He is also called by later writers "the Handsome."

Albert was married in 1124 to Sophie of Winzenburg (died 25 March 1160) and they had the following children: