The Alcázar de Colón, or Columbus Alcazar, located in Santo Domingo, Dominican Republic, is the oldest Viceregal residence in America, and forms part of the Colonial Zone of Santo Domingo World Heritage Site. The building houses the Museo Alcázar de Diego Colón, whose collection exhibits the Caribbean's most important ensemble of European late medieval and Renaissance works of art, which were acquired in the 1950s. The Tapestry collection (spanning from the 15th to 17th centuries) is particularly important and unique in the Caribbean, and includes pieces produced by the Flemish Van Den Hecke family from cartouches created by Charles Le Brun.[1] The Alcázar is the most visited museum in Santo Domingo.[2]

The palace is an impressive construction of coralline blocks that once housed some fifty rooms and a number of gardens and courtyards, although what remains today is about half the size it once was. It was built under Diego Colón, the son of Christopher Columbus; when he became Viceroy of La Española and the Indies in 1509, he ordered the construction of a family home and governor’s mansion between 1510 and 1512.

The Alcázar de Colón from the Ozama River 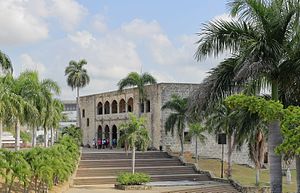 As seen from the south

During the early Spanish colonial period, the mansion occupied a very important place in history. It was from here that many expeditions of conquest and exploration were planned. In 1586, the palace was sacked by Sir Francis Drake and his forces. As the influence of Santo Domingo waned, the house fell into ruins, and by the mid-18th century was abandoned and in danger of rotting away. It was rescued and extensively restored between 1955 and 1957, being filled with period furniture, artwork, and other accessories. A self-guided tour using a portable audio speaker that discusses each room's function is available in various languages.