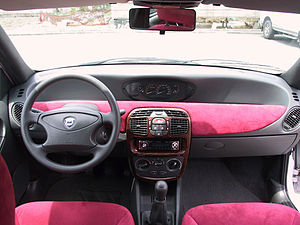 Alcantara is a covering material manufactured and marketed by Alcantara SpA. It is primarily used in the design, fashion, accessories, consumer electronics, automotive and marine industries.[1]

The material was developed in the early 1970s by Miyoshi Okamoto, a scientist working for the Japanese chemical company Toray Industries. It was based on the same technology as another product from the same company named Ultrasuede.[2] Around 1972, a joint venture between Italian chemical company ENI and Toray formed Alcantara SpA in order to manufacture and distribute the material.[3][4] The company is now owned by Toray and Mitsui.

Alcantara is composed of about 68% polyester and 32% polyurethane,[5] giving increased durability and stain resistance. The appearance and tactile feel of the material is similar to that of suede, and it may be incorrectly identified as such.

Some versions are designated as flame retardant in order to meet certain fire standards for both furnishings and automobile applications.[3]

Alcantara has applications including furniture,[6] clothing, jewellery, helmets and automotive (such as in seating, dash trimming and headliners in many high-end OEM automotive suppliers). Alcantara is being used currently as a flame retardant driver seat covering material for Formula One race cars, including the Williams Formula One 2011 FW33 car.[7] It is also used in the ear pads material for the high-end, headphones Sennheiser HD800 and the Sennheiser Momentum On-Ear.[8] Alcantara also is used in SpaceX's Crew Dragon capsule.[9]