The Alcantara (Sicilian: Alcàntara) is a river in Sicily. It has its source on the south side of Monti Nebrodi and its mouth in the Ionian Sea at Capo Schiso in Giardini-Naxos. The river is 52 kilometres (32 mi) long.

The name Alcantara is of Arabic origin (Arabic: القنطرة‎‎ al-Qanṭarah, 'the Arch') and refers to a bridge from Roman times found by the Arabs. Thucydides called it Akesines Potamos while its Latin names were "Assinus or Assinos" and "Onobala".Cantera was another hydronym adopted by Normans.

The Alcantara has its source at an elevation of 1,250 metres (4,100 ft) in the municipality of Floresta. On its way to the sea, past the north of Mount Etna, it flows through the municipalities of Randazzo, Mojo Alcantara, Francavilla di Sicilia, Motta Camastra, Castiglione di Sicilia, Graniti, Gaggi, Calatabiano, Taormina and Giardini-Naxos.

Several thousand years ago, the river bed was blocked by a lava flow from Mount Etna. As the lava was cooled much more quickly by the water than it would have done otherwise, it crystallised in the form of columns. Over the next millennia, the river naturally eroded a channel through these columns, resulting in impressive gorges and ravines such as the "Gole dell'Alcantara" next to Francavilla di Sicilia where Peloritani mountains end. 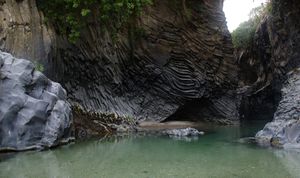 The Alcantara river park (Parco fluviale dell'Alcantara) was established in 2001 for protection of the river, and to encourage its use as a relaxation area and tourist destination.