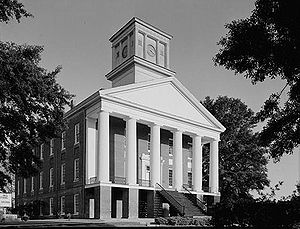 Oakland Chapel on the campus of Alcorn State University 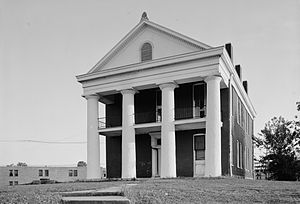 The Literary Society Building on the campus of Alcorn State University

Alcorn State University (Alcorn) is a historically black comprehensive land-grant institution in Lorman, Mississippi. It was founded in 1871 by the Reconstruction era legislature to provide higher education for freedmen. It is the first black land grant college established in the United States.

The university is counted as a census-designated place and had a resident population of 1,017 at the 2010 census.[1]

Medgar Evers, a civil rights activist, graduated from the university in 1948. Students at the college were part of the mid-twentieth century civil rights struggle, working to register residents for voting and struggling to end segregation. Other alumni have been activists, politicians and professionals in Mississippi and other states. The university is a member-school of the Thurgood Marshall College Fund.

Alcorn State University was founded at the former Oakland College, a school for whites established by the Presbyterian Church. Oakland College closed its doors at the beginning of the American Civil War because of the outbreak of war; most students enlisted in the military. When the college failed to reopen at the end of the war, the property was sold to the state of Mississippi. It renamed the facility as Alcorn University in 1871, in honor of James L. Alcorn, then the state's governor, and established it as a land grant institution and historically black college. [2][3]

This was the first black land grant college in the country. Congress required that states with segregated educational institutions (as was maintained in all the former Confederacy) designate black land grant colleges in order to receive land grants monies for white colleges, as Congress had authorized the program to benefit students of all races. Alcorn University started with what are recognized as three historic buildings.[4]

United States Senator Hiram R. Revels resigned his seat when offered the position as Alcorn's first president. The state legislature provided $50,000 in cash for ten successive years for the establishment and overall operations of the college. The state also granted Alcorn three-fifths of the proceeds earned from the sale of 30,000 acres (12,000 ha) of land scrip for agricultural or land grant colleges under federal legislation. The land was sold for $188,928 with Alcorn receiving a share of $113,400. This money was to be used solely to support the agricultural and mechanical components of the college, which Congress wanted to develop nationally. From its beginning, Alcorn State University was a land-grant college.

In 1878, the name Alcorn University was changed to Alcorn Agricultural and Mechanical College. The university's original 225 acres (0.91 km2) of land have been expanded to develop a 1,700 acres (6.9 km2) campus. The goals for the college set by the Mississippi legislature following the Reconstruction era emphasized training for blacks rather than academic education. The school, like other black schools during these years, was less a college than a vocational school intended to prepare students for the agricultural economy of the state andof most of their hometowns.

At first the school was exclusively for black males, but women were admitted in 1895. Today, women outnumber men at the university 1800 to 1200. Alcorn began with eight faculty members in 1871. Today the faculty and staff number more than 500. The student body has grown from 179 mostly local male students to more than 4,000 students from all over the world.

In 1974 Alcorn Agricultural and Mechanical College was renamed Alcorn State University, representing the development of its programs. Governor William L. Waller signed House Bill 298 granting university status to Alcorn and the other state-supported colleges. Alcorn had already become a more diversified university, with graduate programs. It provides an undergraduate education that enables students to continue their work in graduate and professional schools, engage in teaching, and enter other professions. It also provides graduate education to equip students for further training in specialized fields.

Alcorn State is accredited, with seven schools and degree programs in more than fifty areas, including a nursing program. The facilities number approximately 80 modern structures with an approximate value of $71 million.[5]

In late 2013, the state began investigating the university's purchasing policies. Three administrators, including the president and the chief financial officer, have resigned while these investigations have been conducted.[6]

The university has seven schools, offering more than 50 different fields of study.

The Honors Program is an option for qualified undergraduate students who wish to enhance their academic experience and leadership skills.[9]

Alcorn State University offers a general Master of Business Administration (MBA) program through its Natchez campus. Classes are conducted in evening to accommodate its working executive students. Additionally, students off-site may join the live lecture classes via live video feed through the internet. The MBA program offered by Alcorn School of Business is accredited by the Accreditation Council for Business Schools and Programs (ACBSP), global accrediting body for quality business degree programs. Ever since its inception, the Alcorn State's MBA program has been very popular with international students.

Alcorn offers pre-professional programs to prepare students for a transition to specialized studies in the fields of law, engineering, nursing, physical therapy, pharmacy and dentistry.[11]

Alcorn State University is accredited by the Commission on Colleges of the Southern Association of Colleges and Schools to award the Associate, Bachelor's, Master's, and Specialist in Education degrees.

The main campus is located near Lorman, Mississippi. The Nursing School and the Business School's Master of Business Administration (MBA) program are located in Natchez, Mississippi. The university also has a class center in Vicksburg.

Current and planned construction projects include:

Alcorn State has campuses in Natchez and Vicksburg.

Jay Searcy of the Philadelphia Inquirer wrote in 1994 that Alcorn had "a gritty football team that has sent 68 players to the National Football League...", an achievement for a small school in a rural area of Mississippi.[12] His article was chiefly about Steve McNair, who is among those numerous players to have gone on to professional football careers.

Alcorn State University's marching band is known as the "Sounds of Dyn-O-Mite" (SOD). The band has more than 220 members and was founded in the 1960s. The "Golden Girls" (GGs) is an established dance squad that has been featured with the marching band since its inception.

The marching band is led by four drum majors.