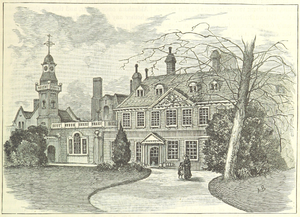 Aldenham House is a former country house in Elstree, just south-west of Aldenham village and west of Borehamwood, Hertfordshire, which was the seat of the Gibbs family, who were the Barons Aldenham. The site today accommodates the Hilfield Reservoir, the Lister Institute, the Haberdashers' Aske's Boys' School and Haberdashers' Aske's Girls' School.

The house was built c.1672 for H. Coghill the Younger and was acquired, renovated and extended c.1870 by the wealthy Hucks Gibbs, 1st Baron Aldenham. In 1932 the estate was sold after the death of its then occupant Vicary Gibbs, a wealthy financier, MP and avid plant collector who had amassed a larger collection of Chinese flora than the Royal Botanic Gardens Kew. Gibbs never married, and most of the plant collection was auctioned.[1]

The house and grounds became a country club until the Second World War, when it was requisitioned by the BBC for use as an overseas broadcasting station. After the war the house stood empty until occupied by the Haberdashers' Aske's Boys' School in 1961. [2]

Aldenham House is a Grade II* listed building. [3] Its frontage and grounds have been used to film a number of episodes of several iconic 1960s T.V. series including The Avengers and The Saint.