Aldhelm (Old English: Ealdhelm, Latin: Aldhelmus Malmesberiensis) (c. 639 – 25 May 709), Abbot of Malmesbury Abbey, Bishop of Sherborne, and a writer and scholar of Latin poetry, was born before the middle of the 7th century. He is said to have been the son of Kenten, who was of the royal house of Wessex.[1] He was certainly not, as his early biographer Faritius asserts, the brother of King Ine.[2] After his death he was venerated as a saint, his feast day being the day of his death, 25 May.

Aldhelm received his first education in the school of the Irish scholar and monk Máeldub (also Maildubh, Maildulf or Meldun) (died c. 675),[3] who had settled in the British stronghold of Bladon (or Bladow) on the site of the town called Mailduberi, Maldubesburg, Meldunesburg, etc., and finally Malmesbury, after him.[2]

In 668, Pope Vitalian sent Theodore of Tarsus to be Archbishop of Canterbury. At the same time the North African scholar Hadrian became abbot of St Augustine's at Canterbury. Aldhelm was one of his disciples,[1] for he addresses him as the 'venerable preceptor of my rude childhood.' He must, nevertheless, have been thirty years of age when he began to study with Hadrian. His studies included Roman law, astronomy, astrology, the art of reckoning and the difficulties of the calendar. He learned, according to the doubtful statements of the early lives, both Greek and Hebrew. He certainly introduces many Latinized Greek words into his works.[2]

Ill health compelled Aldhelm to leave Canterbury and he returned to Malmesbury Abbey, where he was a monk under Máeldub for fourteen years, dating probably from 661 and including the period of his studies with Hadrian.[2]

When Máeldub died, Aldhelm was appointed in 675,[1] according to a charter of doubtful authenticity cited by William of Malmesbury, by Leuthere, Bishop of Winchester (671–676), to succeed to the direction of the monastery, of which he became the first abbot.[2][3]

Aldhelm introduced the Benedictine rule and secured the right of the election of the abbot by the monks themselves. The community at Malmesbury increased, and Aldhelm was able to found two other monasteries as centres of learning, at Frome, Somerset and at Bradford-on-Avon, Wiltshire. Following a pilgrimage to Rome, he was given permission by Pope Sergius I in a Papal Bull of 701 to establish the monastery at Frome, where he had already built a church circa 685.[4] The Anglo-Saxon building of St Laurence's Church, Bradford-on-Avon dates back to his time, and may safely be regarded as his. At Malmesbury he built a new church to replace Máeldub's modest building,[3] and obtained considerable grants of land for the monastery.[2] Aldhelm held this post until circa 705 when he became Bishop of Winchester.[5] 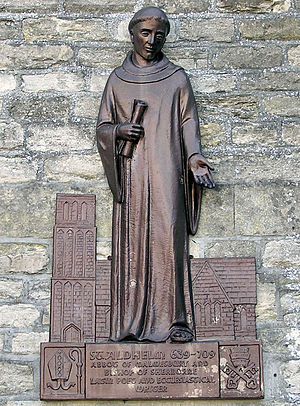 Aldhelm's fame as a scholar spread to other countries. Artwil, the son of an Irish king, submitted his writings for Aldhelm's approval, and Cellanus, an Irish monk from Peronne, was one of his correspondents. Aldhelm was the first Anglo-Saxon, so far as we know, to write in Latin verse, and his letter to Acircius (Aldfrith or Eadfrith, king of Northumbria) is a treatise on Latin prosody for the use of his countrymen. In this work he included his most famous productions, one hundred and one riddles in Latin hexameters. Each of them is a complete picture, and one of them, De creatura, runs to 83 lines.[2]

That Aldhelm's merits as a scholar were early recognised in his own country is shown by the encomium of Bede (Historia ecclesiastica gentis Anglorum 5.18), who speaks of him as a wonder of erudition. His fame reached Italy, and at the request of Pope Sergius I he paid a visit to Rome, of which, however, there is no notice in his extant writings. On his return, bringing with him privileges for his monastery and a magnificent altar, he received a popular ovation.[2]

Aldhelm was deputed by a synod of the church in Wessex to remonstrate with the Britons of Dumnonia (Devon and Cornwall) on the Easter controversy. British Christians followed a unique system of calculation for the date of Easter and also bore a distinctive tonsure; these customs are generally associated with the practice known as Celtic Christianity. Aldhelm wrote a long and rather acrimonious letter to king Geraint of Dumnonia (Geruntius) achieving ultimate agreement with Rome.[6]

In 705, or perhaps earlier, Hædde, Bishop of Winchester, died, and the diocese was divided into two parts.[7] Sherborne was the new see, of which Aldhelm became the first bishop around 705.[8] He wished to resign the abbey of Malmesbury which he had governed for thirty years, but yielding to the remonstrances of the monks he continued to direct it until his death. He was now an old man, but he showed great activity in his new functions. The cathedral church which he built at Sherborne, though replaced later by a Norman church, is described by William of Malmesbury.[2] In his capacity as bishop, he displayed a great deal of energy. This included going into public places where he would sing hymns and passages from the gospels interspersed with bits of clowning to draw attention to his message.

Aldhelm was on his rounds in his diocese when he died at the church in Doulting village in 709, the Church of St Aldhelm and St Aldhelm's Well in the village are dedicated to him.[8][9] The body was taken to Malmesbury, and crosses were set up by his friend, Egwin, Bishop of Worcester, at the various stopping-places.[10] He was buried in the church of St Michael at Malmesbury Abbey.[11] His biographers relate miracles due to his sanctity worked during his lifetime and at his shrine.[2] The cape in Dorset commonly known as St Alban's Head is more properly called St. Aldhelm's Head in his honour.

Aldhelm was revered as a saint after his death, with his feast day being celebrated on 25 May.[1] His relics were translated in 980 by Dunstan, the Archbishop of Canterbury.[11] He is commemorated by a statue in niche 124 of the West Front of Salisbury Cathedral. There is also a statue in Sherborne Abbey of Aldhelm, created in 2004 by Marzia Colonna.[12]

Aldhelm's flag may be flown in his celebration. The flag, a white cross on a red background, is a colour reversed version of England's St. George flag.[13][14]

Aldhelm is remembered in the Church of England with a commemoration on 25 May.[15]

Aldhelm wrote in elaborate, grandiloquent and very difficult Latin, known as hermeneutic style. This verborum garrulitas shows the influence of Irish models and became England's dominant Latin style for centuries,[16] though eventually it came to be regarded as barbarous.[17] His works became standard school texts in monastic schools, until his influence declined around the time of the Norman Conquest.

According to William of Malmesbury, Aldhelm also wrote poetry in Old English and set his own compositions to music, but none of his songs, which were still popular in the time of Alfred, have come down to us. Finding his people slow to come to church, he is said to have stood at the end of a bridge singing songs in the vernacular, thus collecting a crowd to listen to exhortations on sacred subjects.[2][22]