From Infogalactic: the planetary knowledge core
Jump to: navigation, search
For other uses of the term Aldridge, see Aldridge (disambiguation).

Aldridge is a town within the Metropolitan Borough of Walsall, in the West Midlands, England. Historically it was part of the county of Staffordshire, but in 1974 it was incorporated into the West Midlands county. It also became part of the borough of Walsall at this time, having originally been an independent local authority and then being merged with neighbouring Brownhills to form Aldridge-Brownhills UDC in 1966. 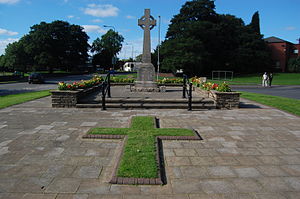 Aldridge was recorded as a settlement in the Domesday Book of 1086, though the now much larger settlement of Walsall was not.[3] It was valued at 15 shillings under the name of "Alrewic", which may have originated from an abundance of Alder trees in the area.[4]

Aldridge began as a small agricultural settlement, with farming being the most common occupation up until the 19th century.

In the 1800s, Aldridge became an industrial town with coal mines and lime kilns. The coal and clay in the area prompted many to set up collieries and brickworks. Aldridge clay is especially useful in the manufacture of blue bricks. The 1881 census shows that the mines and brick works were major employers. Because the coal and clay beneath the eastern side of Aldridge (towards Stonnall) is located much deeper under the surface, extraction of this coal and clay would not have been economically viable. As a result, farms continued to dominate the eastern part, though a sand quarry was set up and still remains on Birch Lane.[5]

Aldridge became an urban district in Staffordshire in 1894. Other villages within the district included Pelsall, Walsall Wood, Clayhanger and Streetly. This merged with Brownhills in 1966 to form Aldridge-Brownhills, and then became part of the Metropolitan Borough of Walsall in 1974.

Aldridge was twinned with Montelimar, France in May 1964.

Aldridge is a relatively affluent area of the West Midlands that has mostly private homes that have been built since the 1920s.[citation needed]

Since 1979, Aldridge's MP was Richard Shepherd (Conservative), the MP for Aldridge-Brownhills.[7][8] He stood down at the 2015 General Election. In May 2015 Wendy Morton was selected as the new MP.

In Aldridge there are a number of factories, mostly located on Empire Industrial Park, but also towards Walsall Wood along the main road, Northgate. Some of the most notable factories include the large Ibstock brick works, and the GKN Driveshafts factory, although both of the latter companies have closed in recent years due to relocation and cheaper foreign imports. Birlec, a manufacturer of industrial furnaces relocated to Aldridge in the late 1950s, but has since closed. Aldridge Plastics Ltd, a plastics injection moulder, was set up in the town in 1968 and continued trading for almost 40 years before ceasing production in 2007. From January 2011, GFP Engineering Ltd, a Glass Reinforced Plastic (GRP) moulding company, will commence trading after relocating from nearby Lichfield.[citation needed] There is also a marina, Aldridge Marina, which recently underwent full refurbishment offering facilities for canal boat moorers.

Most of the town's shops are located either on High Street, Anchor Road, or in the shopping area known as "The Parade". Well-known shops here include WH Smith, Iceland supermarket, Home Bargains, and Boots The Chemist. There are a number of independent shops, an indoor market and a Morrisons supermarket just outside the town centre. The village is covered by three main firms of solicitors. Lloyds TSB, NatWest, Barclays and HSBC all have branches in the town. The oldest independent insurance broker in the area R.H.N. Riley Ltd were established in 1958. There are take-aways and restaurants in Aldridge, Chinese, Indian, Greek, pizza and fish and chips.

Aldridge is served by local bus services. Many of the buses in Aldridge were renumbered in April 2010 as part of National Express West Midlands' attempt to simplify bus services in and around the Walsall area. Bus operators operating services through Aldridge are:

Aldridge used to have a platform on the Sutton Park Line running to Walsall that operated services for passengers, though the station was closed in 1966 and since then the line has been used only for freight trains. Recently, there has been talk of re-opening this line for passengers and in the late 1990s/early 2000s, plans were drawn up for a modern station to be built on the site of the old one.[15] The site of the old station lies behind the new doctor's surgery at the bottom of Portland Road, and part of the old platform is still visible. Should the station be re-opened, it has potential to become a park & ride station and could offer services to Birmingham via Sutton Coldfield, or the short journey into Walsall. Despite the plans that have been drawn up, nothing has yet happened. This is mainly because there are too many freight trains and currently no other route to which to move freight traffic.[citation needed]

There are also speculative plans to use the closed South Staffordshire Line as a single track freight line, which would be a quicker route from Stourbridge to Bescot, and this would also clear the way to re-introduce passenger services to Aldridge. This section of line was last used in 1984, and the entire trackbed remains intact, even though the track itself is long gone. There is no timescale for when (or if) the re-opening of this railway through Aldridge will take place, although Network Rail hopes that the bulk of the line between Walsall and Brierley Hill will re-open to goods trains by 2012.[citation needed]

Aldridge Rugby Football Club was formed in 1998 from an amalgamation of two established rugby clubs based in Birmingham: Witton and Old Centrals. The club is based on the former Old Centrals sports ground at Bourne Vale in Aldridge and currently plays in Midlands 5 West (North) fielding three senior sides.

Aldridge Compass Suites (based at the Masonic Hall on the Green) is a venue for wedding receptions, christenings and other functions.

The Aldridge Youth Theatre, was officially opened by the actor Bernard Hepton and is located on Noddy Park Road by the Croft. It is run by a group of volunteers and puts on a variety of plays throughout the year. A pantomime is usually staged in January.

Air Cadets: 425 (Aldridge) Squadron, part of Staffordshire Wing of the Air Training Corps was formed in 1941 and currently occupies a purpose-built HQ close to the village centre. The Squadron is run by uniformed RAFVR(T) officers and ATC SNCO adult staff, assisted by civilian instructors and a padre.

The 36th Walsall 1st Aldridge scout group is located on Middlemore Lane, opposite Anchor Meadow, and runs Beaver, Cub, Scout and Explorer sections for boys aged 6 and upwards. The beavers are aged 6–8, cubs are aged 8–10/11, scouts are aged 11–14 and explorers are aged 14–18.

The Methodist church, is used by 1st Aldridge Girl guides, as well as two brownie groups and a rainbow group. The rainbows group is for girls aged 5–7, the brownies for girls aged 7–10, and guides aged 10–14. Older girls do take part, and are known as the senior section.

St. Mary's Parish Church has one of the largest church youth groups in the area.[citation needed] Around 90 young people, between the ages of 13 and 18, attend the group. The group also hosts an annual summer camp in Wales (in recent years attracting over 100 teenagers), as well as a weekend away in February.

The 33rd Walsall Scout group is based at Aldridge Methodist Church and holds Beavers, Cubs and scouts for boys and girls aged 6–14. They go on annual scout camps and have been to Beaudesert Campsite and Blackwell Adventure.

The 49th Walsall Scout Group is the third Scout Group in Aldridge based at St. Thomas's Church in Churchside Way on the estate just off Lazy Hill Road and Greenwood Road, it also caters for boys between the ages of 6 and 18.

Richard Sinnott - Actor attended Leighswood School, then Aldridge School. He has appeared in Coronation Street, Emmerdale, Where the Heart Is and Life on Mars. He is the older brother of Lee Sinnott (below).

Charles George Bonner VC, DSC (29 December 1884 – 7 February 1951), born in Aldridge, was an English recipient of the Victoria Cross, the highest and most prestigious award for gallantry in the face of the enemy that can be awarded to British and Commonwealth forces. Bonner Grove is a well-maintained neighbourhood of council flats and privately owned houses in Aldridge that remembers his name.

Charles Holland (cyclist) - a British road bicycle racer. He was one of the first two Britons to ride the Tour de France. Rode in Olympic Games: Los Angeles 1932 and Berlin 1936.[citation needed]

Vic Milne - Had a doctor's surgery in Portland Road, Aldridge.[citation needed] Played football for Aston Villa, including an appearance in the 1924 FA Cup Final where his team were defeated 2-0 by Newcastle United.

Lee Sinnott - Footballer (born 12 July 1965 in Aldridge, Walsall, England) is an English ex-professional footballer and was the manager of Farsley Celtic, whom he led to promotion three times in four years. He went on to manage Port Vale for a short period. He began his career at Walsall as an apprentice, and played in the 1984 FA Cup final for his next club Watford in 1984. He captained Huddersfield Town to Division Two playoff glory in 1995.

Eleanor Simmonds MBE - swimmer representing Great Britain in the Paralympics. She won two gold medals at each of the 2008 and 2012 Paralympics. She attended Cooper and Jordan Primary School, then Aldridge School, before attending school in Swansea.[18]