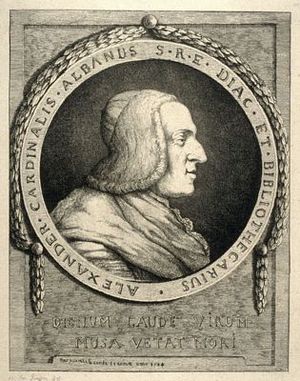 Alessandro Albani (15 October 1692 – 11 December 1779) was a leading collector of antiquities in Rome and a commissioner of works of art. He supported the art historian, Johann Joachim Winckelmann and commissioned paintings from Anton Raphael Mengs. As a Roman Catholic cardinal (from 1721) he furthered the interests of the governments of Austria, Savoy and Britain against those of France and Spain.

Alessandro Albani was born in Italy on 15 October 1692 in Urbino, then part of the Papal States. He was the son of Orazio Albani. His education at La Sapienza University in Rome was towards a degree in jurisprudence. Early in life he also studied for a military career. He was made an honorary member of the military brotherhood of justice of the Knights of St. John, Rome, on 26 August 1701, at the age of nine, and a colonel of a regiment of dragoons in the pontifical troops, in 1707.

Alessandro Albani descended from the Albani family (branch of Urbino), which originated from into the Albani (family) that had established itself there from northern Albania in the 15th century.[1] Alessandro's father, Orazio, was the brother of Pope Clement XI Albani, who convinced Alessandro to set aside his budding military career, for which the weakness of his eyesight, that led to blindness in his advanced age, did not recommend him, and become a clergyman. After Pope Clement XI's death in March 1721, Pope Innocent XIII appointed Alessandro as a cardinal, on 16 July 1721 - for which Alessandro required numerous special dispensations, not least because his brother, Annibale Albani, had been made a cardinal in 1711 and still sat in the Sacred College[2] 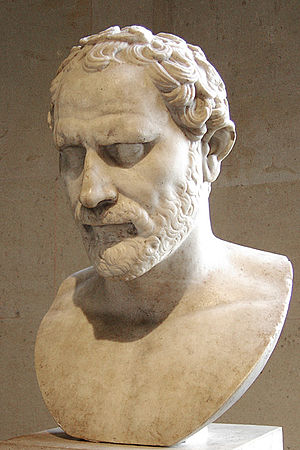 Albani developed into one of the most astute antiquarians of his day, an arbiter of taste in the appreciation of Roman sculpture, and "a powerful and enterprising collector of Roman antiquities and patron of the arts... He used both ancient and modern art as a form of cultural capital," Seymour Howard observed,[3] "giving away acquisitions as favours and selling them for perpetually needed funds or when they lost efficacy for him." His first apprenticeship in this area was served under the papal antiquary and curator Marcantonio Sabatini.[4]

He was the formal protector of Rome's artists as patron of the Accademia di San Luca and was a powerful advocate for his favourites. Among the works of modern artists that passed through his hands was the album of drawings by Carlo Maratti that was sold in 1763 to George III and is conserved in the Royal Collection.[5]

His worldly and undisciplined customs, and his sympathy with the Hanoverian party in Britain[6]—whereas Clement kept the Stuart pretender as his perennial guest in Rome— exemplified by his friendship with Baron Philipp von Stosch, who shared many of Alessandro Albani's interests, and his correspondence with Sir Horace Mann, the British envoy at Florence,[7] caused Clement many occasions of concern. Named papal envoy, with his brother Cardinal Carlo, to Bologna to welcome King Frederick IV of Denmark, he was sent in 1720 to Vienna in an attempt to retain Papal territorial rights in the duchy of Parma and Piacenza, recently awarded to Charles de Bourbon, and to conclude the negotiations for the restitution of Comacchio, in the possession of Habsburg troops since 1707. 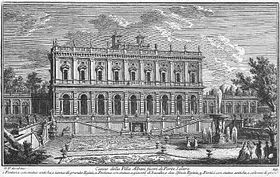 A mid-18th-century view of the Villa Albani by Giuseppe Vasi.

His accommodating manner suited him for diplomatic tasks, such as the successful negotiations with Vittorio Amedeo II over conflicting rights of nomination and investiture, aggravated by the acquisition by the House of Savoy of Sardinia, over which the papacy had long-standing feudal pretensions. Accords were finalized in 1727 during the papacy of Pope Benedict XIII, for which Vittorio Amedeo thanked Cardinal Alessandro with a rich abbacy and the title of "Protector of the Kingdom". Within the Papal Curia, however, the party of the zelanti considered the accords too generous in their terms. Tensions increased with the pontificate of Clement XII, unsympathetic to Savoia. When a new concordat was arrived at in 1741, Alessandro Albani signed on the part of Savoia.

From the time of the papacy of Pope Clement XIV he realigned himself with the zelanti against the interference of Roman Catholic monarchs in the diplomacy that surrounded the eventual expulsion and Suppression of the Jesuits from most Catholic Christian countries.

He died on 11 December 1779. He was buried in the Observant Franciscan Church of San Pietro in Urbino, Marche, Italy.

Alessandro commissioned in 1745 the construction of the prominent Villa Albani in Rome. Building began in 1751 according to Giuseppe Vasi and celebrated as complete in 1763,[8] to house his evolving, constantly replaced and renewed collections of antiquities and ancient Roman sculpture, which soon filled the casino that faced the Villa down a series of formal parterres. Albani's lifelong friend Carlo Marchionni was the architect in charge, at the Villa and perhaps also for the two temples in the park, an Ionic temple of Diana and a sham ruin. The Albani antiquities were catalogued by the Cardinal's secretary, the first professional art historian, Johann Joachim Winckelmann, who was supported by Albani from the time when the Seven Years' War stranded him in Rome without his pension, and whose own connoisseurship was sharpened by the connection.[9]

After the Napoleonic upheavals the Albani heirs sold the villa to the Chigi, who eventually sold it to the Torlonia, the Roman bankers, to whom the villa still belongs (?) Cardinal Albani's coins and medals went to the Vatican Library, over which he had presided from 1761. The sarcophagi, columns and sculptures have been dispersed, but the famous bas-relief of Antinous remains in the villa.

Cardinal Alessandro Albani had another villa and park at Porto d'Anzio, that was finished in February 1732,[10] but was habitable for a few weeks only in spring because of malaria. Perhaps the villa, and certainly a casina in the park were by Marchionni.[11] Excavations in the park brought to light many ancient Roman sculptures. Here J. J. Winckelmann was housed.[12]