Alessandro Petacchi (born 3 January 1974 in La Spezia, Liguria) is an Italian former professional road racing cyclist, who last rode for the Wilier Triestina–Southeast team.[1] A specialist sprinter, Petacchi has won 48 grand tour stages with wins of the points jersey in the Giro d'Italia in 2004, the Vuelta a España in 2005 and the Tour de France in 2010. He also won the classics Milan – San Remo in 2005[2] and Paris-Tours in 2007.[3] His career spanned over 18 years during which he earned 183 victories.[4]

In 2007, Petacchi was banned from cycling and had his results achieved disqualified for doping. The court later said that he had not cheated on purpose but had not taken enough care when consuming his legal asthma drug.[5] He announced his retirement as a lead sprinter on 23 April 2013, and terminated his contract at Lampre–Merida,[4][6] but is now a lead-out man.[7] He rejoined the professional peloton in August 2013, joining the Omega Pharma–Quick-Step squad.[8]

Petacchi turned professional in 1996, and rode for a number of teams. In 2006 he moved to Team Milram with sprinter Erik Zabel, following the disbanding of Fassa Bortolo. His explosive speed won him stages in all three of the Grand Tours. In 2004 he won a record nine stages at the Giro d'Italia, which resulted in winning the points classification. He won his first classic in 2005, Milan–San Remo. He had the better of a mass sprint, beating Danilo Hondo, Thor Hushovd, Stuart O'Grady and Óscar Freire.[2]

He withdrew from the 2006 Giro d'Italia after crashing during the third stage. He had finished the stage with a broken kneecap.[9] In 2007, he won five stages in the Giro d'Italia, bringing his tally of ProTour victories to 21 and making him the rider with most UCI ProTour victories. During that season, he registered a success of prestige in Paris-Tours. With support from his teammate Erik Zabel, Petacchi was the victor in the mass gallop, with Francesco Chicchi and Oscar Freire rounding up the podium.[3]

After a non-negative result for the asthma drug salbutamol, which Petacchi had clearance to use, he was placed on non-active status and missed the 2007 Tour de France.[11] Petacchi was absolved when the Italian Cycling Federation ruled that overuse of Salbutamol was human error.[12]

On 6 May 2008, the Court of Arbitration for Sport banned Petacchi until the end of August, applied retroactively from November. It said all competitive results obtained during the 2007 Giro d'Italia shall be disqualified with all of the resulting consequences including forfeiture of any medals, points and prizes. Results after 31 October 2007 and during his ban were disqualified including five Giro d'Italia stage wins. The court said Petacchi had not intended to cheat and that it was likely that he had inadvertently consumed too much medication, but he had not exercised "utmost caution."[13] The case was considered controversial,[14] as it kept Petacchi from starting the Tour de France as he had planned[15] and for the court ruling that he should be suspended despite acknowledging that he had not cheated. Petacchi maintained that he had done no wrong.[16]

As a result of this, on 16 May 2008, Petacchi was fired by Team Milram.[17] After his suspension he joined LPR Brakes–Ballan.

LPR Brakes and beyond

After winning a few minor races in 2008, Petacchi started 2009 strongly by winning the Scheldeprijs Vlaanderen semi-classic race. He was selected to ride the Giro d'Italia and won the second and third stages, wearing the pink jersey on stage 3 and the cyclamen jersey on stages 2 through 5.[18]

Petacchi signed with Lampre–Farnese Vini for the 2010 season.[19] He announced his retirement after the 2013 Paris–Roubaix, citing a lack of motivation to continue as a lead sprinter. However he subsequently expressed a desire to take up an offer from the Omega Pharma-Quick Step team to ride as a lead-out man for Mark Cavendish, which he said was made to him days after his retirement. The contract offer was blocked by the UCI as it forbids riders from transferring from one team to another mid-season.[20] In July 2013 Patrick Lefevere announced that Petacchi would be joining Omega Pharma-Quick Step from the start of August on a 14-month contract.[8] On 12 April 2014 he got his first victory for his new team at Grand Prix Pino Cerami and also his first victory since 2012. In January 2015 it emerged that Petacchi would ride for Southeast Pro Cycling in 2015.[1] However after racing in that year's Giro at the age of 41 and being forced to withdraw from the race one day before its conclusion due to a virus, Petacchi announced his second retirement from the sport in June 2015.[21] 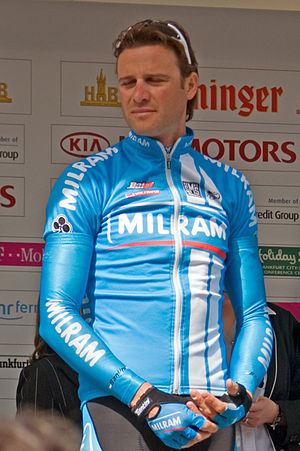 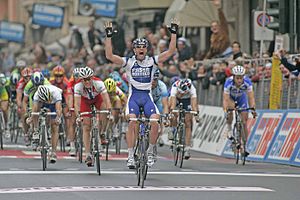 Petacchi at the 2005 Milan–San Remo, where he won his first Classic race.