Alexander James Adie FRSE MWS (1775, Edinburgh – 1859, Edinburgh) was a Scottish maker of medical instruments, optician and meteorologist. He was the inventor of the sympiesometer, patented in 1818.[1] 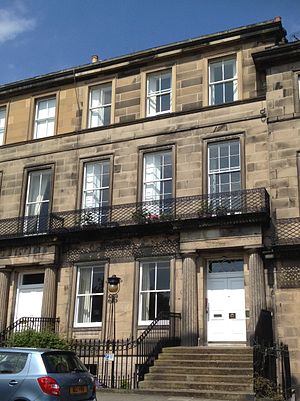 He was born the son of John Adie.

He was apprenticed in 1789 to his uncle John Miller. They later went into business together as Miller and Adie, Mathematical Instrument Makers, which continued until 1822.

Adie supplied lenses to Joseph Hooker, Charles Darwin[3] and Sir David Brewster and was optician to William IV and to Queen Victoria.[4] He invented the sympiesometer or marine barometer and had a small observatory erected long before there was a public observatory in Edinburgh.[4] He was elected as Fellow of the Royal Society of Edinburgh on 25 January 1819, upon the proposal of Lord F Gray, Sir David Brewster and James Russell.

Adie lived at 10 Regent Terrace, Edinburgh from 1832 to 1838.[4] He died at Caanan Lodge, Edinburgh (now demolished), and was interred in Greyfriars Kirkyard.

Adie's son was born on 16 December 1808 and also named Alexander James Adie after his father.[1]

He studied at the High School in Edinburgh and then Edinburgh University before training as a civil engineer under James Jardine.

In 1836 he became Resident Engineer on the Bolton, Chorley and Preston Railway. In 1863 he became Manager of the Edinburgh and Glasgow Railway.

In February 1846 he followed in his father's footsteps and was elected a Fellow of the Royal Society of Edinburgh.

He died at his house, Rockville near Linlithgow, on 3 April 1879.