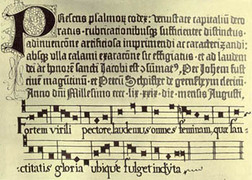 Alexander Agricola (/əˈɡrɪkələ/; born Alexander Ackerman;[1] 1445 or 1446 – 15 August 1506) was a Netherlandish composer of the Renaissance writing in the Franco-Flemish style. A prominent member of the Grande chapelle, the Habsburg musical establishment, he was a renowned composer in the years around 1500, and his music was widely distributed throughout Europe. He composed music in all of the important sacred and secular styles of the time.[2]

Very little is known of Agricola's early life. He was born in Ghent, as suggested by a recently discovered epitaph, written in 1538.[3] Most of his life he spent in posts in Italy, France and the Low Countries, though there are gaps where his activities are not known, and he seems to have left many of his posts without permission. He was a singer for Duke Sforza of Milan from 1471 to 1474, during the period when the Milanese chapel choir grew into one of the largest and most famous ensembles in Europe; Loyset Compère, Johannes Martini, Gaspar van Weerbeke, and several other composer-singers were also in Milan during those years.[4]

In 1474 Duke Sforza wrote a letter of recommendation for him to Lorenzo de' Medici, and Agricola accordingly went to Florence. In 1476 he is known to have been in Cambrai, in the Low Countries, where he probably was employed as a singer. For the long period from 1476 to 1491 nothing definite is known except that he spent part of the time in the French royal chapel, and he must have been building his reputation as a composer during this time, for he was much in demand in the 1490s, with France and Naples competing for his services. In 1500 he took a position with Philip the Handsome, who was Duke of Burgundy and King of Castile. He apparently accompanied the Duke on his travels through his empire; by this time he was one of the most esteemed composers in Europe. He was in Valladolid, Spain, in August 1506, where he died during an outbreak of the plague on 15 August of that year.

Agricola is one of the few transitional figures between the Burgundian School and the style of the Josquin generation of Netherlanders who actually wrote music in both styles.

Agricola's style is related to that of Johannes Ockeghem, especially early in his career, and towards the end of his life he was writing using the pervasive imitation characteristic of Josquin des Prez. While few of his works can be dated precisely, he does use many of the non-imitative, complex, rhythmically diverse contrapuntal procedures more often associated with Ockeghem. Unlike Ockeghem, however, he was willing to employ repetition, sequence, and florid imitation in the manner of the other composers who were working around 1500 when the technique became widespread.

Agricola wrote masses, motets, motet-chansons, secular songs in the prevailing formes fixes such as (rondeaux and bergerettes, other chansons), and instrumental music. Much of his instrumental music was based on secular music by Gilles Binchois or Ockeghem. Many of these pieces had become quite popular in the late 15th century.

Above all the variants in his general musical style over his working life, Agricola himself wrote in a highly distinctive style, taking the mysteriously sinuous lines of Ockeghem as his point of departure. His music is often very busy and highly detailed, with repeated sequence, repetition of terse rhythmic and motivic units, and a desire to usurp the underlying pulse, sometimes seeming to border on the perverse, either by prolonging cadential figures to cadence on the "wrong" beat, or by shifting the metrical beat of some parts against others. As an example, the closing Agnus Dei of his unusually extended Missa 'In myne zin' features the cantus firmus stated in equal notes of eleven quavers' duration each in first statement, followed by a statement of five quavers' duration each, or in the second Salve Regina setting, offsetting part of the statement of the cantus firmus by a quaver for its entire duration, in both cases with the other voices proceeding in a more strict quadruple meter above.

Other "games" played in the music include posing puzzles of mode and musica ficta for the performers (e.g. the Kyrie of the Missa Le serviteur plays with the expectations of the very well known plainchant cantus firmus by setting up some knotty issues of the implied possibility of modal inflection with consistent extra flats.) The music is characteristically athletic in all voice parts, with the lower parts in particular featuring much that requires very fine singers, and not representing the normal simply harmonic function of the tenor-bass combinations used by most of his contemporaries. Often a highly elaborate set of quick motifs will spring unexpected from a previous slow-moving texture (e.g. the eruption of detailed duos beginning at Glorificamus te and climaxing at Adoramus te in the Gloria of the Missa in myne zin).

His music was very highly regarded in its day, the very distinctive style leading to one contemporary commentator referring to it as "crazy", and another as "sublime".

There are other composers named Agricola who are sometimes confused with Alexander: