From Infogalactic: the planetary knowledge core
Jump to: navigation, search
For the physician and explorer, see Alexander H. Rice, Jr..

Alexander Hamilton Rice (August 30, 1818 – July 22, 1895) was an American politician and businessman from Massachusetts. He served as Mayor of Boston from 1856 to 1857, a U.S. Congressman during the American Civil War, and as the 30th Governor of Massachusetts from 1876–78. He owned one of the nation's largest paper products distributors,

Portrait of Rice as a boy

Alexander Hamilton Rice was born in Newton Lower Falls, Massachusetts, to Thomas and Lydia (Smith) Rice, on August 30, 1818. His father, a Brighton native, owned a paper manufacturing business in Newton, and both parents had deep colonial roots.[1][2] He was first educated in the Newton public schools, and then at private schools in Needham and Newton.[1][3] He first clerked at a Boston dry goods stoore, and then apprenticed in the Boston paper distributor Wilkins, Carter, and Company in Boston.[3] In 1840 he entered Union College in Schenectady, New York, graduating as class valedictorian in 1844. He was injured in a fall from a horse in 1844,[1] after which he gave up thoughts of pursuing a career in law, and decided to focus on business.[4]

After his graduation Rice entered into partnership with the proprietors of Wilkins, Carter, forming what eventually became known as the Rice-Kendall Company.[3] The firm owned a large warehouse in Boston, and was one of the leading paper distributors in the city. The warehouse was destroyed in the Great Boston Fire of 1872, but this did not significantly damage the business.[5] The company owned several paper mills in New England, and distributed paper products to newspaper and book publishers nationwide.[6] Rice also invested in paper manufacturing operations, serving as president of both the Keith Paper Company in Turners Falls, Massachusetts and the American Sulphite Pulp Company.[1] 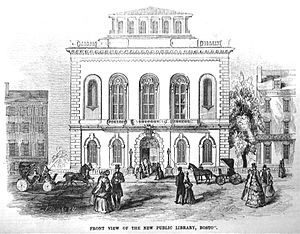 The 1858 Boston Public Library building, constructed during Rice's tenure as Mayor of Boston

In 1853 Rice entered local politics, winning election to City of Boston's Common Council. He served for two years, the second as council president. In 1854 he also served as president of Boston's School Committee.[4]

Rice served as the first Republican mayor of the City of Boston from 1856 to 1857, and a founder of the Republican Party in Massachusetts. During his tenure, the area known as Back Bay was developed.[7]

Rice served in the U.S. House of Representatives from 1859–67, serving as chairman of the Committee on Naval Affairs from 1863–65.[7] He was a conservative Republican, opposed to Radical Republican positions on the abolition of slavery.[8] He introduced the Crittenden Compromise to the House in January 1861; his speech on this last-ditch attempt to prevent civil war received a lukewarm reception.[9] After the war, he was elected as a Third Class Companion of the Military Order of the Loyal Legion of the United States in recognition of his support for the Union.

Rice then left politics, devoting himself to his business interests until 1875, when he ran for Governor of Massachusetts. He served three one-year terms before retiring from politics for good. Rice died at the Langwood Hotel in Melrose, Massachusetts, on July 22, 1895,[10] and was buried at Newton Cemetery.[11]

Rice was married twice. In 1845 he married Augusta McKim, with whom he had three children before her death in 1868. He had one son by his second wife, Angie Erickson Powell of Rochester, New York.[3][12]

Rice's uncle Charles was a brigadier general in the Massachusetts state militia and also served as a state legislator. His grandson Alexander Hamilton Rice, Jr. was a physician and explorer in South America.