Brigadier General Alexander Gore Arkwright Hore-Ruthven, 1st Earl of Gowrie VC GCMG CB DSO* PC (/ˈhɔər ˈrɪvɛn/; 6 July 1872 – 2 May 1955) was a British soldier and colonial governor and the tenth Governor-General of Australia. Serving for 9 years and 7 days, he is the longest serving Governor-General in Australia's history. Prior to his appointment in Australia he was a British Army officer who was the recipient of the Victoria Cross, the highest and most prestigious award for gallantry in the face of the enemy that can be awarded to British and Commonwealth forces.

Alexander Hore-Ruthven was born on 6 July 1872 in Windsor, Berkshire, United Kingdom, as the second son of Walter Hore-Ruthven (1838–1921), the 9th Lord Ruthven of Freeland, and Lady Caroline Annesley Gore (1848–1914), the daughter of Philip Gore, 4th Earl of Arran. After attending Winton House School in Winchester (not Winchester College as is stated in some sources) as a boarder from 1884 to 1885, Hore-Ruthven spent most of his early education at Eton College and then Haileybury and Imperial Service College, where he stayed until 1888, when he was withdrawn owing to eyesight problems and sent into business by his parents. He first worked in a tea merchant's office in Glasgow and then travelled to India to work on a tea plantation in Assam. Hore-Ruthven, however, soon succumbed to malaria and he returned to England in 1892. 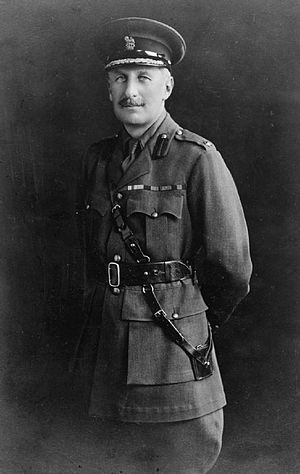 Arkwright after being awarded the Victoria Cross in 1898

On 19 October 1889, Hore-Ruthven was commissioned a second lieutenant in the Lanarkshire Yeomanry Cavalry.[1] After his return to England in 1892, he then joined the regular army. Following training at the United Services College, he was commissioned on 27 April 1893 as a lieutenant in the 3rd Battalion of the Highland Light Infantry, and was promoted to captain on 18 November 1896.[2][3] During the Sudan Campaign, he was mentioned in despatches.[4]

During the action at Gedarif on 22 September 1898, Hore-Ruthven performed an act of courage which earned him the Victoria Cross:

The Queen has been graciously pleased to signify Her intention to confer the decoration of the Victoria Cross on the undermentioned Officer, whose claims have been submitted for Her Majesty's approval, for his conspicuous bravery during the attack on the Baggage Guard at the action of Gedarif on the 22nd September 1898, as recorded against his name:

On the 22nd September 1898, Captain Hore-Ruthven, seeing an Egyptian officer lying wounded within 50 yards of the advancing Dervishes, who were firing and charging, picked him up and carried him towards the 16th Egyptian Battalion. He dropped the wounded officer two or three times and fired upon the Dervishes, who were following, to check their advance. Had the officer been left where he first dropped, he must have been killed [5]

In May 1899, Hore-Ruthven was also awarded the Order of Osmanieh, Fourth Class, by the Sultan of the Ottoman Empire for his services in the Sudan.[6] On 17 May, he received a regular commission as a second lieutenant in the Queen's Own Cameron Highlanders, dropping back two ranks.[7] In late November, he was part of a Camel Corps during the operations leading to the defeat of the Khalifa (mentioned in despatches 25 November 1899[8]). Promoted to supernumerary lieutenant on 14 December 1900, vice a Lieutenant Murdoch killed in action, he fought in the Somaliland Campaign between 1903 and 1904, and was promoted to a regular lieutenancy on 16 April 1904.[9][10]

In 1905, Hore-Ruthven became an aide-de-camp to Lord Dudley, then Lord Lieutenant of Ireland. Transferring to the 1st (King's) Dragoon Guards in 1908, he was promoted to supernumerary captain in that regiment on 11 April, regaining his former rank after nine years.[11] In 1908, Dudley was appointed Governor-General of Australia, and Hore-Ruthven went with him as military secretary. In the same year he married Zara Pollok, with whom he had two sons, one of whom died in infancy. He left Australia in 1910 and returned to military service in India.

On 2 April 1915, Hore-Ruthven transferred to the Welsh Guards and was promoted to major from the same date.[12] He was appointed a GSO 1 on 18 January 1916, with the temporary rank of lieutenant-colonel, and was awarded the DSO on 1 January 1916.[13][14] The citation reads as follows:

He commanded his brigade with conspicuous gallantry and judgment throughout the operations east of Ypres from 28th September to 27th October 1918, inclusive. His presence and personal bearing at critical times during the fighting was of decisive value, especially during a strong enemy counter-attack. On 20th October, at St. Louis, he went forward among the attacking troops at a critical juncture and inspired them to the final effort, whereby the high ground of great tactical value was captured.[15]

During World War I, he served in France and at Gallipoli, where he was severely wounded[22] and Mentioned in Despatches five times. He finished the war as a brigadier-general and commanded British forces in Germany between 1919 and 1920. On 14 December 1920, he was appointed the CO of his regiment, with the temporary rank of colonel, and was promoted to colonel on 5 July 1922 (seniority from 15 October 1921).[23] [24] [25] After this he held various Army staff positions, and received command of a brigade on 1 October 1924 in the temporary rank of colonel-commandant, which had replaced the rank of brigadier-general.[26] when he was knighted as a Knight Commander of the Order of St Michael and St George (KCMG, 24 January 1928) and appointed Governor of South Australia (being sworn in on 14 May 1928).

Hore-Ruthven arrived in Adelaide in May 1928. He took to his duties with enthusiasm, visiting many areas of the State in a de Havilland DH.60 Moth owned by his ADC, Captain Hugh Grosvenor.[27] Together with Lady Hore-Ruthven, he was a keen supporter of the Boy Scout and Girl Guide movements. She was also president of the South Australian Red Cross.[28]

In a 1930 Anzac Day speech, Hore-Ruthven criticised the union movement for exacerbating, through strike action, the hardship suffered by returned servicemen. He was censured by the United Trades and Labour Council in response.[28]

He was on leave in London when the third Bodyline Test cricket match in Adelaide caused Anglo-Australian political tension in 1933, and played a significant part in smoothing relations through his meetings with the British Secretary of State for Dominion Affairs J.H. Thomas.

During Hore-Ruthven's second term as governor, the Great Depression was causing severe hardship in South Australia. The Lionel Hill government, elected on a promise of bringing a "golden future", was heavily criticised when economic realities forced it to adopt austerity measures. Hore-Ruthven supported Premier Hill in the face of criticism from within the Labor party. His speeches frequently expressed the belief that a premier should "rise above party". Hill's firm resolve during the crisis was seen as largely the result of Hore-Ruthven's influence. His performance during the crisis was reportedly a critical factor in his subsequent selection as Governor of New South Wales.[28]

His term as Governor of South Australia ended in April 1934, and he returned to England. He was almost immediately appointed Governor of New South Wales, and at the suggestion of Prime Minister Joseph Lyons was also raised to the peerage as Baron Gowrie of Canberra in the Commonwealth of Australia and of Dirleton in the County of East Lothian. He arrived in Sydney on 21 February 1935. However he had already been approached by King George V regarding appointment as Governor-General while in England (after the 2nd Marquess of Linlithgow, son of the inaugural governor-general Lord Hopetoun, declined the post). He was raised to Knight Grand Cross of the Order of St Michael and St George (GCMG) on 20 December 1935.[28]

With his military record and experience, Gowrie was seen as an obvious choice to succeed Sir Isaac Isaacs when he retired as Governor-General in 1936. In accordance with established practice Prime Minister Joseph Lyons was offered several alternatives, but Lyons had no intention of recommending another Australian to the post. At the time, non-Labor Prime Ministers always appointed British Governors-General. In accordance with Australian constitutional practice, he was formally appointed by King George V, who died on 20 January 1936, three days before Gowrie was due to be sworn in as Governor-General. Thus he came to office during the reign of King Edward VIII.

Gowrie signing the declaration of War against Japan with Prime Minister John Curtin looking on.

In office, Gowrie was a popular if unobtrusive figure in Australia. The days when Governors-General exercised significant power, or even participated in negotiations between the Australian and British governments, had now passed, but Gowrie set a precedent in 1938 when he toured the Netherlands East Indies at the invitation of the colonial administration. This was the first time that a Governor-General had represented Australia abroad.

In April 1939 Lyons died suddenly and Gowrie commissioned Sir Earle Page, the leader of the Country Party, as Prime Minister until the United Australia Party could choose a new leader: this was the only circumstance in which the Governor-General still had some personal discretion.

Gowrie's political skills were tested again after the 1940 election, which left the UAP Prime Minister, Robert Menzies, dependent on the votes of two independent members to stay in power. When the UAP forced Menzies out as leader, it was so bereft of leadership that Country Party leader Arthur Fadden was named Prime Minister, even though the UAP was the senior coalition partner. However, the independents were so outraged at how Menzies had been treated that they joined Labor in voting against Fadden's budget and brought the government down. Gowrie was reluctant to call an election for a Parliament just over a year old, especially given the international situation. However, he didn't see another alternative if Labor leader John Curtin didn't have enough support to govern. He therefore summoned the two independents to Yarralumla and made them promise that if he commissioned Curtin as Prime Minister, they would support him and end the instability in government. The independents agreed, and Gowrie duly appointed Curtin. After some initial uneasiness perhaps inevitable with two such contrasting characters, the vice-regal aristocrat and the tough ALP boss got on well.

During World War II Gowrie saw it as his duty to support the government and the British Empire, and also the troops. In 1943 he undertook a four-week tour of inspection of Allied Defence Forces in northern Australia and New Guinea. Shortly before undertaking this tour, Gowrie and his wife had learned that their son, Patrick, had been killed in Libya the previous year.

He officially opened the Australian War Memorial on 11 November 1941.

Gowrie's term ended in September 1944 after which he returned to Britain, where he was created Viscount Ruthven of Canberra, of Dirleton in the County of East Lothian, and Earl of Gowrie and appointed Deputy Constable and Lieutenant-Governor of Windsor Castle. In 1948 he was elected president of the Marylebone Cricket Club. He died in May 1955 at his home in Gloucestershire.

He was the only Governor-General of Australia to be advised by five different Prime Ministers (Lyons, Page, Menzies, Fadden and Curtin), although two (Page and Fadden) were short-term appointments. 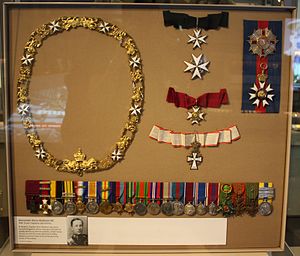 Hore-Ruthven's orders, medals and decorations on display in the Ashcroft Gallery at the Imperial War Museum