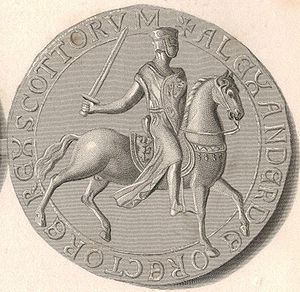 Alexander the warrior and knight: the reverse side of Alexander II's Great Seal, enhanced as a 19th-century steel engraving. Legend: ALEXANDER DEO RECTORE REX SCOTTORUM (Alexander, with God as his guide, king of the Scots)

He was born at Haddington, East Lothian, the only son of the Scottish king William the Lion and Ermengarde of Beaumont. He spent time in England (John of England knighted him at Clerkenwell Priory in 1213) before succeeding to the kingdom on the death of his father on 4 December 1214, being crowned at Scone on 6 December the same year.

In 1215, the year after his accession, the clans Meic Uilleim and MacHeths, inveterate enemies of the Scottish crown, broke into revolt; but loyalist forces speedily quelled the insurrection. In the same year Alexander joined the English barons in their struggle against John of England, and led an army into the Kingdom of England in support of their cause. This action led to the sacking of Berwick-upon-Tweed as John's forces ravaged the north.

The Scottish forces reached the south coast of England at the port of Dover where in September 1216, Alexander paid homage to the pretender Prince Louis of France for his lands in England, chosen by the barons to replace King John. But John having died, the Pope and the English aristocracy changed their allegiance to his nine-year-old son, Henry, forcing the French and the Scots armies to return home.[1]

Peace between Henry III, Louis of France, and Alexander followed on 12 September 1217 with the treaty of Kingston. Diplomacy further strengthened the reconciliation by the marriage of Alexander to Henry's sister Joan of England on 18 June or 25 June 1221.

The next year marked the subjection of the hitherto semi-independent district of Argyll. Royal forces crushed a revolt in Galloway in 1235 without difficulty;[1] nor did an invasion attempted soon afterwards by its exiled leaders meet with success. Soon afterwards a claim for homage from Henry of England drew forth from Alexander a counter-claim to the northern English counties. The two kingdoms, however, settled this dispute by a compromise in 1237. This was the Treaty of York which defined the boundary between the two kingdoms as running between the Solway Firth (in the west) and the mouth of the River Tweed (in the east).

Joan died in March 1238 in Essex. Alexander married his second wife, Marie de Coucy, the following year on 15 May 1239. Together they had one son, the future Alexander III, born in 1241.

A threat of invasion by Henry in 1243 for a time interrupted the friendly relations between the two countries; but the prompt action of Alexander in anticipating his attack, and the disinclination of the English barons for war, compelled him to make peace next year at Newcastle. Alexander now turned his attention to securing the Western Isles, which still owed a nominal allegiance to Norway. He repeatedly attempted negotiations and purchase, but without success.[1]

The English chronicler Matthew Paris in his Chronica Majora described Alexander as red-haired:

"[King John] taunted King Alexander, and because he was red-headed, sent word to him,
saying, 'so shall we hunt the red fox-cub from his lairs."[2]

Alexander attempted to persuade Ewen, the son of Duncan, Lord of Argyll, to sever his allegiance to Haakon IV of Norway. When Ewen rejected these attempts, Alexander sailed forth to compel him, but on the way he suffered a fever at the Isle of Kerrera in the Inner Hebrides. He died there in 1249 and was buried at Melrose Abbey, Roxburghshire. His only legitimate child and son, by his second wife, Alexander III succeeded him as King of Scots. He had a bastard daughter, Marjorie, who married Sir Alan Durward, Justiciar of Scotia (he died 1275), and had issue.[3]

Alexander II has been depicted in historical novels. :