Alexander L. Kielland was a Norwegian semi-submersible drilling rig that capsized while working in the Ekofisk oil field in March 1980, killing 123 people.

The capsize was the worst disaster in Norwegian waters since World War II. The rig, located approximately 320 km east of Dundee, Scotland, was owned by the Stavanger Drilling Company of Norway and was on hire to the U.S. company Phillips Petroleum at the time of the disaster. The rig was named after the Norwegian writer Alexander Lange Kielland.

The rig was built as a mobile drilling unit at a French shipyard, and delivered to Stavanger Drilling in July 1976. The floating drill rig was not used for drilling purposes but served as a semi-submersible 'flotel' providing living quarters for offshore workers. By 1978, additional accommodation blocks had been added to the platform, so that up to 386 persons could be accommodated.[1]

In 1980, the platform was working in the Norwegian north sea providing offshore accommodation for the production platform Edda 2/7C. 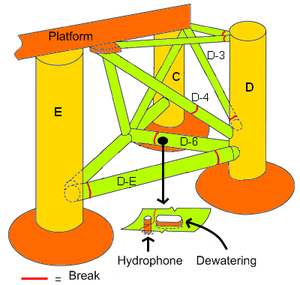 Fractures on the right side of the rig

In driving rain and mist, early in the evening of 27 March 1980 more than 200 men were off duty in the accommodation on Alexander L. Kielland. The wind was gusting to 40 knots (74 km/h) with waves up to 12 m high. The rig had just been winched away from the Edda production platform.

Minutes before 18:30, those on board felt a 'sharp crack' followed by 'some kind of trembling'. Suddenly the rig heeled over 30° and then stabilised. Five of the six anchor cables had broken, the one remaining cable preventing the rig from capsizing. The list continued to increase and at 18:53, the remaining anchor cable snapped and the rig capsized.

130 men were in the mess hall and the cinema. The rig had seven 50-man lifeboats and twenty 20-man rafts. Four lifeboats were launched, but only one managed to release from the lowering cables. (A safety device did not allow release until the strain was removed from the cables.) A fifth lifeboat came adrift and surfaced upside down; its occupants righted it and gathered 19 men from the water. Two of Kielland's rafts were detached and three men were rescued from them. Two 12-man rafts were thrown from Edda and rescued 13 survivors. Seven men were taken from the sea by supply boats and seven swam to Edda.

No-one was rescued by the standby vessel, which took an hour to reach the scene.

Of the 212 people aboard 123 were killed, making it the worst disaster in Norwegian offshore history since WWII. Most of the workers were from Rogaland.

File:Kielland ulykken.jpg
Part of the bracing that failed during the accident (on display in the Norwegian Petroleum Museum)

In March 1981, an investigative report concluded that the rig collapsed due to a fatigue crack in one of its six bracings (bracing D-6), which connected the collapsed D-leg to the rest of the rig.[2] This was traced to a small 6mm fillet weld which joined a non-load-bearing flange plate to this D-6 bracing. This flange plate held a sonar device used during drilling operations. The poor profile of the fillet weld contributed to a reduction in its fatigue strength. Further, the investigation found considerable amounts of lamellar tearing in the flange plate and cold cracks in the butt weld. Cold cracks in the welds, increased stress concentrations due to the weakened flange plate, the poor weld profile, and cyclical stresses (which would be common in the North Sea), seemed to collectively play a role in the rig's collapse.

The rig was recovered in 1983 at the third attempt. The rig was scuttled later that year in the Nedstrand Fjord after a search for missing bodies had been completed, as well as several tests to determine the cause of the disaster. The fatigue crack had grown over time from a hydrophone port in the bracing tube. Judging by paint on part of the fractured surface the crack was probably due to improper labour at the plant in Dunkirk, France, where the rig was built in 1976. Other major structural elements then failed in sequence, destabilising the entire structure. The design of the rig was flawed owing to the absence of structural redundancy.

In response to the Alexander L. Kielland disaster, North Sea offshore installations tightened their command organization, identifying a clear authority who would order abandonment in case of emergency. The 14 minutes between initial failure of the leg and the rig's eventual capsize left a window in which most of the personnel on board could have escaped, had a more effective command structure been in place. These revised command structures, similar to conventional shipping command structures, are now frequently put into use when vessels lose anchorage in storm conditions or when fixed installations are threatened by out-of-control vessels.

Not long after Alexander L. Kielland capsized, her sister rig, Henrik Ibsen, suffered a jammed ballast valve, causing her to list twenty degrees, but was later righted again.[3] Approximately 18 months later, Ocean Ranger capsized in similar weather conditions off the Newfoundland coast. An investigation into the cause of the Ocean Ranger disaster by the US Coast Guard established that structural failure was not a factor.

The Drillmaster was a drilling rig of the same design and construction as the Alexander L. Kielland. Originally built in 1973 by CFEM in Le Havre, France, it was converted into a semi-submersible floating oil production platform in 1980. In 1981, it began production in the Buchan template of the North Sea (UK Block 21/01). As such, the platform was renamed 'Buchan Alpha'. Today, the platform continues to produce oil under the ownership of Talisman Energy and is subject to round-the-clock brace inspections and acoustic emission monitoring, ensuring that any potential fatigue crack initiation is detected immediately.