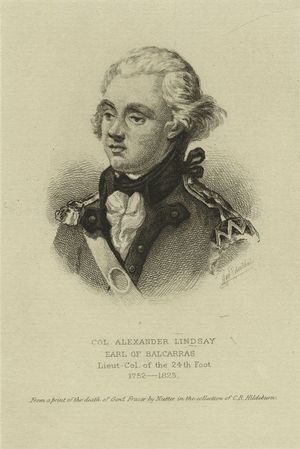 He entered the army at the age of fifteen as an ensign, in the 53rd Regiment of Foot. After attending Eton College, he studied at the University of Göttingen for two years, and subsequently purchased a captaincy in the 42nd Highland Regiment in 1771. In 1777, he was appointed a major of the 53rd, and he commanded the light infantry companies at the Battle of Saratoga (1777), and surrendered there with Burgoyne. He was released from captivity in 1779.

Around this time he founded the famous Haigh Ironworks with his partners, his brother Robert and James Corbett.

On 1 June 1780, he married his first cousin, Elizabeth Bradshaigh Dalrymple, who had inherited Haigh Hall, in Haigh near Wigan,[1] Lancashire. They had five children:

Promoted lieutenant-colonel of the 42nd during his imprisonment, he was subsequently promoted to the rank of colonel and made lieutenant-colonel commandant of the second 71st Regiment of Foot,[2] a battalion of the 71st uninvolved in the surrender at Yorktown (as was the rest of the regiment). He was chosen a representative peer for Scotland in 1784, and was re-elected through 1807, inclusive. On 27 August 1789 he was appointed colonel of the 63rd Regiment of Foot, and was promoted major-general in 1793.

Governor of Jersey from 1793 to 1794, he was then appointed Governor of Jamaica. He was promoted lieutenant-general in 1798, and resigned the governorship in 1801. On 25 September 1803 he was promoted to general.

After his return from the American Revolution, he was introduced to Benedict Arnold (who had led several gallant attacks on his position at Saratoga). Balcarres snubbed Arnold as a traitor, and a duel ensued, neither party being injured. After being maimed in an accident he retired to the family's second home at Haigh Hall, near Wigan. On his death he was succeeded by his eldest son James, the 7th Earl. After James had successfully pressed his claim to the title of Earl of Crawford in 1848, the title was conferred posthumously on Alexander, even though he had not claimed it himself.

His younger son, Edwin Lindsay, an Indian army officer, was declared insane after refusing to fight in a duel and was sent to Papa Stour in the Shetland islands. He spent 26 years there as a prisoner before the Quaker preacher Catherine Watson arranged for his release in 1835.[3][4]

His memorial, in the Crawford chapel of Wigan Parish Church, reads:

"Alexander VIIth Earl of Balcarres Lord Lindsay and Balneill born 18 Jan 1750 General in the army and Governor of Jersey and Jamaica during the revolutionary War succeeded as XXIIIth Earl of Crawford in 1808 died 25 March 1825 and lies buried in this chapel “Except the Lord build the house they labour in vain that build it”.[5]