Alexander Macomb (April 3, 1782 – June 25, 1841) was the Commanding General of the United States Army from May 29, 1828 until his death on June 25, 1841. Macomb was the field commander at the Battle of Plattsburgh during the War of 1812 and, after the stunning victory, was lauded with praise and styled "The Hero of Plattsburgh" by some of the American press. He was promoted to Major General for his conduct, receiving both the Thanks of Congress and a Congressional Gold Medal.

Born at British-held Detroit, Macomb was the son of Alexander Macomb and Mary Catherine Navarre.[2]

He moved with his parents to New York City and received a classical education at Newark Academy, in New Jersey.[3]

In 1798, the age of 16, Macomb joined a New York militia company. In January 1799, with the recommendation of Alexander Hamilton during the French emergency, he was commissioned a Cornet in the Regular Army.[3] In March he was promoted to second lieutenant, and honorably discharged, June 1800.

In February 1801, he was commissioned a second lieutenant, 2d Infantry, serving as secretary to a commission that treated with the Indians of the Southeast.

He was commissioned a first lieutenant in the Army Corps of Engineers, which was established in 1802 at West Point to constitute a military academy, thereby being one of the first officers to receive formal training there.[3]

He then spent five years in charge of coastal fortifications in the Carolinas and Georgia. He also established fortifications at Fort Gratiot, Michigan, Chicago, Mackinaw, Prairie du Chien, St. Peter's, and St. Mary's.[4]

At the beginning of the War of 1812, in July 1812, then 30-year-old Macomb was promoted to colonel of the newly organised 3rd Artillery Regiment.

Command at the Battle of Plattsburgh

He won acclaim during the War of 1812 as brigadier general in command of the frontier of northern New York. At the Battle of Plattsburgh on September 11, 1814, with only 1,500 regular troops and some detachments of militia, he was opposed by a British force of 10,531 men under Lieutenant General Sir George Prevost. Macomb's heavily outnumbered troops fell back before the British columns in a series of encounters as Prevost advanced towards the American defensive works. In the weeks leading up to the battle, Macomb, knowing full well he would be outnumbered heavily, worked with his men to move trees and create fake roads in order to obscure the genuine roads and lead the British into dead-end traps far from the three nearby American forts (a maneuver Macomb called abattis).[5] The British attack was diffused. Long narrow lines of marching soldiers were unable to easily stop and about-face. They became entangled in the narrow false road maze, and were sitting targets for the waiting Americans. The British were about to launch an assault on the American defenses when the news came through of the defeat of the British naval squadron on Lake Champlain. Prevost needed the British Lake Champlain squadron to supply his planned advance into Vermont. Without it, he had no choice but to abandon the Expedition. The British invaders marched off back to Canada. Although Commodore Thomas Macdonough's sailors and not the Army had been largely responsible for stopping the British invasion,[citation needed] Macomb was nevertheless showered with praise and styled "the Hero of Plattsburgh" by some in the American press. He was promoted Major General for his conduct at this battle, receiving both the thanks of Congress and a Congressional Gold Medal.

When Major General Jacob Brown, the U.S. Army’s commanding general, died in February 1828, Macomb was the senior Brigadier-General on the Army List, and President John Quincy Adams promoted him to substantive Major-General as was Macomb's right.[6] The Army's 2nd and 3rd-ranking Brigadier-Generals — Winfield Scott and Edmund P. Gaines — bitterly contested this. They denounced each other publicly and for months had been vying for the position.[3] Their quarrels scandalized the Army and drove Adams to nominate Alexander Macomb, the Chief of Engineers (who by then had reverted to the rank of colonel), as the Army’s top general.

His last active service in a theater of war was in the Seminole War in Florida, in 1835.[7]

Macomb’s tenure as Commanding General was marked by "continuing uncertainty about the responsibilities and authority of his position. To secure his seniority over the other two-star brevet major generals, Macomb added a provision in the 1834 regulations that 'the insignia of the major general commanding in chief should be three stars.' In the same document he sought to define his relationship to the Secretary of War and establish his primacy over the bureau chiefs, including his successor as Chief of Engineers. This was easier said than done. Most issues were not fully resolved until early the next century."[8]

He advocated doubling Army strength, increasing enlisted pay, providing relief for some widows and orphans, and regularizing the officer retirement and replacement system. In 1840 the Army Corps of Engineers adopted the castle uniform insignia and first described the Corps of Engineers’ distinctive Essayons (Motto: "Let us try") button.[3][9]

In 1809 and 1841, Macomb was the author of a seminal book (republished in the 21st century) on the conduct of courts-martial and martial law.[10] He also wrote a play on Pontiac's siege of Detroit, which features his maternal grandfather, Robert Navarre. See Published Works and Further Reading, infra.

Macomb was the first of five Commanding Generals (Chiefs of Staff after the 1903 reorganization) who had held Engineer commissions early in their careers. All transferred to other branches before rising to the top. The others were George B. McClellan, Henry W. Halleck, Douglas MacArthur, and Maxwell D. Taylor. 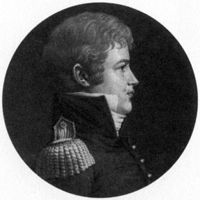 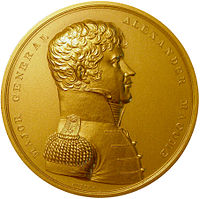 Following the Battle of Plattsburgh and the end of the War of 1812, a Congressional Gold Medal honoring Alexander Macomb and his men was struck by Act of Congress (3 Stat. 247), to wit:[11]

Resolved, That the thanks of Congress[12] be, and they are hereby presented to Major General Macomb, and, through him, to the officers and men of the regular army under his command, and to the militia and volunteers of New York and Vermont, for their gallantry and good conduct, in defeating the enemy at Plattsburg (sic) on the eleventh of September; repelling, with one thousand five hundred men, aided by a body of militia and volunteers from New York and Vermont, a British veteran army, greatly superior in number, and that the President of the United States be requested to cause a gold medal to be struck, emblematic of this triumph, and presented to Major General Macomb. – Resolution of Congress November 3. 1814.[13]

Obverse: MAJOR GENERAL ALEXANDER MACOMB. Bust of Gen. Macomb, in uniform, facing the right FÜRST. F(ecit). indicates the engraver Moritz Fuerst (1782–1840), who designed several medals of 1812 heroes for the Philadelphia mint. The bust of Macomb found on the Congressional Medal, however, is reminiscent of the 1809 portrait of Macomb by Saint-Mémin (1770–1852), in which Macomb is wearing the undressed coat of blue with black velvet collar and cuffs typical of an Engineering officer.

Reverse: RESOLUTION OF CONGRESS NOVEMBER 3. 1814. The American army repulsing the British troops, who are striving to cross the Saranac river. To the left, Plattsburgh in flames; to the right, naval battle on Lake Champlain; in the distance, Cumberland Head. Exergue: BATTLE OF PLATTSBURGH September 11. 1814. FÜRST. F(ecit).[14] See the reverse.

This was one of 27 Gold Medals authorized by Congress arising from the War of 1812.[15]

Alexander Macomb is recognized in a Michigan Historical Marker that is situated at the corner of Gratiot Avenue and Macomb Street in Mount Clemens, Michigan. It is Registered Site S0418, erected in 1974.[16] It states: 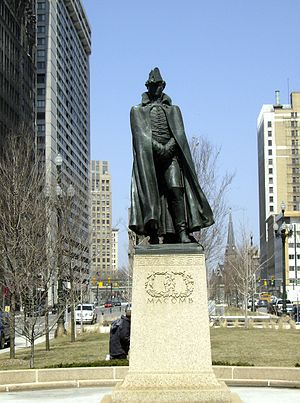 Alexander Macomb In 1818 Territorial Governor Lewis Cass proclaimed the third Michigan county to be called Macomb. At that time the young General was Commander of the Fifth Military Department in Detroit. Born in that city in 1782, son of prominent local entrepreneurs, Macomb had entered the U.S. Army in 1799. He had gained national renown and honor during the War of 1812 for his victory at Plattsburgh in September 1814 over a far superior force of British invaders. Later as Chief Army Engineer he promoted the building of military roads in the Great Lakes area. From May 1828 to his death in June 1841, Macomb served as Commander in Chief of the Army. He is buried in the Congressional Cemetery in Washington D.C. His birthday, April 3, is honored as Macomb County Heritage Day.

He is recognized in several statues. One was sculpted by Adolph Alexander Weinman and erected in 1906 in downtown Detroit, Michigan.[18] This statue was made from melted down cannons, and was a notable and monumental task.[19] Another is in downtown Mount Clemens, Michigan in front of the Circuit Court building at 40 N. Gratiot Avenue. Several others exist.[20] 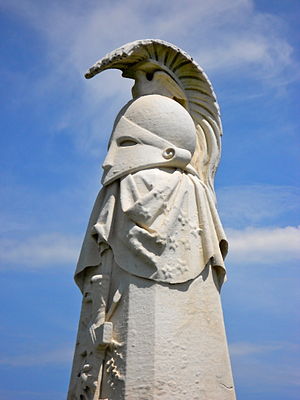 Grave in the Congressional Cemetery

Macomb died while in office at Washington, D.C. He was originally buried at the Presbyterian Burying Ground, but in 1850 his remains were disinterred and he was reburied at Congressional Cemetery.[21][22] His remains, and those of his wife, Catherine, were disinterred again in June, 2008 so that the brick-lined burial vault beneath their 6 ton, 13-foot-tall marble monument could be repaired to prevent its impending collapse. During the month it took to make the necessary repairs, the couple's remains were kept at the Smithsonian and were viewed by several of the general's descendants including his great-great-great granddaughter. After the $24,000 repairs were completed by the Department of Veterans Affairs, their remains were re-interred on July 17, 2008.[23][24] The monument to Alexander Macomb is "one of the most unusual in the nation."[25]

Major General Winfield Scott was named his successor, after working "hard at mending fences in the intervening 13 years . . ."[8]

Although an amateur, Macomb is recognized as an artist. His painting Detroit as Seen from the Canadian Shore in 1821 is a watercolor and pencil in the collection of the Detroit Institute of Arts.[26]

During the 1820s, Macomb was a member of the prestigious society, Columbian Institute for the Promotion of Arts and Sciences, who counted among their members former presidents Andrew Jackson and John Quincy Adams and many prominent men of the day, including well-known representatives of the military, government service, medical and other professions.[27]

In addition to the ship, Alexander Macomb has been the source for the name of a number of communities and institutions around the country, including:

Macomb's effective dates of rank were:[34]