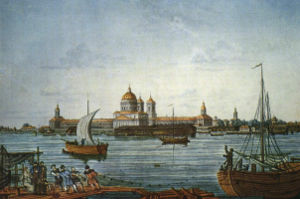 View of the monastery in the early 19th century 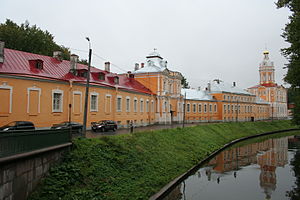 "The relics of St. Alexander Nevsky were solemnly transferred from Vladimir to the new capital of Russia September 12, 1724 by decree of Peter the Great."[3] Nevsky bcame patron of the newly founded Russian capital; however, the massive silver sarcophagus of St. Alexander Nevsky[4] was relocated during Soviet times to the State Hermitage Museum where it remains (without the relics) today.

In 1797, the monastery was raised to the rank of lavra, making it only the third lavra in the Russian Orthodox Church that had that designation bestowed upon it, following only the Kiev Monastery of the Caves and the Trinity Monastery of St Sergius.

Today Alexander Nevsky Lavra sits on Alexander Nevsky Square, where shoppers can buy bread baked by the monks. Visitors may also visit the cathedral and cemeteries for a small admission fee. While many of the grave sites are situated behind large concrete walls, especially those of famous Russians, many can be seen by passers-by while strolling down Obukovskoy Oburony Street.