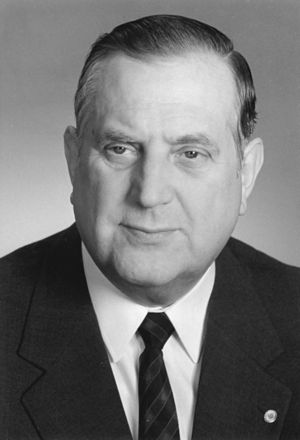 Alexander Schalck-Golodkowski (July 3, 1932 – June 21, 2015) was a politician and trader in the German Democratic Republic. He was director of a main department ('Hauptverwaltungsleiter') in the Ministry for Foreign Trade and German Domestic Trade (1956–62), the Deputy Minister for External Trade (1967–75), and head of the GDR's Kommerzielle Koordinierung (KoKo, 1966–86).[1]

He was born in Berlin to a stateless ethnic Russian father and adopted by the Schalcks when he was eight years old. His biological father served as a Tsarist officer in World War I and became the head of the Wehrmacht's Russian language interpreter school in World war II; he did not return from Soviet captivity. His maternal grandfather worked for Stinnes in St. Petersburg.[2]

Schalck-Golodkowsky joined the Free German Youth in 1951 and the Socialist Unity Party of Germany (Sozialistische Einheitspartei Deutschlands, SED) in 1955.

In 1983 he led the negotiations with Bavarian leader Franz Josef Strauß to obtain a billion Deutschmarks loan from the West German government.

He was appointed to the central committee of the SED in 1986 and, under suspicion of misusing his powers at KoKo he fled to West Berlin in December 1989. He was briefly imprisoned before settling in Bavaria.

The actions of KoKo and of Schalck-Golodkowski as its head were investigated from 1991 on suspicion of espionage activities, tax evasion, fraud, breaking embargo regulations and offence against Allied military law. He was prosecuted in 1996 for breaking Allied law and sentenced to a year's probation, other charges were withdrawn due to his ill-health—he had operations to remove cancers in 1987 and 1997

He had been married twice and had two children.