Alexander Sims (born 15 March 1988, in London) is a British racing driver. He currently resides in West Wratting . Sims is currently racing in GP3 Series with Status Grand Prix. He was the winner of the 2008 McLaren Autosport BRDC Award for promising young British drivers. He wears an Ayrton Senna inspired helmet with yellow and a blue and a green stripe.

Having started his car racing career in late 2006, Sims scored a second place in his first ever car race in the Formula Renault UK 2.0 Winter Series, before finishing ninth in the championship standings. In 2007, Sims raced in the main series with Manor Competition. He finished eighth overall, after taking one win at Donington Park, and second places at Brands Hatch and Thruxton. He also forayed into the French and Northern European Cup championships during the season and added his first pole position in the category, at Val de Vienne during the French championship. Sims also contested the 2007 UK Winter Series, but failed to finish in three of the four races.

Sims remained with Manor Competition in Formula Renault UK for 2008, and challenged for the championship. Finishing every race, Sims actually scored the most points over the course of the championship, with 473. However, Formula Renault UK employs a points system that means that a driver must drop their two worst scores over the season. Unfortunately for Sims, his worst scores were a pair of ninths worth 24 points, and Adam Christodoulou, his main championship rival dropped two retirements. Thus, a 24-point swing resulted in Christodoulou turning a one-point deficit into a 23-point championship win. He also contested the final round of the Formula BMW Pacific in Macau, finishing sixth with fastest lap. In December 2008, Sims won the McLaren Autosport BRDC Award. 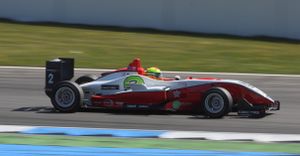 Sims competing at the second round of the 2010 Formula 3 Euro Series at Hockenheim.

At the 2008 Autosport Awards ceremony, Sims announced his plans to race with German team Mücke Motorsport in the Formula 3 Euro Series.[1] In a season dominated by Jules Bianchi, Sims took fourth place in the championship, with a win at the Nürburgring and four second places. He also took part in two rounds of the International Formula Master series, with two fourth places at the Hungaroring being his best results. For 2010, Sims will move to ART Grand Prix.[2]

* Season still in progress.
† As Sims was a guest driver, he was ineligible for points.

† Driver did not finish the race, but was classified as he completed over 90% of the race distance.
‡ As Sims was a guest driver, he was ineligible for championship points.

‡ As Sims was a guest driver, he was ineligible for championship points.