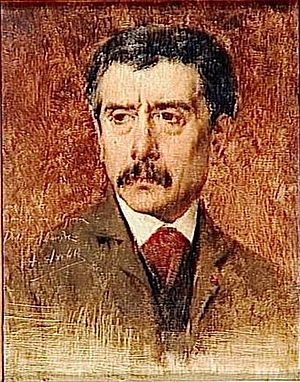 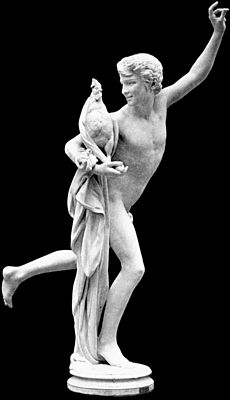 Falguière was born in Toulouse. A pupil of the École des Beaux-Arts, he won the Prix de Rome in 1859; he was awarded the medal of honor at the Paris Salon in 1868 and was appointed Officer of the Legion of Honor in 1878.

Falguière's first bronze statue of importance was Le Vainqueur au Combat de Coqs (Victor of the Cockfight) (1864), and Tarcisius the Christian Boy-Martyr followed in 1867; both were exhibited in the Luxembourg Museum and are now in the Musée d'Orsay.[1] His more important monuments are those to Admiral Courbet (1890) at Abbeville and the famous Joan of Arc. Other works include Eve (1880), Diana (1882 and 1891), Woman and Peacock (a. k. a. Juno and The Peacock), and The Poet, astride his Pegasus spreading wings for flight. He sculpted The Dancer, based on Cléo de Mérode which today is also in the Musée d'Orsay. In 1870 he helped create the snow sculpture, La statue de la Résistance.[2]

Falguière's Triumph of the Republic (1881–86) is a vast quadriga for the Arc de Triomphe.

To these works should be added his monuments to Cardinal Lavigerie and to General de La Fayette (in Washington, DC), and his statues of Alphonse de Lamartine (1876) and St Vincent de Paul (1879), as well as the Honoré de Balzac, which he executed for the Société des gens de lettres on their rejection of that by Auguste Rodin; and the busts of Carolus-Duran and Ernest Alexandre Honoré Coquelin (1896).

Falguière was a painter as well as a sculptor, but somewhat inferior in merit. He displays a fine sense of colour and tone, added to the qualities of life and vigour that he instils into his plastic work. His Wrestlers (1875) and Fan and Dagger (1882; a defiant Spanish woman) were in the Luxembourg, and other pictures of importance are The Beheading of St John the Baptist (1877), The Sphinx (1883), Acis and Galatea (1885), Old Woman and Child (1886) and In the Bull Slaughter-House.

Falguière became a member of the Institut de France (Académie des Beaux-Arts) in 1882.

Falguière died in Paris in 1900 and was interred there in the Père Lachaise Cemetery, where his monument is by his pupil Marqueste.