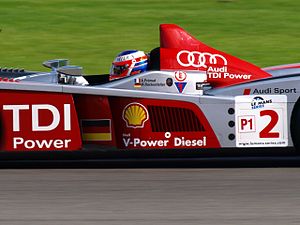 Prémat in the cockpit of an Audi R10 TDI en route to winning the 2008 Le Mans Series Drivers Championship.

Born in Juvisy-sur-Orge, Essonne, Prémat started his motorsport career in karting at the age of 10. In 1998 the French driver became champion in «Ile-de-France». In 2000 he finished as runner-up in 125cc ICC European Championship.

He continued karting until 2000 when he moved up to French Formula Campus, a common starting point for Formula drivers from France.

He quickly moved up to French Formula Renault in 2001, and after familiarising himself with the series, won the title in 2002. In 2002 he also raced in part of the Formula Renault 2000 Eurocup.

With the merger of several national Formula Three championships in 2003, Prémat moved to the resultant Formula Three Euroseries, driving for the ASM team with Olivier Pla, another driver who raced in the inaugural GP2 season. He stayed there for the 2004 season, also winning the prestigious Macau Grand Prix and Marlboro Masters non-championship races. 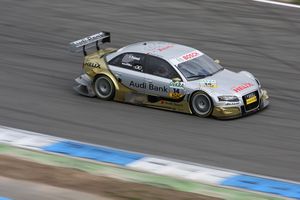 Prémat driving for Audi (Phoenix) at the Hockenheimring during the 2008 Deutsche Tourenwagen Masters season.

This earned him a drive in the 2005 GP2 Series, for ART Grand Prix, the team ran by Nicolas Todt. He was behind team-mate Nico Rosberg, but was the highest-place second driver in the championship. Alex remained, alongside the young British driver Lewis Hamilton for 2006, though he was overshadowed, as he finished third whilst Hamilton took the honours.

Prémat also drove the A1 Team France car in A1 Grand Prix in the 2005–06 season, he and team-mate Nicolas Lapierre winning the title for their nation. Alex did not return to the series for the following season, and the French team's form dropped noticeably.

Prémat drove the third Spyker MF1 Racing car at the 2006 Chinese Grand Prix.[1] He also had an off-season test with Champ Car team Mi-Jack Conquest Racing. Prémat had the quickest time in several sessions and stated that he was targeting a ride in Champ Cars for 2007.[2] Another possibility was to drive in Formula One with Spyker, as one of their test drivers, but it did not work out.[3]

Eventually he drove for Audi in the 2007 DTM series and participated in the 24 Hours of Le Mans, also with Audi. In 2008 Prémat again raced in DTM, and also the Le Mans Series with Audi. In 2009 French driver remained in this series and also participated in 24 Hours of Le Mans. He was fired by Audi before the final race of the 2010 season for running in the New York Marathon instead of recovering from a heavy crash at the previous round.[4] In 2011 he won his class of the Nürburgring 24 Hour race in a Peugeot RCZ. 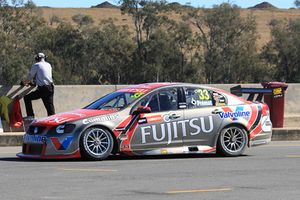 In 2012, Prémat joined the Australian V8 Supercar series, driving for Garry Rogers Motorsport.[5][6] after a disappointing first half of the season, where he struggled to adapt to the championship, he was rested for the Gold Coast 600, with Greg Ritter taking his place. He returned racing at the following round in Abu Dhabi,[7] and went on to finish the season with a best result of thirteenth place at Symmons Plains Raceway.

Prémat remained with the team in 2013, starting the season with fourth place in the 2013 Clipsal 500 Adelaide and showing frontrunning pace in the races at the start of the season but without results due to problems in races and poor qualifying.

On 6 January 2014 Prémat announced he was leaving the team,[8] however he would return for the endurance events,[9] placing 5th in the Endurance Cup with full-time driver Scott McLaughlin.

Prémat will return to V8 Supercars to team with Scott McLaughlin in the #33 Volvo Polestar S60 for the Pirtek Endurance Cup events at Sandown, Bathurst and the Gold Coast in 2015.