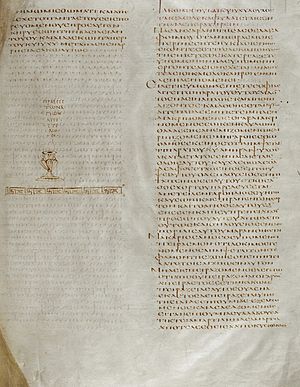 The end of the book of Acts (folio 76r) from the Codex Alexandrinus, which has a mostly Byzantine text-type during the Gospels and is largely Alexandrian throughout the rest of the New Testament

The Alexandrian text-type (also called Neutral or Egyptian), associated with Alexandria, is one of several text-types used in New Testament textual criticism to describe and group the textual character of biblical manuscripts.

The Alexandrian text-type is the form of the Greek New Testament that predominates in the earliest surviving documents, as well as the text-type used in Egyptian Coptic manuscripts. In later manuscripts (from the 9th century onwards), the Byzantine text-type became far more common and remains as the standard text in the Greek Orthodox church and also underlies most Protestant translations of the Reformation era.

Most modern New Testaments are based on what is called "reasoned eclecticism", such as that of the Nestle-Aland 27, in formulating a Greek text. This invariably results in a text that is strongly Alexandrian in character.[1]

Manuscripts of the Alexandrian text-type

Up until the 9th century, Greek texts were written entirely in upper case letters, referred to as Uncials. During the 9th and 10th centuries, the new lower-case writing hand of Minuscules came gradually to replace the older style. Most Greek Uncial manuscripts were recopied in this period and their parchment leaves typically scraped clean for re-use. Consequently, surviving Greek New Testament manuscripts from before the 9th century are relatively rare; but nine — over half of the total that survive — witness a more or less pure Alexandrian text. These include the oldest near-complete manuscripts of the New Testament Codex Vaticanus Graecus 1209 and Codex Sinaiticus (believed to date from the early 4th century CE).

A number of substantial papyrus manuscripts of portions of the New Testament survive from earlier still, and those that can be ascribed a text-type — such as

75 from the early 3rd century — also tend to witness to the Alexandrian text.

The earliest translation of the New Testament into an Egyptian Coptic version — the Sahidic of the late 2nd century — uses the Alexandrian text as a Greek base; although other 2nd and 3rd century translations — into Old Latin and Syriac tend rather to conform to the Western text-type. Although the overwhelming majority of later minuscule manuscripts conform to the Byzantine text-type; detailed study has, from time to time, identified individual minuscules that transmit the alternative Alexandrian text. Around 17 such manuscripts have been discovered so far — consequently the Alexandrian text-type is witnessed by around 30 surviving manuscripts — by no means all of which are associated with Egypt, although that area is where Alexandrian witnesses are most prevalent.

It was used by Clement,[2] Athanasius, and Cyril of Alexandria.

According to the present critics codices

75 and B are the best Alexandrian witnesses, which present the pure Alexandrian text. All other witnesses are classified according to whether they preserve the excellent

75-B line of text. With the primary Alexandrian witnesses are included

66 and citations of Origen. With the secondary witnesses are included manuscripts C, L, 33, and the writings of Didymus the Blind.[4]

Characteristics of the Alexandrian text-type

All extant manuscripts of all text-types are at least 85% identical and most of the variations are not translatable into English, such as word order or spelling. When compared to witnesses of the Western text-type, Alexandrian readings tend to be shorter; and are commonly regarded as having a lower tendency to expand or paraphrase. Some of the manuscripts representing the Alexandrian text-type have the Byzantine corrections made by later hands (Papyrus 66, Codex Sinaiticus, Codex Ephraemi, Codex Regius, and Codex Sangallensis).[5] When compared to witnesses of the Byzantine text type, Alexandrian manuscripts tend:

The above comparisons are tendencies, rather than consistent differences. Hence there are a number of passages in the Gospel of Luke where the Western text-type witnesses a shorter text — the Western non-interpolations. Also there are a number of readings where the Byzantine text displays variation between synoptic passages, that is not found in either the Western or Alexandrian texts — as in the rendering into Greek of the Aramaic last words of Jesus, which are reported in the Byzantine text as "Eloi, Eloi.." in Mark 15:34, but as "Eli, Eli.." in Matthew 27:46.

In Gospel of Matthew 27:49 was added this text: "The other took a spear and pierced His side, and immediately water and blood came out" (see: John 19:34). We can find this textual variant in codices: Sinaiticus, Vaticanus, Regius, and several other witnesses of Alexandrian text-type. Probably this text was added in a result of fighting with Docetism.

Nevertheless, there are some dissenting voices to this consensus. A few textual critics, especially those in France, argue that the Western text-type, an old text from which the Old Latin versions of the New Testament are derived, is closer to the originals.

In the United States, some critics have a dissenting view that prefers the Byzantine text-type, such as Maurice Arthur Robinson and William Grover Pierpont. They assert that Egypt, almost alone, offers optimal climatic conditions favoring preservation of ancient manuscripts while, on the other hand, the papyri used in the east (Asia Minor and Greece) would not have survived due to the unfavourable climatic conditions. Thus, it is not surprising that ancient Biblical manuscripts that are found would come mostly from the Alexandrian geographical area and not from the Byzantine geographical area.

The argument for the authoritative nature of the latter is that the much greater number of Byzantine manuscripts copied in later centuries, in detriment to the Alexandrian manuscripts, indicates a superior understanding by scribes of those being closer to the autographs. Eldon Jay Epp argued that the manuscripts circulated in the Roman world and many documents from other parts of the Roman Empire were found in Egypt since the late 19th century.[11]

Some[who?] of those arguing in favor of Byzantine priority further assert that the Alexandrian church was dominated by the gnostics who generally had either docetic views of Jesus (that the physical body was an illusion) or considered his life to just be an allegory that was not based on facts. Alexandrian popular proponents[who?] counter that the Byzantine church was dominated by Arianism (which is in opposition to mainstream Trinitarian Christological dogma) around the time that we first see evidence of the Byzantine text emerging. However, most scholars generally agree that there is no evidence of systematic theological alteration in any of the text types.

The evidence of the papyri suggests that, in Egypt, at least, very different manuscript readings co-existed in the same area in the early Christian period. Thus, whereas the early 3rd century papyrus

75 witnesses a text in Luke and John that is very close to that found a century later in the Codex Vaticanus, the nearly contemporary

66 has a much freer text of John; with many unique variants; and others that are now considered distinctive to the Western and Byzantine text-types, albeit that the bulk of readings are Alexandrian. Most modern text critics therefore do not regard any one text-type as deriving in direct succession from autograph manuscripts, but rather, as the fruit of local exercises to compile the best New Testament text from a manuscript tradition that already displayed wide variations.

Griesbach produced a list of nine manuscripts which represent the Alexandrian text: C, L, K, 1, 13, 33, 69, 106, and 118.[12] Codex Vaticanus was not on this list. In 1796 in second edition of his Greek New Testament Griesbach added Codex Vaticanus as witness to the Alexandrian text in Mark, Luke, and John. He still thought that the first half of Matthew represents the Western text-type.[13]

Johann Leonhard Hug (1765–1846) suggested that the Alexandrian recension was to be dated about the middle of the 3rd century, and it was the purification of a wild text, which was similar to the text of Codex Bezae. In result of this recension interpolations were removed and some grammar refinements were made. The result was the text of the codices B, C, L, and the text of Athanasius and Cyril of Alexandria.[14][15]

Starting with Karl Lachmann (1850), manuscripts of the Alexandrian text-type have been the most influential in modern, critical editions of the Greek New Testament, achieving widespread acceptance in the text of Westcott & Hort (1881), and culminating in the United Bible Society 4th edition and Nestle-Aland 27th edition of the New Testament.

Until the publication of the Introduction of Westcott and Hort in 1881 remained opinion that the Alexandrian text is represented by codices B, C, L. The Alexandrian text is one of the three ante-Nicene texts of the New Testament (Neutral and Western). The text of the Codex Vaticanus stays in closest affinity to the Neutral Text.

After discovering the manuscripts

75 the Neutral text and Alexandrian text were unified.[16]