Alexandros (Alex, Alexander) Margaritis Greek: Αλέξανδρος Μαργαρίτης; (born 20 September 1984) is a racing driver who is best known for competing in the German-based Deutsche Tourenwagen Masters touring car championship. Prior to that, his career had focused on formula single seater racing in Europe. Margaritis has dual nationality as a result of his place of birth and Greek parentage.

Margaritis had his first experience of karting in 1996, and in 1997, he competed in the ICA Junior class, in which he secured the championship runner-up position. He spent the next two seasons competing in the International Junior class in Germany, finishing 4th overall in 1999. In the following year, Margaritis made his single seater formula debut in the Formula BMW ADAC championship. In 2001, he achieved three podium finishes and one pole position on the way to 6th in the championship standings.

After one season in German Formula Renault, in which he finished 7th overall, Margaritis made his Formula Three debut in the first season of the new Formula 3 Euro Series. He achieved one podium finish and two pole positions during the first year and retained a place in the series in 2004. 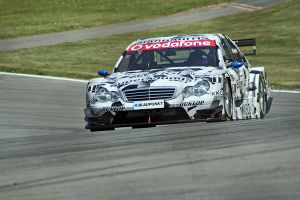 Margaritis driving for Mercedes-Benz (Persson Motorsport) in the 2006 DTM season.

In 2005, Margaritis moved from formula racing to touring cars when an opportunity arose in one of Europe's most high-profile touring car championships. He was signed by Mücke Motorsport, which was making the same transition between disciplines.

In a 2004-specification AMG Mercedes C Klasse, Margaritis did not achieve any points finishes; his best finish was 9th place at Spa-Francorchamps. He then moved to Persson Motorsport as the third driver in its 2006 line-up alongside Matthias Lauda and Jean Alesi. He was classified 11th in the standings, with a total of 11 points, and achieved a best finish of 5th position in the season's first race. Persson retained his services in 2007 alongside Paul di Resta and Gary Paffett. He finished 10th in the overall drivers standings with 16 points, achieving two 4th places.

On 27 February 2008, Margaritis announced his intention to leave the DTM and seek a position in another championship or category, citing as a primary factor the handicap of competing in year-old cars against machinery of factory specification.[1]

In 2008, Margaritis switched his focus to GT cars: He competed in the 24 Hours of Spa for Phoenix Racing. The Corvette C6.R failed to finish the race and was classified 37th.

After one season without racing in major series, Margaritis participated in the newly created FIA GT1 World Championship.[2] He drove for Triple H Team Hegersport and Phoenix Racing. In spite of not participating in all events he finished 7th in the overall standings.

Margaritis switched to the ADAC GT Masters in 2011. He and his partner Dino Lunardi won the driver's championship in their BMW ALPINA B6 GT3. In 2012 Margaritis switched to Team Heico to share a car with Lance David Arnold. The pairing finished 18th in their Mercedes-Benz SLS AMG GT3. Heico hired Magaritis for the 2011 and 2012 editions of the 24 Hours Nürburgring as well.

2013 saw Margaritis getting a part-time drive for H&R Spezialfedern GmbH & Co in the VLN.