Papanastasiou was the son of Member of Parliament Panagiotis Papanastasiou. He spent part of his childhood in Kalamata (1876–1883) and Piraeus (1883–1889). He studied law in the National and Kapodistrian University of Athens(1895–1898),earning his doctorate in 1899 and a licence in 1901. From 1901-1905 he studied social science, law and philosophy in the Humboldt University of Berlin (at that time "Friedrich-Wilhelms-Universität") and the Ruprecht Karl University of Heidelberg. In 1905 he goes to London, later on to Paris, continuing with his studies until 1907, when he decides to return to Greece. 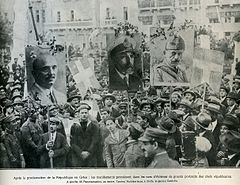 In 1910, Papanastasiou was elected for the first time to the Hellenic Parliament. He fought for agrarian reform in Thessaly seeking to break up the big farms that existed there since the rule of the Ottoman Empire and redistribute them to the local farmers. In 1916, he joined the "National Defence" movement of Eleftherios Venizelos in Thessaloniki which sought to bring Greece at the side of the Allies of World War I. He was rewarded with the governorship of the Ionian Islands.

After World War I, Papanastasiou took part in several Venizelos governments as Minister of Transportation, Minister of National Health and Interior Minister. When Venizelos lost the 1920 elections, he remained in Greece and criticised the People's Party governments under the successive Prime Ministers Dimitrios Rallis, Nikolaos Kalogeropoulos, Dimitrios Gounaris, Nikolaos Stratos and Petros Protopapadakis for their mishandling of the ongoing Greco-Turkish War of 1919–1922.

Along with others, he published a document entitled the "Republican Manifesto" which criticised the Monarchy, stating that Greece "...is the creation of the spirit, labour and struggles of her children. It is not the property of Royalty and no part of Greece can be sacrificed for the sake of personal interests of her monarch". For the publication of this manifesto, Papanastasiou was imprisoned along with the other signatories.

When the People's Party government collapsed, following the Asia Minor Disaster, Papanastasiou formed a government which, at his insistence, on March 25, 1924, proclaimed a Republic. The issue was submitted to a plebiscite with the voters approving the abolition of the monarchy on April 13, 1924. During his term of office, Papanastasiou also made proposals for the establishment of the University of Thessaloniki, the recognition of the common, demotic Modern Greek language, the establishment of adult education centres, etc. In 1926, Papanastasiou founded the Democratic Union.

From 1926 until 1928, he was Minister of Agriculture and was instrumental in the establishment of the Agricultural Bank of Greece.

Papanastasiou briefly served as Prime Minister once more between May and June 1932. In 1936, he was placed under house arrest by the government of Ioannis Metaxas.

Papanastasiou died of a heart attack on November 17, 1936.